The frames, strung up between trees on clothesline, looked like an art installation with their cast shadows and deliberate arrangement.

I had hung them in the sun after ripping out rectangles of darkened comb, in the hopes it would soften the hardened on propolis and remnants of solidified wax while, perhaps, providing some beneficial UV. It was right about at this stage that I started fantasizing about a massive solar wax melter – supers full of spent frames dripping in the midday sun, pouring out a spout at the bottom like liquid gold.

Shaking free from my fantasy, I opted for scraping. With hot weather settling in and basswood blooms opening, many of our colonies needed growing room; they blanketed the fronts of the supers. We had left this task for far too long, and had an immediate need for new frames to rotate into colonies and make splits.

Knowing what the right thing to do is and doing it are two different things. I know that regular clean up and maintenance of woodenware and rotating older darkened comb frames out are crucial activities for keeping bees happy and healthy. Yet, after years of moving myself and my bees to our new home I found myself pawing though stacks of frame filled supers trying to locate the least dark comb, while mumbling apologies to the girls every time I gave them one of these frames to try and clean up and store honey on – some of which they wisely refused to work. Although offering colonies older frames allows one to quickly assess which hives demonstrate hygienic behaviors, as piles of debris rapidly accumulate at hive entrances, it is just bad beekeeping practice.

In an attempt to avoid the work at hand I had already ordered additional frames; it is more fun to assemble than to scrape. Still, if I left the older frames sitting around they would turn to wax moth mush – making the clean up even more unpleasant. Beyond the stockpile of stripped down frames that needed clean up and foundation for immediate use, there were many older frames in the honey supers that would need to be rotated out and cleaned up after extraction. Most of the older frames were still solid and could be reused, and I had foundation on hand.

I had run out of excuses.

Procrastination is the mother of invention: sometimes a short delay in action is all that is needed to come up with a better way of doing things. In the past, I often scraped frames on a tarp, shaking the pieces of wax and propolis periodically to the center then into a bucket. This had the benefit of catching the scrapings for later candle making, but put wear and tear on my knees and back. What I wanted was a standing scraping station that would provide a surface for scraping frames, and supers, while catching the scrapings for easy collection. Using an acquired nightstand and assorted odds and ends, I assembled a sturdy, albeit ugly, scraping table, then set to work scraping down frames and replacing foundation. 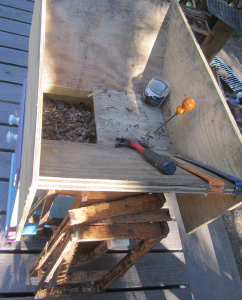 The scraping table proved to be a timesaving contraption that also saved on chiropractic fees.  It holds a super for cleanup and provides an abundance of solid surfaces to rest frames on for scraping. The sloped sides feed most of the scrapings into a drawer for easy removal. I dump the collected scrapings from there into a trashcan. The bottom shelf provides a storage area for tools. Hanging bars on either side hold frames, allowing me to load un-scraped frames on one side and transfer them to the other once cleaned up.

As I scraped down frame, after frame, after frame, after frame, I thought about my decade of beekeeping experience and my decision to move the bees with me. I had transferred colonies first to some vacant acreage an hour from where I was staying, and then to their new permanent location – as my new beekeeping and life partner photographed from the sidelines. This movement of colonies gave me a brief glimpse at the life of a migratory beekeeper, and reaffirmed my commitment to keep my bees, and me, stationary – I like to be attached to a piece of land where I can plant things and watch them grow.

Pollinating crops was the prime objective when I first started keeping bees. I still value the bees’ function as pollinators, but have realized that I now keep bees because I enjoy keeping bees.  Beekeeping is a lot like martial arts-you have much to learn, grasshopper. As with martial arts, in beekeeping one must be prepared for the unexpected, move with calm deliberate actions and conquer fears.  Likewise, there is the acceptance that what we know is a miniscule drop in the ocean of knowledge. The meditative time working the hives, the challenges associated with keeping bees alive (and well), watching the bees fly to and fro or flit about on flowers, exploring the world of honey plants and even the related tasks of maintaining equipment and extraction still holds me captive. Even the mundane task of scraping frames has some hidden allure, although I did sketch out preliminary plans for a solar wax melting unit, which I plan to construct in the “near future” – a flexible timeframe, as any beekeeper is aware.