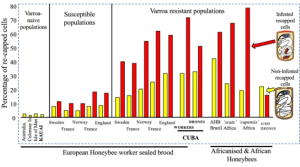 The Varroa destructor ectoparasitic mite has spread globally and in conjunction with Deformed Wing Virus has killed millions of honeybee (Apis mellifera) colonies. This has forced Northern hemisphere beekeepers into using miticides to avoid mass colony losses. However, in many Southern hemisphere countries widespread treatment did not occur since miticides were prohibitively expensive, or a centralised choice was made not to treat, both allowing natural selection to act. The Varroa mite initially caused high losses before mite-resistance appeared in the honeybee populations. Initially, mite-resistance was only associated with African and Africanised honeybees. Although recently, several isolated mite-resistant European honeybee populations have appeared. Here we studied the mite-resistance in Cuba and found high rates of recapping of infested worker cells (77%), high removal of mites (80%) and corresponding low mite fertility (r = 0.77). These are all traits found in all naturally evolved Varroa-resistant populations. We can confirm Cuba has the world’s largest European mite-resistant population with 220,000 colonies that have been treatment-free for over two decades and illustrating the power of natural selection. Cuban honeybees are also highly productive, 40–70 kg of honey produced annually, and are mild mannered. Cuba is an excellent example of what is possible when honeybees are allowed to adapt naturally to Varroa with minimal human interference.

We are here to share current happenings in the bee industry. Bee Culture gathers and shares articles published by outside sources. For more information about this specific article, please visit the original publish source: Recapping and mite removal behaviour in Cuba: home to the world’s largest population of Varroa-resistant European honeybees | Scientific Reports (nature.com)