Getting the most out of an IR camera. 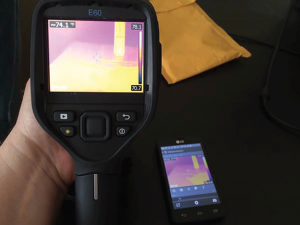 Last month, I wrote about using infrared (IR) cameras to image colonies before loading trucks and shipping bees. After arrival in California, Bill Fluke, the owner of Arlee Apiaries, called me to report that some of the colonies were not as strong as they had appeared from the front-of-the-hive IR images from the wintering shed; the bees had bunched up near the front of the hive. These colonies were queen-right and alive and looked good, but the actual cluster was smaller than expected.

When using any IR camera, you are imaging the heat of the outside surface of the hive.  IR is not a true through-the-wall imaging method. Anything that separates the cluster from the outside of the box will interfere with accuracy; a pillow wrapping for wintering, an inner hive cover, frames of honey and feeders, an extra deep cover, or a reflective surface such as silver paint or an aluminum covered lid.

Some materials thwart the camera. IR images through most clear and opaque plastics; for example, if I hold my hand behind a sheet of clear plastic, you’ll see both it as a visible image and the camera will pick up the IR image.  Switch out the plastic for glass, you’ll still see my hand, but the IR camera won’t see it. A sheet of black plastic will block your ability to see my hand, but black is an ideal color for IR imaging.

In previous articles, both Wyatt Magnum and I have presented a variety of applications for IR cameras based on visual or qualitative evaluation and interpretation of IR images.  However, my team is attempting to go to the next step, whereby the camera can be used as a quantitative tool.  Ideally, one could image a hive and a software app would instantly display some form of assessment category: dead, weak, suspect, strong, or even assign a grade.

Regardless of how you intend to use these cameras, both camera resolution and camera accuracy are important. I’ve discussed the resolution issue in some detail in previous articles. Here I’m going to address camera accuracy, image manipulation, analysis, and reporting software available for FLIR cameras.  Other manufacturers have comparable software. We’re most familiar with the free FLIR Tools that comes with FLIR cameras, as well as FLIR’s ResearchIR camera control and analysis software, marketed primarily for research and science applications.

Should you buy ResearchIR?  Absolutely not unless you are into research; it’s a superb tool, but expensive, and still won’t automatically produce a quantitative grading system for bee colonies. We use it for our research and development work, but it’s beyond the needs of most beekeepers.

Some years ago, Dr. Joseph Shaw and Paul Nugent at our sister institution, Montana State University, in Bozeman, compared our basic FLIR i7 camera to their high end research grade cameras.  At that time, the FLIR i7’s 19,600 pixels were considered to be as low a resolution as one could go and still obtain accurate, quantitative images of bee populations in hives.

We and the MSU team had two concerns, one was that the FLIR camera was specified to operate accurately at temperatures between 0°C and 50°C.  The other was calibration stability at different environmental temperatures.

The 0°C (32°F) limit was a concern since outside temperatures are likely to fall near or below freezing during early spring and fall.  During actual use this January where the wintering shed temperatures were around 38°F and outside temperatures at 14°F, our i7, E40, and E60 all functioned well.  We may have lost some accuracy of calibration, but we did not see any obvious differences between cool-temperature, indoor IR images of hives, and those of hives taken outdoors in freezing cold.

During their testing, MSU found that for the accuracy, of our i7 was best when the camera was kept in a stable temperature environment well before and during measurements. Rapid temperature changes in the ambient environment around the camera, or in the camera itself should be avoided. Since then, we have tested many FLIR cameras and have verified many of the recommendations from MSU. For maximum accuracy, it’s best to turn on the camera at least 20 minutes before using. Grabbing a camera from a heated vehicle, powering it on, and immediately imaging hives at near or below freezing temperatures can result in significant camera calibration drift.

It’s obvious to us that camera angle and distance are important to accuracy. New camera users often attempt to image hives at a distance and at odd angles. For maximum accuracy, it’s best to image hives from a distance of six feet (two meters) or less, looking straight on from the camera to the hive surface to minimize reflections of thermal signatures. On better cameras, manually setting the camera to bracket the expected temperatures of the hive itself will further discriminate the hive IR thermal image from background IR sources.

MSU also found that for painted wooden hives, camera emissivity should be set at “0.95 if the ambient air temperature is properly input into the camera; otherwise, use an emissivity of 1 to minimize biasing of the data.”  We’ve since discovered that painted versus unpainted hives, and some colors of paint like silver may require changes in emissivity settings. Unfortunately, even changing the camera’s emissivity setting may not adequately compensate for reflective surfaces like silver paint or metal hive covers.

Accuracy also depends on colony and hive conditions. Bees will cluster more tightly at colder temperatures. Cluster size increases with warmer temperatures. Colonies lacking brood or a laying queen won’t cluster, unless it’s cold enough to threaten the life of the adult bee population. A queen-less colony usually produces a diffuse heat signature, without the typical hot spot near the center. In warm weather, the best time to image colonies is in early morning, before sunrise. As soon as sunlight hits the hives, reflected heat may mask the cluster image. After a sunny afternoon, hives retain surface heat from the sun, and it may be difficult to image the cluster until well after dark. Wind and rain also affect hive surface temperature.  Colonies can usually be imaged on overcast days, but if it’s warm enough for the bees to fly, the colony may not cluster. 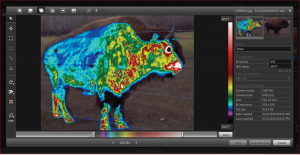 FLIR Tools is free-software bundled with FLIR cameras, and FLIR Tools+ is a purchasable upgrade. These are tools for controlling cameras, transferring and emailing images, manipulating color pallets, managing images, extracting quantitative data and measurements, analyzing temperature data, and generating reports. Aimed primarily at contractors such as electricians, plumbers, and energy auditors, these tools provide a means of analyzing images and reporting to customers. With FLIR’s recent marketing of inexpensive, entry-level IR cameras, the company has rapidly added a proliferation of variations to this software.  Originally available for Mac and PC desktop computers, FLIR Tools is now available as an app for iPhones, iPods, and Android phones and tablets. https://youtu.be/udfD1TIyBV4

Why pair a camera with a phone? I’ve found two major uses: (1) camera images can be emailed directly from the apiary, assuming you have a cell phone signal, and (2) many of FLIR’s cameras can be remotely controlled via a phone app. This can be useful for getting images from tight spaces such as between stacks of hives in a wintering shed; although the camera may have to be mounted on a very long stick. Walk along the top of the stacks, lower the camera, and use the phone to control the camera.

These cable, wireless, Bluetooth, Mac, PC, and Android communication issues can be a bit confusing and frustrating, especially if you assume that the camera-to-remote device communication will be the same across different platforms. We’ve found that this can be especially problematic on older Android phones and tablets. Most of FLIR’s cameras will communicate with most other devices via a USB cable; but wireless and Bluetooth capabilities vary considerably.  Furthermore, I found that documentation for FLIR TOOLS ranges from sketchy or almost non-existent for some of the newer mobile apps, and there’s a rather long learning curve for the PC and Mac versions. ResearchIR is even more complicated. 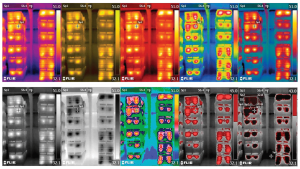 Once I learned how to use each of the versions of the FLIR TOOLS software, it seemed easy in retrospect. The fault, in my opinion, lies in the instructions provided by FLIR rather than shortcomings of the software.  Many FLIR TOOLS functions are hidden until one discovers where on the screen to click to open menus. In fact, I found hidden menus that even some of FLIR’s technical support didn’t know existed.

None of this should put you off from accessing and using FLIR TOOLS. It can be useful, informative, and a lot of fun. The best that I can do is try to make the experience less onerous.  However, none of FLIR’s software packages, including ResearchIR, will provide an easy to generate hive strength category or grade; that’s something we are working to develop.

For FLIR Tools, I think it is far easier to show you how to use it, and what it can do, than to try to describe it in detail. Working with the University of Montana’s School of Extended and Lifelong Learning, I developed a short video tutorial regarding image manipulation and basic image analysis that should make this much easier to understand.

FLIR Tools has three main components. The first is the ability to manipulate images such as changing color pallets, altering contrast, bracketing temperature ranges; all of which can alter the appearance of the image. This can be very useful for visual inspection and interpretation of IR images.  The second is the ability to pull out actual temperature measurements.  By moving the cursor, the temperature of any part of an image can be displayed. Choose a rectangle or ellipse to mark out and obtain the average temperature of any portion of an image; and FLIR Tools can determine differences in temperature from one part of an image to another. I highly recommend exploring these tools; you’ll learn a lot about the IR images that you take.

The third part of FLIR Tools is report generation; whether for your own use, communication with a work crew, or to a grower about the condition of the colonies delivered for pollination. Basically, it’s a set of pre-formatted templates where one can insert logos, company information, and some boiler plate text, select types of data to display, and then tag images for automatic insertion. It’s designed for a contractor to quickly and easily provide a report to customers; wherein the company, basic information, and data analysis can be standardized into a report that can be edited as needed and printed. Unfortunately, the included templates are designed for the trades that most commonly use these cameras. There’s no template for bee colony applications. The options are to work within the constraints of FLIR’s supplied templates, which I found to be cumbersome, or purchase FLIR Tools+. For $295, FLIR TOOLS+ adds imaging options such as being able to stitch images together for a panoramic view, record and play IR videos, and the ability produce custom templates and advanced reports using Microsoft Word.

Finally and most importantly, practice! Purchasing a camera will not automatically make you an expert in thermography. You have to learn how to use an IR camera and its tools. Image colonies before smoking, open to inspect, and learn what the camera can and can’t do.