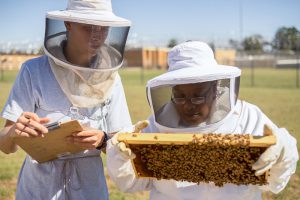 CLARKESVILLE, Georgia — “This is beyond just a feel-good program — we’ve had students learn to read just so they could participate,” Jennifer Berry, a doctoral student and research professional in UGA’s Department of Entomology, said. “It clicks in their minds that they can learn — through beekeeping they can learn.

“I was one of those teenagers — I wanted to be an actress. I went to college for theater but dropped out and got on drugs.”

This is certified beekeeper Joy Ishi (Cornett) Smith’s story. Or it was for a while.

After dropping out of college, Smith’s life continued a downward spiral, one she tried to stop by having kids.

“I thought becoming a parent would make me better; that didn’t work for me,” she said. “It’s not that they weren’t important, but addiction had a stronger hold on my mind than I thought it did. No matter how much I broke away, I couldn’t stay away, and it landed me in prison.”

While incarcerated at Arrendale State Prison in Habersham County, Georgia, Smith was involved in a Strategic Intervention Program, or SIP, which she describes as a boot camp for repeat offenders. It was while she was out marching that she first noticed the beehives.

The hives, separated from the outside world by 14 locked doors, are a part of the Georgia Prison Beekeeping Program.

According to a history produced by the University of Georgia Honey Bee Program, the Georgia Prison Beekeeping Program started at Smith State Prison in Tattnall County in 2012 when a prison resident, Roy Nichols, started talking with other residents about the bees he used to keep before he was incarcerated. The reminiscing turned into planning, and despite running into countless roadblocks, the initial class in Georgia launched with a single hive. It was enough for some of the early program participants to see the opportunity — both to learn and expand.

The first residents involved with the class received a prison certificate of participation but no official designation for their time and effort. A series of phone calls and meetings ensued, involving the then-warden of Smith State, an agent from UGA Cooperative Extension, a retired superintendent of public schools in Georgia, and Bear Kelley, then-vice president of the Ogeechee Beekeepers Association.

Kelley agreed with the need for a more formal certification, and his first call was to Jennifer Berry, apiculture research professional and lab manager for the UGA Honey Bee Program in the College of Agricultural and Environmental Sciences.

Berry and Kelley quickly got to work on the details of a certification program at Smith State. Once the first class was certified, there was an immediate waitlist for the program.

Since the program’s inception, more than 150 beekeepers have been certified, including several at the master beekeeper level.

“This is beyond just a feel-good program — we’ve had students learn to read just so they could participate,” Berry said. “It clicks in their minds that they can learn — through beekeeping they can learn.”

In the yard at Arrendale, Smith would find herself picking and eating dandelion greens to prevent illness. Although her small access to the outdoors was surrounded by razor wire, being in nature was intrinsic to her quality of life, something that was not lost on the director of programs at the prison.

Smith was introduced to master beekeeper Julia Mahood, a volunteer beekeeping instructor at Arrendale and prison committee chair for the Georgia Beekeepers Association. With the help of Mahood and master beekeeper and program volunteer Virginia Webb, Smith realized her true passion for nature, the outdoors and the honey bee.

“The first time I went out to the hives and put on a bee suit, they were everywhere. Pinging off my suit. I fell in love with bees in that moment. I cried,” Smith said. “These little things affect everything out there. They make things thrive by pollinating them. There is so much they can do. I realized in that moment how small I was in the universe. All those things that I did previously were completely irrelevant to what I could do moving forward. I got very serious about beekeeping. I had plans.”

To read the whole article go to;

We are here to share current happenings in the bee industry. Bee Culture gathers and shares articles published by outside sources. For more information about this specific article, please visit the original publish source: Prison beekeeping provides hope for those incarcerated (yahoo.com)