Until a few years ago the occurrence of diarrhoea and crawling bees in Spring was regarded as typical for Nosema infestation. Since the turn of the millennium, this has changed fundamentally. Today, Nosema is rarely accompanied by diarrhoea, but crawlers can still be found, and now throughout the year. A ‘new’ Nosema species originating from Asia has everywhere replaced the former one. The fact that the Nosema pathogen is now classified as a fungus and no longer as a bacterium is of less practical importance.

Host change in Asia
Nosema apis is the original parasite of the Western honey bee Apis mellifera. It multiplies in the cell walls (epidermis) of a bee’s midgut and obstructs protein production. The Asian honey bee Apis cerana is exclusively affected by Nosema ceranae.

In China in the 1970s Nosema ceranae was found for the first time in newly introduced Apis mellifera honey bees. Since 1998, this ‘new’ parasite has spread all over the world, and within a short time has nearly eliminated Nosema apis. According to our examinations in Southern Germany, the replacement took place within one to two years from the beginning of 2003. In places with higher bee density, change was more rapid. 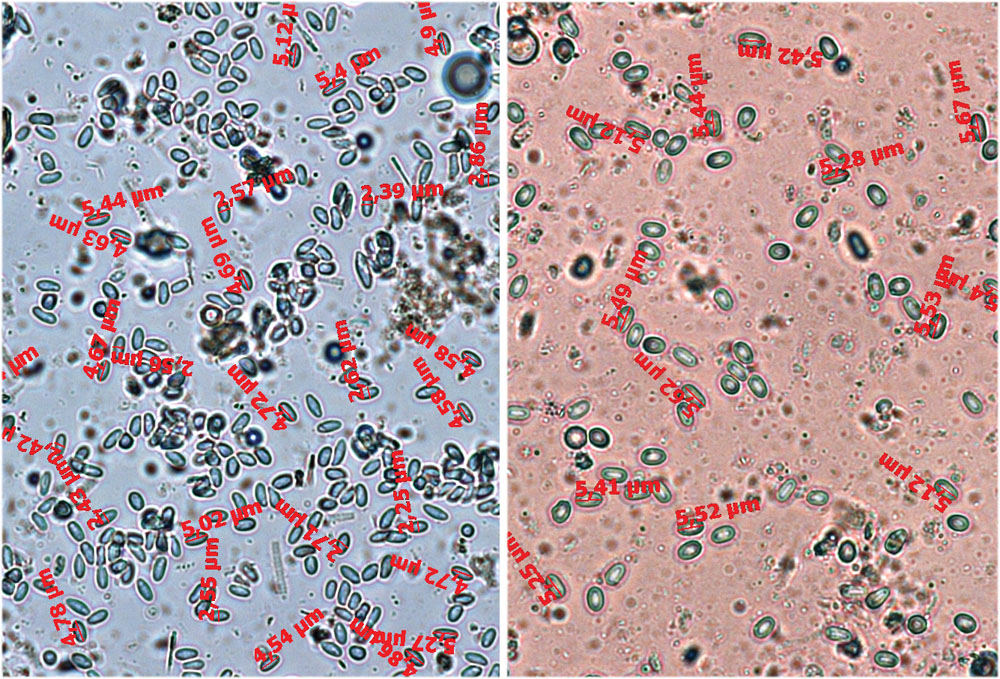 At 400x magnification, the slightly smaller spores of Nosema ceranae (4.4 x 2.2 µm, left) are only distinguished from those of Nosema apis (5-7 x 3-4 µm) after meticulous measuring.

Similar but genetically different
Under the microscope with 400x magnification, the slightly rounder and generally smaller spores of the Asian Nosema can be distinguished from the spores of the original endemic species, but only after meticulous measuring of a large number of spores followed by statistical evaluation. A clear identification is possible only with molecular genetic methods with Polymerase Chain Reaction (PCR). This method enables easy recognition of multiple infections. Nosema ceranae can be identified in other bee organs, such as the Malpighian tubules and different glands. As these examinations are not available for Nosema apis, it is unknown whether this is typical for the ‘new’ species, and is of any practical importance.

Temperature survival
Both Nosema species multiply best at the normal brood temperature of 34°C. Above 37°C, Nosema apis can no longer develop, whereas Nosema ceranae still completes its full cycle. Many spores can survive above 60°, when Nosema apis has been killed. Below 34°C, Nosema cerana develops less favourably. After 24 hours of frost, the majority of spores are dead, while Nosema apis maintains its pathogenic power for longer. This is why we can store Nosema apis deep-frozen spores for years for use in examinations. 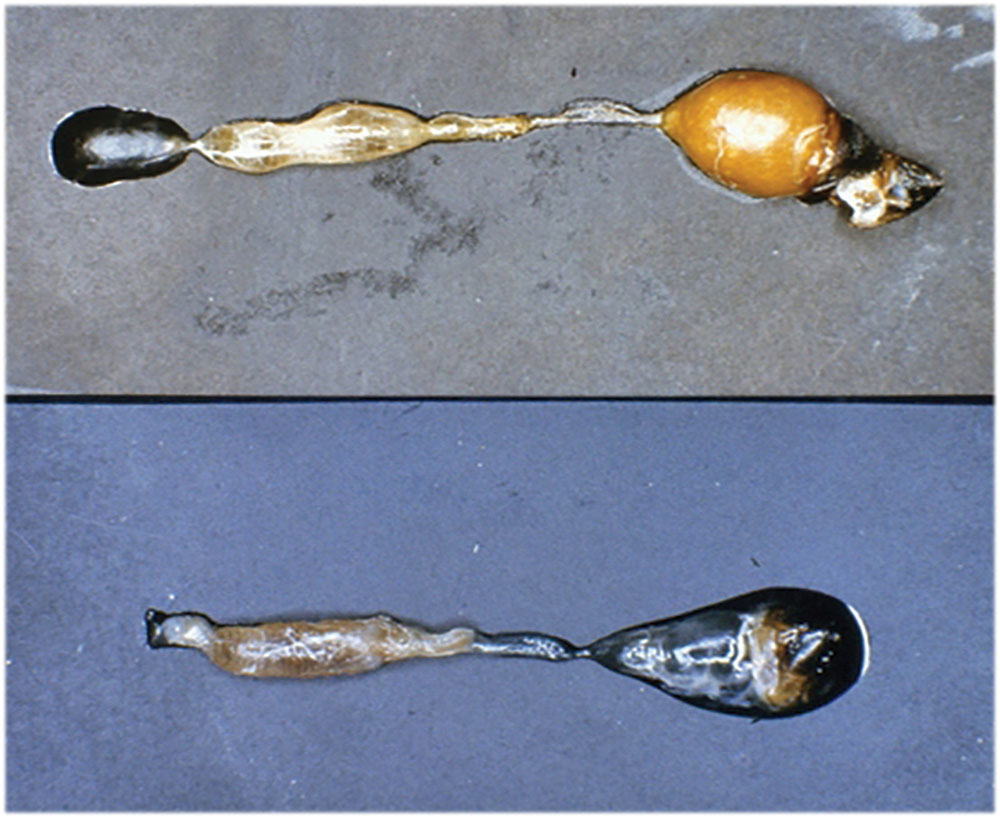 Clinical symptoms
Traces of diarrhoea inside and in front of the hive are typical for Nosema apis. Weakened bees often crawl at the entrance hole. Gradually the colony became weaker and most often died. Also with the ‘new’ Nosema ceranae, crawling bees are seen in front of the hive, but visible diarrhoea occurs rarely, and spots of excrement are infrequently found. The colonies are weakened throughout the year and do not develop properly. The total losses with empty hives (after all the ill bees had left their colony) experienced in Spain and other Mediterranean countries have not so far occurred in Germany. Obviously, this is due to Nosema ceranae’s poor tolerance of cold and its better multiplication capacity in warmer climates. 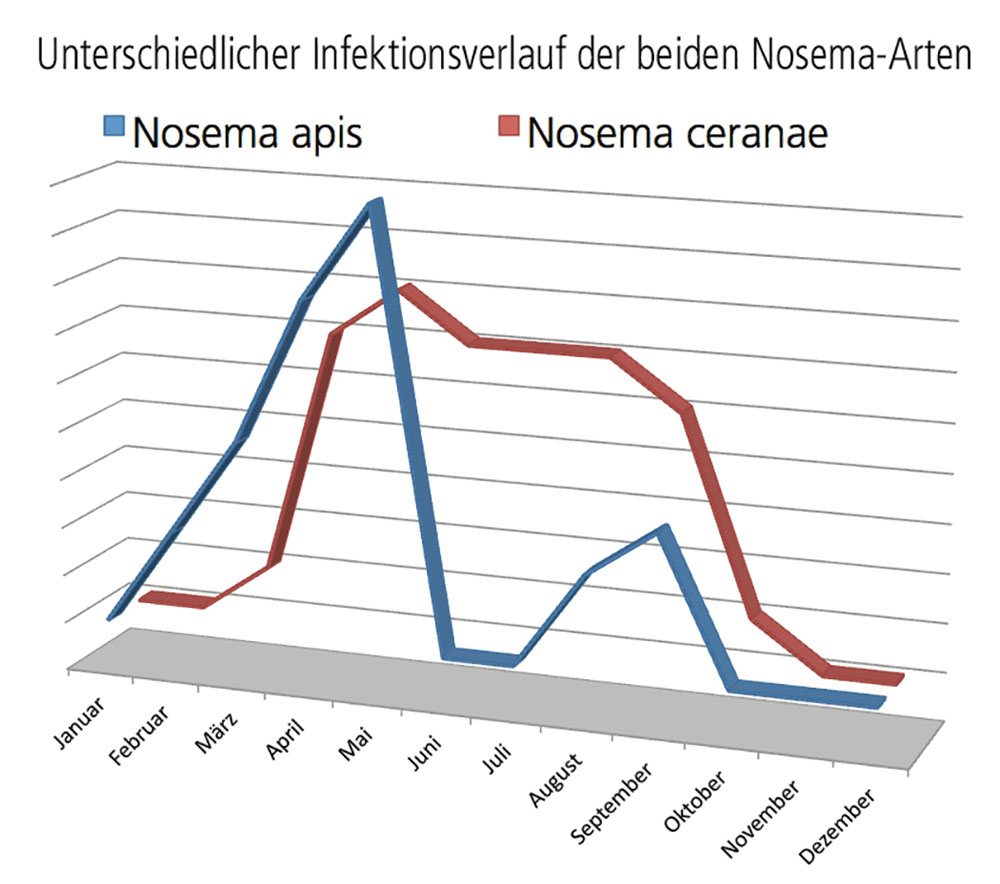 Unlike endemic Nosema apis, imported Nosema ceranae appears throughout the year and is able to multiply in short-living, Summer bees.

Perennial symptoms
Nosema apis multiplies sufficiently only in olderbees. Strong infestations by Nosema spores therefore appear in spring and to a lesser extent, also during harvest, at the time of rearing longer-living Winter bees. Problems with Nosema mostly occur after years of poor forage conditions and with long-living bees. In general, this seems to be true also for Nosema ceranae. However, this species can multiply well in shorter-living summer bees, and thus causes typical symptoms, especially crawling bees, throughout the year.

Increase bee turnover
With Nosema apis it was important that the bees in the hive are not too old and that infested ones are replaced by younger ones as soon as possible. As Nosema ceranae causes damage more rapidly, you should ensure that there is a regular bee turnover throughout the year:

Optimise food supply
Sufficient food supply has always been important for bee colonies. In many countries, commercial enterprises offer restoratives for Nosema control. We have not tested all of them. The effects of some have been controversially discussed. 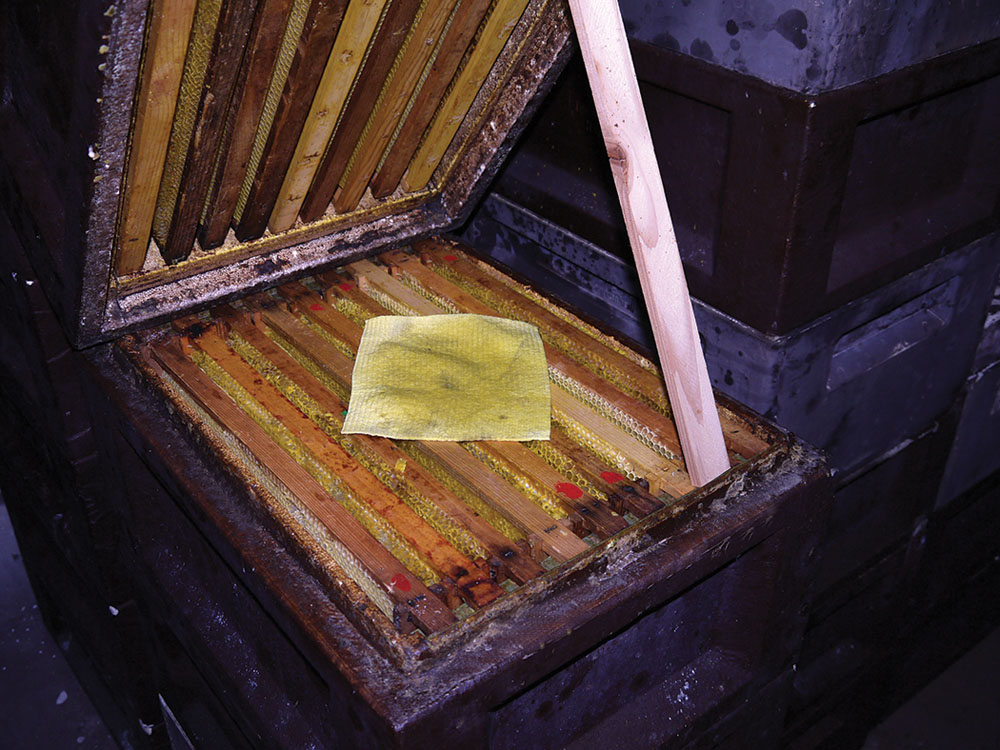 To disinfect combs, place a sponge cloth impregnated with 60% acetic acid between the supers.

Disinfect combs and comb equipment
Nosema spores can be found everywhere in the bee colony. Bees pick them up during cleaning and distribute them. To support self-healing, the number of pathogens has to be reduced, therefore eliminate as many sources of infection as possible:

• Combs of dead colonies are treated with 60% acetic acid over absorbent materials, such as sponge cloth and felt plates (for 10 combs you need 120 ml of 60% acetic acid).
• Deep-freeze food combs for at least 24 hours.