Pollinators Prefer a Dash of Salt in Their Nectar

Will gardeners of the future bribe bees and butterflies with homemade, saltwater solutions? Plants could already be employing the same technique. 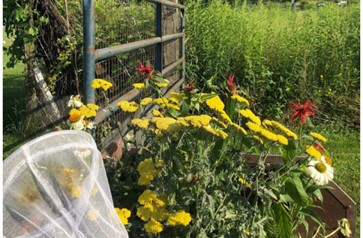 From coffee to blueberries, more than 75 percent of the leading global-scale food crops — and nearly 90 percent of all wild flowering plant species — rely at least partially on pollinators like bees, ants and butterflies. Because these insects are so essential to our own food systems, scientists are seeking new ways to keep them healthy and fed.

One approach could involve sweet-and-salty nectar, according to new research. A team led by University of Vermont undergraduate Carrie Finkelstein placed five plant species — half of which contained an artificial, sodium-enriched nectar — in a meadow about the size of a basketball court and observed them for three hours a day. As reported in Biology Letters earlier this year, the flowers enriched with sodium attracted twice as many pollinators as their blander equivalents.

Previous work on honeybees has shown that they can detect sodium with their legs, of all things. But knowing they savor the salt could help small-scale and home gardeners attract bees and butterflies to their garden. Gardeners could, for example, “hack” the system by depositing a solution containing 1 percent salt on the parts of their flowers that dispense nectar (which varies depending on each plant species’ anatomy). First, however, researchers must determine the effect that this might have on the health of both pollinators and the pollinated.

Most existing research focuses on macronutrients, like nitrogen and phosphorus, but the lesser-appreciated micronutrient sodium could possibly change our understanding of plant biology altogether. “It’s been incredibly under-studied,” says Nate Sanders, a co-author of the newest study and an ecology professor at the University of Michigan.

One theory is that plants don’t want sodium in their leaves because it causes animals to munch them down to nothing. To illustrate this, Sanders recalls a “failed experiment” he conducted in a mountain meadow in Colorado years ago: In one quadrant of the meadow he sprayed saltwater and in another, he sprayed pure water. When he returned 24 hours later, expecting a leap in insect abundance, he was shocked to find the meadow had been completely mowed down by mule deer — who apparently also enjoy a salty meal.

Sodium might also suck the water out of flower cells. For these reasons, plants could shunt it to their nectar, attracting more pollinators to the flower and saving its leaves from being devoured. “It’s an interesting trade-off,” says Finkelstein. “Plants don’t like sodium. And so, how can you balance one thing that could potentially be beneficial — to be surrounded with organisms like pollinators — without compromising the integrity of the plants in which they’re visiting?”

A Matter of Taste

Pollinators Prefer a Dash of Salt in Their Nectar | Discover Magazine

pollinators prefer a dash of salt