Persimmons are excellent additions to the bee garden. Very suitable for hedges and espalier, the handsome, ornamental, picturesque, small to medium sized trees provide bees with nectar and pollen. Members of the ebony family, most persimmons are native to the tropics.

The Latin genus name comes from the Greek and means “grain of Jove.” Worldwide, there are between 200 and 475 species.
Bees work persimmon flowers from sunrise to sunset throughout the day. Typically, most trees bloom for about two weeks or so. They provide a very heavy, somewhat irregular nectar flow. Due to the flower shape, the nectar is unaffected by rain. The trees can bring an early honey crop.

Eaten fresh, frozen, canned, and dried, persimmons are used for preserves, breads, pudding, wine, beer, and vinegar. The roasted seeds are made into a coffee-like beverage.

General Description
Sometimes forming thickets, the trees feature interesting branch patterns and deeply furrowed bark, resembling alligator hide. About four to six inches long, the shiny, leathery, alternate, deep green leaves can vary in shape from broadly ovate to lance-like. Depending on the species, they turn purple, yellow, or red in the Fall.

The lovely, waxy, scented blossoms can be bell, urn, or cup shaped. These contain corollas with three to seven lobes. The male and female flowers usually open on separate trees, mostly on old wood. While the former are solitary, the latter typically form trios on small, axillary clusters.

Sometimes shiny, the fleshy, juicy fruits are large berries. These contain a number of large seeds.

Growing Persimmons
Pollination is generally beneficial even when a tree is known to be self-fruitful for this leads to a better fruit set and larger fruits. This also prevents premature fruit drop. Bees are primarily responsible for pollination with some wind pollination occurring. 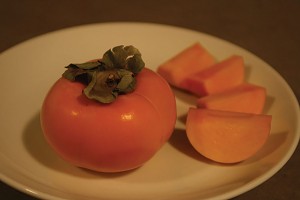 With a slow growth rate, all persimmons are easy to grow. Sometimes planted in tubs, Asian persimmons are suitable for shrub borders. Persimmon trees are generally planted during the Fall or Spring. Container-grown and balled-and-burlapped plants are more likely to survive transplanting.

Before choosing a variety, become familiar with its mature size, hardiness, and pollination needs as well as its flowering and fruiting habits. Generally, Asian trees are planted 15 to 20 feet apart while the native species need 35 feet between plants.
Intolerant of salt, persimmon trees can withstand heat, floods, wind, neglect, and typical city conditions. Full sun is generally best.

Water the trees as needed until they’re well established. Although mature trees are generally drought tolerant, their fruits can drop during dry weather. Weeding is also recommended.

Thin the fruits on Asian persimmon trees to one or two per shoot or ten inches between fruits. This helps to minimize alternate bearing. When heavily laden with a heavy crop of fruits, the branches often need a support.

Top dress the trees with compost any time of the year. Mulch is beneficial, especially during the Winter. Fertilize only if the trees fail to grow a foot a year.

Recommended Persimmon Species for Bees
At least four species of persimmons are either native or cultivated in the U.S. These include the following.

American Persimmon (Diospyros virginiana)
This occurs from New England, New York, and the Atlantic states to West Virginia through the Midwest and Great Lakes southward to the Everglades and Mississippi westward to Missouri, Kansas, Arkansas, and Oklahoma into Texas and the Colorado River Valley. Often suckering, the trees are less common in the North than elsewhere. They’re found along fence rows and highways as well as in old fields, dry woods, strip-mined areas, eroded wastelands, slopes, and clearings. Sprouts can arise from burned stumps.
Suitable for the dry West, American persimmon is the hardiest species. A long lived tree that can reach the century mark, this thrives in zones five through nine.

The attractive tree develops a narrow, somewhat rounded, symmetrical crown and pendulous branches. It is usually 30 to 60 feet in height, depending on growing conditions. However, the plants have reached 90 to 100 feet with a 30 foot spread in forest settings. Seedlings grow more slowly than cultivars.

The partially concealed, waxy, heavily scented, fairly small, inconspicuous blossoms typically begin opening from May to June in most locations. These can be white, greenish-yellow, or whitish-green. Males are less than ½ inch long. With lobed, yellow corollas, the females are slightly larger.

Quite tasty when ripe, the smooth-skinned fruits are richer flavored and smaller than those from Asian trees. Variable in shape, they’re typically plum or tomato-shaped with deep orange to yellow skins blushed with red. Usually an inch across, their size varies from ¾ inch to two inches in diameter. These taste astringent until they’re fully ripe. Frost isn’t essential for ripening to occur. Most persimmon fruits contain one to eight seeds.

Fernando de Soto was probably the first European explorer to see the trees when he traveled on the Mississippi River in 1539. Some early attempts were made to find superior varieties. Commercial interest in American persimmon dwindled once the Asian was introduced.

Outstanding or superior American persimmon varieties include Meader, Early Golden, Garretson, John Rick, Ruby, and Yates.
American persimmon is an important source of nectar and pollen in the South and Southeast from Virginia into the Carolinas westward to the Plains, Missouri, Arkansas, Oklahoma, and Kansas. It is a major nectar source in at least five states and of some value in 22 other states.

The nectar and pollen help to build up the colonies. This tree provides an early honey crop, usually about 75 pounds. The honey is light amber to amber and mild flavored.

Asian persimmon (Diospyros kaki)
Apparently native to Asia, Asian persimmon has been grown in Japan for at least a thousand years. These are also widely cultivated in India and China.

The trees reached the Mediterranean region about a century ago and were introduced to Europe in the late 1700s. Hardy in zones seven through 11, they arrived in America beginning in the 1850s. At least 25 to 85 cultivars were introduced over a period of years.
Although thousands of cultivars are likely available worldwide, far fewer can be found in America. Production in the U.S. has fluctuated over the years, averaging around 3000 acres nationwide. Much more popular than the native species, the long lived Asian persimmon is a wonderful addition to the home landscape. 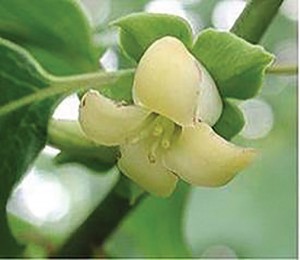 Variable in shape, the large, alternate, thick, leathery, deep green, shiny leaves are three to eight inches long. They’re somewhat hairy underneath. Foliage in the Fall can be yellow, red, or orange. The leaves drop earlier than those of the American persimmon.

Opening on new wood during the Summer – usually in June – the small blooms, ½-inch wide and ¾-inch in length, can be light yellow or whitish-yellow. Blossoms can be male, female, or perfect. In some cases, a single tree can bear all three types. The females feature whitish-yellow petals. The males appear in trios.

The shape of the fruits as well as their skin and flesh color, and size varies considerably, according to the variety. They can resemble a plum, tomato, or heart.

Asian persimmons usually ripen in October or after the leaves drop. They vary from about 1½ to four inches in diameter. The thin, smooth skin is often covered with a whitish bloom. This can ripen to orange, orange-red, yellow-orange, or yellow. Pollinated fruits can have eight to 10 seeds. The flesh ranges from red to yellow-orange, brownish-red, or orange.

They’re grown commercially in Florida and California and to a limited extent in parts of Texas, the southern states in the “Cotton Belt,” and along the Atlantic to Connecticut and Pennsylvania. Outstanding varieties include Fuyo, Fuyu, Saija, Ichikikeijiro, Great Wall, Hira-tanenashi, and Surugu.

Date Plum (Diospyros lotus)
Also known as false lote-tree, this is native from North Africa to Asia Minor. Although its origins are somewhat unclear, this has long been cultivated, mostly as an ornamental in temperate Asia – especially Japan, China, and Korea – to the Himalayas and the Mediterranean region. This was mentioned in the writings of Homer.
Cultivated in the West since 1597, date plum is suitable for zones six through 10. It is similar to American persimmon. This round headed, spreading tree is usually 30 feet in height and 20 feet wide. Given optimal growing conditions, it can be 40 to 45 feet tall.

The young branchlets are hairy. Fuzzy on the upper surface, the shiny foliage, five inches long, varies in shape.

The female blooms reach 1/3 inch in length, while the males are slightly shorter. Opening mostly in June, these emerge from late Spring to early Summer. They’re whitish-green or green with reddish tinges. Bees eagerly work these flowers for nectar.

About the size of a cherry, the globe-shaped, edible fruits are eaten fresh and dried. Initially yellow, they ripen to black, purple, or brownish-blue. These usually contain flat, brown seeds.
Date plums taste sweet and astringent at the same time. The flavor is somewhat like that of a date. They’re best eaten when dead ripe.

Often featuring multiple, straight trunks, this lovely upright tree with gorgeous, silvery, peeling bark develops a narrowly rounded crown. The small to medium sized plant ranges from 10 to 40 feet in height and about half as wide, depending on growing conditions. Hairy when young, the stout branches are often crooked.

The leathery leaves are up to two inches long and an inch across. Often semi-evergreen to evergreen in warm climates, these can be hairy on both surfaces. Variable in shape, they’re typically fairly broad towards the center.

The small, creamy white, five-lobed blossoms develop in April when the leaves have partially unfurled. Featuring long, creamy white petals with fringed margins, the male blossoms form hairy, drooping, slender clusters. With longer petals and larger lobes than those of the male flowers, the females open either singly or in pairs.

The small, edible, cherry-like, hairy, soft fleshed, one inch fruits ripen to black. With a melting texture, Texas persimmons taste very sweet. They’re eaten fresh and dried. In the Rio Grande Valley, these have been used to dye sheep skins.

Adapted to most any soil type and pH level, Texas persimmon dislikes high moisture levels and high humidity. Tolerant of drought once it is well established, this native species prefers full sun or partial shade.

Texas persimmon is an important nectar source in the state. This plant can provide a good honey crop.

Connie Krochmal is a writer and a beekeeper in Black Mountain, South Carolina.