Pandora, of classical Greek mythology, was given a box which contained all the evils of the world. When she opened it, all the evils flew out, leaving only “hope” inside once she closed it.

Today, climate change, in addition to the genetic traits of the Africanized Honey Bee, may be creating a modern-day Pandora’s box.

In 1956, the Brazilian experiment to reduce the defensive, aggressive behavioral traits of the African honey bee failed. The bees were given away, swarmed, mated with feral European honey bee queens, and created the hybrid offspring known as “Africanized honey bees.” The evil was out of the box. 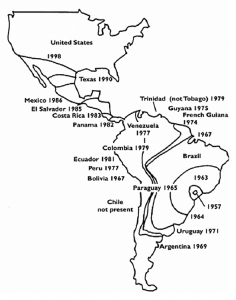 Map 1 – Expansion of the Africanized honey bee from Brazil through South and Central America and the United States by area and year.

As with Pandora’s actions, introducing the African honey bee to Brazil seemed small and innocent, but it turned out to have severe, detrimental and far-reaching negative consequences.

Warmer Summers and milder Winters associated with climate change and additional traits such as adaptation and changes in genetic makeup; the Africanized honey bee’s ability to resist pests and pathogens; the genetic superiority and dominance of the Africanized honey bee; and frequent swarming and absconding; have led to population increases and expansion of territory. 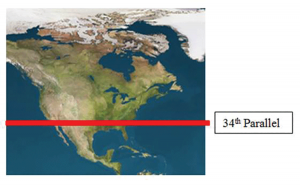 Map 2 – Where the 34th Parallel crosses.

This is particularly significant since there are recent losses of European honey bee populations due to health and nutrition issues and the critical need for agricultural pollination. As the aggressive behaviors of the Africanized honey bees move into new, previously uninhabited areas, there is an immediate need to increase public awareness of the dangers associated with Africanized honey bees.

One trait of the African honey bee that exacerbates this rapid expansion is their “restless attitude.” They stay in a location only long enough for the available forage to dwindle, then leave for a new location with more expansive floral resources. This behavior is critical in tropical environments where the bees migrate with the seasonal rains. In Africa, honey bees travel at a rate of 200 – 300 miles per year. They also construct smaller nests with less honey storage necessary to survive a lengthy, cold season.

Early researchers predicted the northern limit to be south of 34o latitude. One factor that changed this “Northern Ceiling” is climate change. As our winters became milder, the region of habitability expanded further north.

Joshua Kohn, a professor of biology at The University of California San Diego stated that, “higher temperatures caused by global warming could mean that Africanized honey bees may continue to push north in the coming years.”

In January 2017, both NASA and NOAA reported that the earth’s 2016 surface temperatures were the warmest since modern record keeping began in 1880. Most of this warming has occurred in the past 35 years, with 16 of the last 17 warmest years on record occurring since 2001. NASA’s Goddard Institute for Space Studies Director Gavin Schmidt  remarked, “We don’t expect record years every year, but the ongoing long-term warming trend is clear.”

There is little disagreement that previously known cooler areas are becoming warmer. In late 2015, the American Meteorological Society published the 26th edition of a peer-reviewed series titled “The State of the Climate.” This report highlights the previous year’s record heat, global surface recorded temperatures, and the majority of indicators reflect climate change trends consistent with long-term global warming. 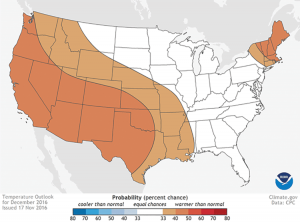 Scientists in the Climate Prediction Center of NOAA, are also projecting higher temperatures for the year 2017. Their work includes the review of historical records to see how temperature conditions behaved as a result of similar conditions in the past. Map 3 is a map illustrating the expected forecasts for above-average temperatures to expand principally northwest, north and in isolated areas of New England. Managers in agricultural industries utilize this group’s analysis to help them optimize food production, in which honey bees play a critical role.

On November 15, 2016, the U.S. Drought Monitor Project run by NOAA published a paper titled “A Trio of Drought Hotspots Across the United States.” This paper supports the forecast prediction by the Climate Prediction Center of warm temperatures and lower than average precipitation particularly in California, the Southeast United States, and New England. These three areas have experienced severe, extreme, or exceptional drought conditions and are considered “hotspots.” 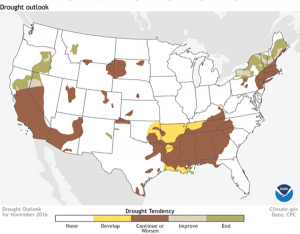 This data along with the length of the frost-free season (and the corresponding growing season) has been increasing nationally since the 1980s. With the largest increases occurring in the western United States, affecting ecosystems and agriculture. Heat waves have become more frequent and intense, especially in the west. Cold waves have become less frequent and milder across the nation. Map 4 is a map reflecting the areas expected to experience more intense heat waves, and less intense cold waves.

Based on the research articles and the projections of warming weather, milder Winters, and drought expectations, new portions of the United States are or may experience climate conditions conductive to the range expansion of the Africanized honey bee.

Over time, the European relatively docile trait is lost when the Africanized bees dominate an area. In addition, over time European alleles will largely disappear mainly due to the continued migration of African genotypes into an area and the possibility of hybrid workers exhibiting reduced fitness.

Along with the larger number of drones produced, the number of times an Africanized hive will swarm allows them to dominate a greater geographic area.  Compared to a European colony which may swarm one to two times a year, the Africanized colony may swarm five to six times a year.

Absconding, or abandoning the hive is a trait that occurs regularly with Africanized honey bees, as opposed to the number of times European bees abscond.  Absconding colonies differ from a reproductive swarm, in that no workers are left in the original hive to produce a new queen.  Absconding typically occurs when the hive is disturbed or resources are no longer available. These relocations have been documented as far as 100 miles or more away from their original site, to locate abundant, nutritional floral resources. 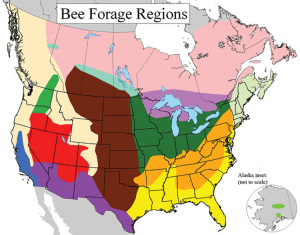 Map 5, titled Honey Bee Forage Map, was created from information gathered by G.S. Ayers and J.R. Harman, both of Michigan State University, reflecting the bee forage regions of North America, based on native flora distribution and land use patterns. When comparing Map 5 with Map 1, a map showing when and where Africanized honey bees were discovered, it is not surprising to see that the migration of the Africanized honey bees traveled through the geographic areas of the Southwestern United States and into California.

The expected warming and drought conditions in the Southeastern United States, will create an environment conducive to the Africanized honey bee. The warming associated with “hot spots,” and available bee forage will provide a “migration corridor” into colder areas.  Warmer climates and reduced European bee populations could influence the increased expansion of the range of the Africanized honey bee.  However, what remains to be determined is if they will establish a permanent, feral population, or if they will only be “seasonal visitors.”

Genetic dominance, frequent swarming and absconding traits, and the lengthy distances traveled could allow the Africanized honey bees to travel up to 300 miles in a season. This distance along with their ability to take over an established European hive could furnish the invaders the honey stores necessary for colder climate survival.

There also exists the real possibility of the Africanized honey bee spreading inadvertently by human assisted transport, either by the shipping of individual packages of bees from Africanized areas, or the movement of managed beehives for agricultural pollinization.

The professional beekeeper and the hobbyist can and will learn how to manage aggressive Africanized hives. However, the nature of the Africanized bee may cause future beekeepers to reconsider taking on this venture, particularly in urban areas.

Given the certainty of climate change, it is not a question of whether the Africanized honey bee will expand their range and be introduced to new areas, but what evils from Pandora’s box we will face over the next 20 years. While it is difficult to make any firm predictions of the final distribution of the Africanized honey bee, it is critical that the public becomes aware of their nature before they arrive and become established.

As stated in the 1988 magazine, Science, in an article titled: USDA Fights to Repel African Bees’ Invasion, “When the bees attack their first victim, the whole debate will change from a beekeeper’s problem to a public problem. The day that a toddler is attacked by a feral swarm of Africanized bees, could spell the end of beekeeping as we know it.” And, as already reported incidents where the public and these bees have interacted are occurring with, albeit slowly, increasing frequency.

Africanized Honey bees are here to stay and may become our principle agricultural pollinator.  Imagine the public outcry if a semi-trailer truckload of Africanized honey bees were to overturn in any community. The only thing that remained in Pandora’s box was “Hope,” but hope is not a plan. We can hope for the best, but we must plan for the future. Lessons from the past have taught us to co-exist with nature, not seek to control it.

Ed Erwin is the Executive Director of Bee Harmony and a Master Beekeeper  with the University of Montana program.

Parasitic wasp proposed to stop citrus psyllid, and Citrus Greening APHIS is advising the public that a draft environmental assessment has been prepared by…