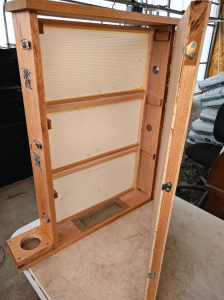 I love observation hives! Instantly engaging and fascinating to anyone, they provide a literal window into the secret lives of humanity’s most important insect. The casual observer and the experienced beekeeper can both learn and enjoy in comfortable convenience. My interest in observation hives started with a volunteer beekeeping gig at our city’s nature center. As part of their educational exhibit hall, there is an observation hive that needed attention and ongoing care. I was hooked at once and started looking into designs and construction methods to make my own. I also ended up helping two local schools with their OH’s; one associated with the Bee Cause and another with my own design.

My first design was an eight-frame in a 2×4 setup. It’s the kind that pivots on the wall and has a tube to the outside through a window gap. It follows some of the specifications provided in the Bonterra plans. Bonterra sells complete OHs or you can purchase plans for a reasonable fee. We keep it on our sun porch. My wife and kids like it almost as much as I do! There’s nothing like the fun of watching them bringing in pollen, communicating with each other and seeing the queen laying. It’s also educational and helpful with timing beeyard activities. 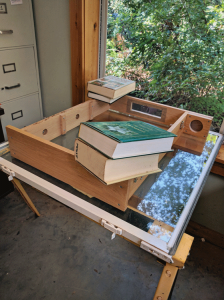 There’s just one thing about observation hives that really bugs me: having to pick them up and carry them outside to work on them. The one on our sun porch was made with lots of Oak and is probably 100 lbs full. The one at the nature center where I still volunteer is built with durability and public safety in mind. It weighs 150 lbs empty! One of the school OHs is made from thinner pine so it’s lighter but it worries me. It’s just not that sturdy. In my travels, both real and internet, I found some interesting design ideas to get around this. There’s a country store in the nearby mountains that sells honey and other hive products. They keep a hive with glass sides behind a glass wall. It’s like a closet but accessed from outside. It’s very nice but the bees are too far from the glass to see closely. A beekeeper I found on the web actually converted standard Langstroth deeps and mounted them against a window on his house. Both ideas served as inspiration for my design.

My goals for the new design were as follows. It needed to be easily worked from the outside, function well for a colony to thrive, be economical and have a reasonable percentage of display area to see hive activity. I really liked the idea of using an existing window so that’s where the plans began. Why not put the whole thing right on the glass!? I’m very lucky to have my office where I live and the windows are large with undivided glass. Would it be too heavy? Would some heating or cooling stress break the glass? Would it be possible to get good adhesion? A quick trip to the internet revealed a plumber’s video in which he tested a little blob of clear silicone holding a hook on a tile wall. The next day he hung a six pack of Guinness from it. I was convinced! What about overwintering? Would the colony be able to cluster properly? How many frames deep should it be? If it was built five frames deep, the weight would pull on the glass more and I might never see the queen or brood at all. In the end, I decided on three frames deep by three frames high. This is also based on experience with the OH over at the nature center. It was originally just five deep frames; three down the front and two behind the bottom frame. It was just not enough space for a stable colony year round. Luckily it was built with a large box and a false back so I had space to modify it easily to a nine frame in a 3×3 pattern. It’s been very stable for a long time now.

Right For Me? There are some general considerations for keeping an OH to think about before building or buying your own. First, don’t expect it to be a production hive for honey unless you build a huge one like the modified Langstroth hives mentioned in the article. Then you have to consider the location and its suitability for the house and its residents. Will their flight path cross a regular walkway? Is the location practical for working them? If it’s a regular indoor OH, will it have to be carried a long distance to work on it? If it’s a WindOH, will it overheat or be too cold? Lastly, while it can be done, it probably shouldn’t be your only hive. The overall size usually takes some degree of population management. However, I have found that a hive of nine deep frames makes a fairly stable home.

So, 3×3 deep frames it was! With help from experienced beeks in an online forum, I chose 47/16 inside width. It respects bee space for three frames. The inside dimensions are 29¼ x 19¼; just about right for hanging the frames on ledges. I was worried they would burr up the open space under each ledge but they have left it completely open so far. The bottom is wide enough for a small landing pad on one side and a feeder on the other. The feeder is exposed but it still worked just fine. Maybe in a colder climate it would need a small band heater and insulation since it is isolated from the hive. The top is wider and deeper to make a roof. If it ever needs repair, I will make a wider, deeper roof that slopes away from the window. The overhang of the office roof stops most rain but a blowing thunderstorm can really soak it. On the back is a hinged door. It’s a ¾ inch oak frame with foam insulation board inside. The faces of the door are thin plywood. There are three latches to keep the door snug even if there’s warping or some propolis buildup. All parts that the bees would contact were taped off and the rest received several coats of polyurethane. 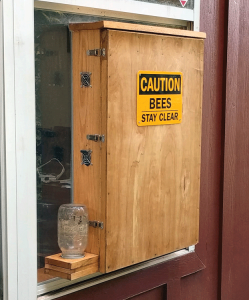 What about Summer? Would it overheat? Again, the office “wall” of glass would remain relatively comfortable for them and the insulation would help on the other wall. In the end I figured it would be best to have lots of ventilation that could be closed off. Two vents on each side have small fan grills screwed over them. Just the grills; no fans. Plastic tabs slide behind the grills. They can be changed out with screened tabs as more ventilation is needed. A large vent of about ⅓ of the floor is screened as well. Duct tape covers it well in winter and can’t be easily seen from inside.

Installing it turned out to be a breeze. I was worried about holding it level and securely against the glass for 24 hours for the silicone to cure. Then I remembered these windows tilt in! I set up a saw horse at the right level and simply rested the window in a horizontal position. I added a lot of silicone to the oak frame and laid it carefully on the glass. The next day, I took the screen off the window and tilted the pane back into the frame. It worked! That is to say, it worked pretty well. I had no idea glass would sag so much over a short span. Maybe it was the added weight of the oak. So, some spots needed to have a second shot of silicone and others needed some trimming but it worked! I left it empty for a couple of weeks so the silicone would be properly cured and it didn’t smell like chemicals. After taking a nuc in my Ulster style observation hive to a lecture (on observation hives of course!), they were installed in their new home. They took to it just fine! Working the WindOH is super-easy, too. It opens right up and is very easy to pull frames out. Treatments are easy, too. No worries about fumes in the building and no hassle carrying it outside.

Between the relative warmth of the office radiating through the glass and the insulation on the door, the colony was able to keep warm enough to overwinter well. We had a pretty mild Winter and this is Georgia so the design might have to be modified up north. I can look in on them any time and have learned so much. Now I just have to figure out how to stop staring at them and get back to work!