A Better Way To Protect Crops, and Bees

Beekeepers may be delivering a new service for crop producers, in North America and overseas, if a Canadian crop protection company is able to launch successfully in a year or two. 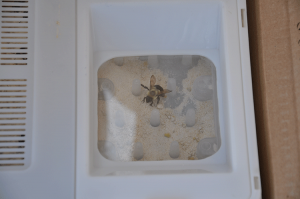 Bee Vectoring Technology (BVT), based in southern Ontario, already has a new production facility at Mississauga for the Vectorpak™ trays and VectoriteTM powder they intend to market.

Vectorite is a patent-pending biocontrol formulation of a unique strain of a naturally – occurring beneficial fungus, Clonostachys rosea. The strain is patented as BVT-CR7.

Bees walk through the Vectorpak tray as they emerge from the hive. They leave loaded with powder on legs and undersides. Visiting flowers, they leave behind the spores of BVT-CR7.

Like a gatekeeper or shield, the fungus stops many economically important fungal diseases from getting a foothold. It blocks development of diseases caused by pathogens such as Fusarium, Botrytis, Rhizoctonia, Sclerotinia and Monilinia.

BVT has applied for product registration in the United States and Canada. Vectorite may be commercially available for 2018.

BVT is using bumble bees for the outset. It plans to modify the trays for use by honey bees in the next phase of production. Replicated field trials are in progress.

Strawberry trials, organic and conventional, began in Florida Winter strawberries this past Winter. The target is prevention of Botrytis grey mold, a common issue for strawberry growers.

Sunflower trials, for controlling sclerotinia head rot, are underway in North Dakota, Minnesota and southwest Ontario for a second year.

“We (BVT) have a microbial product that is actually a beneficial fungus, and a dispenser system that uses bees to deliver the product,” says Ashish Malik, BVT’s president and chief executive officer.

“When bees leave their hive, they pick up this powder that contains the beneficial fungus. When they forage for pollen or nectar, they take the product and leave it on the flower.”

Beekeepers replace the depleted trays every three to nine days throughout the flowering season so that each new flower is protected before it can be infected by a pathogen.

Prior to the field trials, Vectorite was proven to be a safe product in bumble bee feeding studies. BVT supplied the studies as part of the required EPA regulatory submission.

Malik said, “Our initial focus is to launch a system that works with commercially reared bumble bees. We will be doing additional work to confirm the safety for the honey bee brood.”

Five patent families are being launched, worldwide. Registration and licensing applications are underway with the Environmental Protection Agency (EPA) in the United States and with Canada’s Pesticide Management Regulatory Agency (PMRA).

“We have focused on approval from the EPA first as a conventional, mainstream product,” Malik says. “After that, we will look for organic certifications and will start scaling up for global distribution.”

Malik and others on the BVT executive come from long careers in the agricultural chemistry industry.

“I came from 14 years on the agri-chemical side and have worked for two of the biggest global multinationals,” Malik says. “I really believe in this bio-technology, and that it has the next level of impact in terms of sustainability for farming.”

Previously, Malik was the VP of Global Marketing for Biologics at Bayer CropScience. He managed the biological assets and developed strategies for integrating biologicals with traditional chemical products, seeds, traits, seed treatments and services.

Before that, he was Senior VP of Global Marketing for AgraQuest, a biological product company, which Bayer acquired in 2012. He had earlier roles with Syngenta, Imerys and BF Goodrich. Malik serves on the board of the Biopesticides Industry Alliance, holds an MBA from Carnegie Mellon University and a degree in engineering from Swarthmore College.

John C. Sutton, a plant pathologist formerly at the University of Guelph, is the discoverer of the beneficial effects of C. rosea. He has specialized in the epidemiology and management of crop diseases.

Around 1985, Sutton started looking for a biological agent to effectively control economically important plant diseases. He began with strawberries and grey mold.

“Disease organisms, or pathogens, were developing resistance to a lot of the fungicides,” Sutton said in a recent interview. “There was increasing public concern about pesticides, and about fungicides getting into foodstuffs and animal feeds. The question was, could we find and use something more natural – such as a biological control agent.”

Sutton’s team searched for the fungi or bacteria that naturally associate with strawberry plants. They gathered strawberry plant specimens from home gardens, commercial crops, and natural areas, anywhere strawberries were growing in Ontario. At the end of that stage, they had more than 1,400 isolates of bacteria or fungi from strawberries.

“We screened them all. Initially we put them on tiny pieces of leaf tissue, petals and sepals in controlled conditions, at a particular concentration, and challenged them with the grey mold pathogen, Botrytis cinerea,” Sutton said.

One kind of fungus consistently gave a complete, or almost complete, control of the botrytis fungus when applied at the flowering stage. It was then called Gliocladium roseum, and now is known as Clonostachys rosea.

“There turned out to be 12 or 15 isolates of this in our collection,” Sutton said.

Applications during the flowering season were particularly effective. Many pathogens use the flowers as an entry point for fruit infection. Clonostachys is able to block that point of entry. 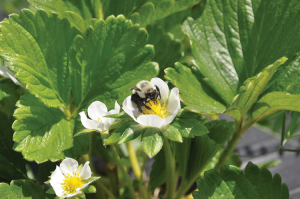 The team began using honey bees to deliver, or vector, the friendly fungus directly into flowers. In 1992, Sutton and colleagues were the first to publish this technique. Later, they also used bumble bees.

Their story was published in 1997 in the professional, peer-reviewed journal, Plant Disease.

By then, Sutton had proof that the C. rosea was effective against botrytis in plants as diverse as strawberry, geranium, tomato and black spruce.

He also was learning that it could act as a shield against Fusarium, Monilinia, Pythium, Sclerotinia and other pathogens.

“It establishes as an endophyte in every kind of crop plant we’ve looked at – and that must be at least a hundred!” Sutton said.

“For example it establishes beneficially inside flowers, stems and roots of grasses, tomatoes, peppers, corn, blueberries, almonds, canola, wheat, sunflowers and many greenhouse flowers. To my knowledge, no other fungus on the planet can associate with such a diverse taxonomic group of plants.”

In about 2010, Sutton along with colleagues Peter Kevan and Todd Mason, began moving forward toward commercialization, using bee vectoring (delivery) for biological agents.

It took years to formulate and test the Vectorite powder. It had to meet several requirements:

Today, talking about Vectorite, Malik and Sutton avoid calling it a fungicide or biofungicide.

“Those terms have erroneous connotation,” Sutton said. “For the most part, Clonostachys doesn’t kill organisms.”

Inside plant tissue, the fungus grows as extremely tiny colonies that interact beneficially with the plant. There is no visual evidence that it is present.

However, Clonostachys quickly reacts when a pathogen such as Botrytis attempts to attack.

“At that stage, Clonostachys rapidly grows and occupies the tissues immediately around the (invading) pathogen like a shield. As well, it also induces the plant’s natural resistance mechanisms to numerous pathogens,” Sutton said.

A North Dakota State University research station at Langdon did replicated sunflower trials in 2016. The Vectorite was carried by bumble bees.

Plant pathologist Venkata Chapara said the NDSU trial plots were sprayed with disease spores, and had a wet flowering season.

The yield difference was nine percent.

Chapara says, “We had 1,880 pounds per acre on the control plots and the BVT plots had 2,053 pounds per acre. That’s a difference of 173 pounds, or a nine percent increase.”

NDSU is continuing the trial in 2017 and expanding it to a second location.

Swanson put out about 60 hives of bumble bees with Vectorite on eight fields, across a distance of about 35 miles, in 2016.

“We started out extremely dry. It stayed dry until July, then it was extremely wet until harvest. We had 43 inches of rain on several of our fields,” Swanson says. “The night after we first set up the hives, we had a 6-inch rain.”

Swanson eventually got his sunflowers harvested. It wasn’t a good trial, from his perspective.

“We didn’t have any yield differences that we could identify. We had almost zero sclerotinia in all locations,” he says. “Almost all our rains came at night, and every day, we had some sunshine. That’s why we didn’t have the sclerotinia, in my opinion.”

When it comes to cures for sunflower diseases, Swanson calls himself a skeptic.

“I’ve tried many things that don’t work, but yes I will try again in 2017 with both honey bees and bumble bees,” he says.

“Either way, in my opinion, Vectorite needs to have a return of $3 or $4 for every dollar invested because you don’t have the disease every year. If it does that, and if we have data that Vectorite works effectively, I think this will take off.” 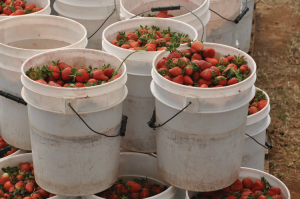 A few fields of strawberry plants, organic and conventional, were treated with the BVT Vectorite powder in Florida’s winter growing season that began in late 2016.

Grey mold or botrytis is one of the most costly fungal pathogens for the industry that supplies most of the strawberries for North America from November through March.

Greg Faust, a contractor working closely with BVT to bring the new product to market, is coordinating the trials.

Faust is a co-founder of Cirrus Partners an Ag Consulting Group. He has worked in sales, marketing and product management with fungicides and insecticides for about 35 years.

“We are into advanced trials this year in Florida. Our objective is to position Vectorite as a foundation system for the season. We put out the bees and Vectorite powder at the start of the season, then maintain that system for the entire season,” Faust says.

He adds, “The bees continuously deliver the biological agent providing continuous protection against botrytis. Technically, the strawberries don’t need the pollination because they are wind-pollinated, but the BVT product is bringing disease control and a pretty strong vigor effect to the plant and to the field.”

He adds, biological systems have a lot of variables.

They are different, Faust says, than formulated chemicals delivered in bottles and bags with long shelf life and low sensitivity to temperature.

“It takes a lot of work. Are the bees out when it’s windy or when it’s cold? What if it’s too hot? What about the effects of a three-day rain? These factors have to be thought through and tested before we bring this to market. Part of the effort is to really work with the growers to design effective protocols that integrate the BVT system into the growers overall agronomic systems,” he says.

The BVT disease control solution won’t be on the shelf at Ag retailers this year (2017), but it is well along the way in the development process.

Faust says, “We are expecting registration in the first half of 2018 by the EPA as a bio-fungicide.”

For organic growers, Malik adds, it will be a bit longer.

“Hopefully, by the end of 2018, we will be OMRI-certified for use by organic growers. The implications, for the organic industry, will be dramatic.”

As for pricing, it will be settled closer to release.

“We are in the process of quantifying the value proposition in terms of better disease control and greater marketable yield, and will set the price once that is better understood. You can be assured that the cost to a grower, or a beekeeper, will be competitive with other conventional practices.”

John Dietz writes is a professional Ag reporter and author.

Jack Blackford Walking out to what was about to become a new apiary, I spotted a mixed bunch of folks listening to one of…