This article will conclude the series on foraging book reviews. “Midwest Foraging-115 Wild and Flavorful Edibles from Burdock to Wild Peach” by Lisa M. Rose (ISBN 978-1-60469-531-1, 318 pgs.) was published by Timber Press.

The title covers the Dakotas, Nebraska, Kansas, Minnesota, Iowa, Missouri, Wisconsin, Illinois, Indiana, Michigan, and Ohio as well as parts of Canada. This particular volume profiles an especially large number of pollinator species – more than 80.  For that reason, I highly recommend it to beekeepers.

The in-depth guide to the basics on foraging stresses sustainability and safety. In addition, it also covers food preservation methods and the importance of proper plant ID. The very helpful, reader friendly, illustrated guide to leaf shapes will be a valuable aid in identifying plants.

The author also covers the types of habitats and areas where it might be unsafe to forage. The seasonal foraging guide lists the edible species that can be found in each of the various habitats. There are even a few edibles that can be collected during the Winter.

The plants are arranged alphabetically by common name. The individual, comprehensive plant profiles include the common and Latin names, the edlble plant part/parts, a plant description, when and where to harvest, and how to prepare and preserve it. In some cases, the author discusses sustainability issues. When appropriate, she also promotes the cultivation of certain species.

The author strongly discourages readers from harvesting vulnerable species, such as ramps – a type of wild edible onion relative. On the other hand, she urges foragers to collect the edible ones that are invasive.

As one might expect, some of the same plants are found in more than one volume in this series. This one features a number of pollinator plants that I’ve mentioned in earlier reviews.

The majority of the pollinator plants in this volume have been either profiled or at least mentioned in earlier articles for Bee Culture. Concerning the remaining pollinator species, I can also recommend the following as good bee plants.

Some pollinator plant species that can result in surplus honey include ground nut and wild lettuce. Both jewelweed and wild sarsaparilla can bring good crops of honey in addition to pollen. Some woody plants that offer nectar and pollen are sassafras, spicebush, and pawpaw.

The wild carrot or Queen Anne’s lace is considered a good bee plant in some areas. A source of nectar and pollen, this species can sometimes bring a small harvest of honey. I hope to include more information about this naturalized species in a future article.

Additional species that bring nectar are Solomon’s seal and the invasive garlic mustard. Pollen comes from the beeches and birches.

The flowers of white lettuce, a native species, are known to attract honey bees. However, sources disagree as to whether it produces nectar or pollen.

One additional pollinator plant recommended by the author is the everlasting or perennial sweet pea (Lathyrus latifolius). This species is a good nectar plant that can sometimes yield honey.

On the other hand, I do urge readers to be very careful to avoid confusing this sweet pea with a relative that can be toxic. My concern is that foragers might mistakenly collect the dried pods of a related species, the chickling pea (Lathyrus sativus). Also known as grass pea, it can be toxic when large quantities are consumed.

This poisonous species causes lathyrism, which results in a sudden, incurable paralysis. During times of famine, the plant has caused epidemics of lathyrism in various areas around the world.

The potentially harmful species has been introduced to the U.S. It has naturalized in a number of states, including California, Oregon, Wisconsin, Maryland, and Massachusetts.

In addition to those pollinator plants, here are detailed profiles of two additional species. These are motherwort – an herb – and the common garden asparagus. Both of these were introduced from Europe and naturalized in the U.S. 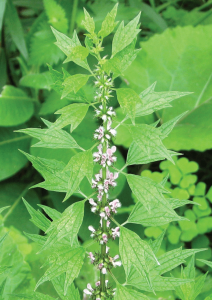 Native to much of Europe, this perennial herb is now found in all of the lower 48 states with the exceptions of Florida and California. The plant frequents waste places, pastures, disturbed sites, open fields, old farmyards, abandoned factory grounds, roadsides, and trails. Motherwort can be a weed in gardens and landscapes and around homes.

This species was used medicinally by the ancient Greeks. In Japan, it is celebrated during the Motherwort Flowers Festival.

The plant was recommended by herbalist Nicholas Culpeper as well as by John Gerard in “The Herball,” published in 1633. The 16th century German herbalist Leonhart Fuchs also wrote about this species.

Motherwort was introduced to America during the Colonial Era and appears in garden books from this period. Some sources report that Johnny Appleseed also carried seeds of some herbs, including motherwort, as he traveled the country planting apple seeds.  A member of the mint family, motherwort can sometimes cause dermatitis in susceptible individuals.

The genus name is from the Greek and means lion’s tail. The aromatic, drought tolerant, perennial herb is generally two to six feet in height with a spread of two to three feet.

The square stem is typical of the mint family. Especially suited to poor soils, this erect, upright plant features prickly, opposite, somewhat drooping, lance-like leaves that appear on long petioles. These can contain three to five deep lobes.

Four inches across, the green leaves are whitish and hairy underneath. The upper foliage contains three, hairy lobes that can be toothed. The lower leaves are generally palmately lobed.

Motherwort can begin flowering as early as May. Blooming can extend into November, depending on the climate. The axillary, hairy, tubular, sage-like, two-lipped blooms resemble those of other species in the mint family. These appear on crowded, leafy flower spikes, which contain small, numerous whorls with six to twelve blooms.

The blossoms vary in color from white or pastel pink to pale purple or pinkish-purple. They have a five-veined, bell-like calyx with five, pointed, spiny lobes and a tubular, very hairy corolla that is purple and yellow.

I’m somewhat reluctant to recommend that beekeepers grow this particular species because it naturalizes so easily and can become quite weedy. In fact, motherwort is often considered to be a weed by many gardeners. Nonetheless, the plant still doesn’t appear to be as aggressive as most invasive species.

This adaptable, reliable herb self sows very readily. The fact that it produces a lot of seeds serves to aid its spread. In the event that any beekeepers choose to cultivate this plant, I would highly recommend that they remove the flower stalks once the blooms have dried. This will help to prevent the plants from setting seeds.

Motherwort is a valuable bee plant with the flowers being a favorite of bees. It is an excellent source of nectar and an almost equally good pollen source.

In some regions, this herb is a good honey plant largely due to its long blooming season, which can sometimes be two to four months or so. This yields 0.12 mg nectar per flower daily. Even during drought, motherwort serves as a reliable source of honey.

This can provide a honey surplus of a hundred pounds or more per hive, in some locations.  Motherwort honey has a light, mild flavor with a straw color. 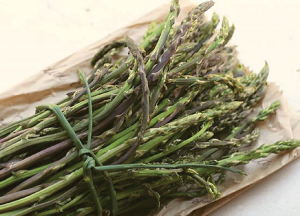 Native to coastal areas of Europe and Asia, asparagus has naturalized in the U.S. It occurs in all mainland states. The plant inhabits hedgerows, thickets, waste places, open trails, and old fields. This crop is grown commercially in Washington, Michigan, New Jersey, Massachusetts, and California.

Asparagus has served as a food since ancient times. While the ancient Greeks preferred asparagus spears harvested from the wild plants, the Romans grew this as a vegetable. The plant was brought to North America by European colonists.

Asparagus belongs to the lily family. The smooth, much branched stems arise from a woody crown. Three to five feet tall, the plant is somewhat long lived—a decade or more. The small, fern-like leaves are thin.

Asparagus can bloom over a long period from March to August or so, according to the location. An individual stalk typically bears flowers for about three weeks. The blossoms release a distinctive odor.

An individual asparagus plant will bear either male or female blossoms. Both types of blooms have nectaries at the base of the corollas. The male flowers are larger and more conspicuous with an inner and outer whorl that contains three stamens.

Borne by female plants, the small, hooked, round berries are 3/8 inch across. Fruits can contain up to six seeds.

Full sun and a well drained soil are needed for this crop. A light, porous soil is best. Silt and light sandy loams are also good.

Heavy soils are generally less suitable, although certain asparagus varieties are more tolerant of such conditions. A pH range of 6.0 to 7.7 or so is acceptable.

Propagated by seeds and crowns, asparagus can be planted in the Fall or Spring, depending on the climate. Recommended for zones three through eight, this crop requires a dormancy period, which can be induced by cold temperatures or drought.

A number of asparagus varieties are available. Sprouting in one to two weeks, the seeds can be direct sown or started them early indoors. Avoid covering them.

Plant asparagus crowns in the Spring as soon as the ground can be worked or in the Fall. Prior to planting crowns, till the soil to a depth of six to eight inches. Amend the soil with rotted manure, compost, and fertilizer.

Space asparagus plants two to three feet apart within rows that are four feet apart. Plant the crowns around six to eight inches deep with the roots spread out and the buds on the top. Initially, cover them with several inches of soil.

Once the first shoots begin to appear, cover crowns with several additional inches of soil. Repeat this procedure several times until the soil surface of the bed is level and the crowns are six to eight inches deep.

For best results, keep the asparagus bed free of weeds. Water as needed to keep the soil moist until this becomes well established. Apply fertilizer annually during the Spring.

Potential problems of asparagus include asparagus beetles and slugs along with fusarium wilt. Rust can occur although there are resistant varieties.

When asparagus crowns are planted, gardeners can expect a light harvest during the second and third years after planting. If grown from seeds, an additional year is required. The harvest season lasts for three weeks or so.

Bees find asparagus blossoms to be very attractive. These bear lots of nectar and pollen. The orange, oblong to round pollen grains are fairly small.

Bees work the flowers throughout the daylight hours until dark. The blooms are particularly rich in nectar.  When conditions are favorable, the nectar flow can be especially heavy and result in a large crop of honey.

The plant is an important, reliable honey source in some areas. The rather thin bodied honey is slow to granulate. With a mild flavor, this can vary somewhat in color.

Generally, it ranges from very light amber or light amber to dark amber. In some cases, asparagus honey can have a greenish tinge.

So far as the quality of the honey is concerned, It can vary somewhat. This mostly ranges from fair quality to somewhat lower quality.

For a good crop of asparagus seeds, cross-pollination is required. Commercial production of asparagus seed relies primarily on honey bees for pollination. One to two colonies per acre is recommended for asparagus seed fields. There should be one male plant for every six females with the males being within five feet of the females.