Sammy Ramsey has found out what the Varroa mites are having for their meals as they ride around on the bodies of our honey bees. His research results have changed the approaches to solving the huge problem Varroa has caused not only in the United States but also in many other countries.

Sammy’s life began in Washington, DC, but soon his family moved to Maryland where he lives today. The joy of singing began very early in his life, before he was even talking. His favorite toy was a microphone attached to a toy tape recorder. So singing, into a microphone or not, has always been an important part of his life. He does not limit his music to any particular genre or style. He just loves music and singing.

Like many small children he was terrified of insects. Fortunately that attitude dramatically changed so that by the time he was seven years old he knew he would become an entomologist. For his undergraduate studies he attended Cornell University. During those years he focused on predatory and parasitic insect interactions that gave him an excellent background for his graduate investigations. 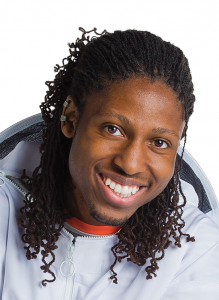 After Cornell he began research work for his PhD at the University of Maryland where he received his doctorate this year. His undergraduate studies fit perfectly with honey bees and Varroa. However, Sammy had noticed some problems with the Varroa and honey bee relationship, partially having to do with the white feces Varroa left in honey bee larval cells. Many beekeepers have noticed this distinctive poop as a sign that Varroa had infested bee larvae in those cells.

Now to take a step backwards in time, to 1995. Varroa was in the U.S. and causing problems. Dr. Allen Cohen did identify the white material, Varroa poop, left on cell walls as a purine, a chemical compound called guanine. He even thought that substance was strange if Varroa was feeding on the bees’ blood, or hemolymph. For some reason that initial discovery was never followed by more research.

Let’s step forward quite a few years to an interesting but not pleasant situation. Unfortunately Sammy’s Dad acquired gout. Those people with gout have to avoid certain foods or they end up with a lot of joint pain. Fatty foods such as some meats, especially organ meats like liver, are on the list of foods to avoid. When digested, these foods will leave more purines circulating in the body which then build up in the joints. Sammy connected those fatty foods to avoid with the excretion of guanine by Varroa. He hypothesized that since the mites were excreting the chemical components that make up fatty organ meats that they must be eating a lot of some sort of organ meat just like people who deal with gout. 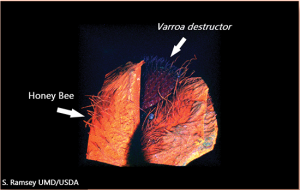 Sammy first looked at the digestive systems and the excrement of hemolymph-feeding parasites and found that those parasites, when compared with Varroa, were definitely different. While beekeepers do see Varroa perched on the tops of thorax or abdomen of honey bees, Sammy found that Varroa feed on the underside, or the ventral part, of the bees. Furthermore the Varroa had wedged themselves under the segments that make up the body covering of the bee potentially giving them access to a specific fatty organ in that area called the fat body. He then marked this organ with a biostain that only glows when attached to fatty tissue and marked the hemolymph with a different glowing marker. After this he exposed the marked bees to the mites.  Sammy’s “eureka moment” occurred – Varroa don’t feed on hemolymph—they feed on fat body. (Many books will now have to be rewritten to reflect his discovery.)

Beekeepers do know that the “fat body,” present in both the larva and adult bee, is essential to the bees’ lives, especially for winter bees. This fat body provides the nourishment for the Winter bees to live and is essential for enabling the Winter bees to feed the developing bee larvae when the queen begins egg laying during Winter months. Inside the adult bee the fat body is mostly found on the bottom (ventral) side of the abdomen.

To verify his initial thought, Sammy conducted several more tests. He froze bees with mites on them in place and cut straight through them both. Under a fancy electron microscope, he was able to show that the mites were destroying honey bee fat body tissue wherever they fed. Then he raised mites off of bees feeding them different diets of honey bee tissue, some with fat body, some with hemolymph and some with a combination of the two. Mites fed on hemolymph had the same results as those fed nothing – both died quickly. Those fed both fat body and hemolymph lived longer than those fed just hemolymph but the ones that lived the longest and laid the most eggs were the mites just given fat body.

After receiving his doctorate Sammy was employed at the USDA Bee Research Laboratory in Beltsville, Maryland. This lab, one of four Agricultural Research Service labs doing bee research, concentrates on bee health, such as diseases and parasites. His current project, based on his university research, is to figure out a practical way to kill the mites.

However, another Asian mite needs to be considered. It is called Tropilaelaps and it feeds on honey bee brood. So far it is found primarily in Asia (though this mite has moved to the Middle East as well). As we all know, small critters can easily make their way around the world on ships and escape detection until they become established. Sammy has already made one trip to Thailand and has met the mite (and don’t worry, he left it there along with all of his equipment just to be sure). He is expecting to spend nine months in 2019 in Chiang Mai, Thailand, to study this mite’s biology and behavior – and how this mite feeds. The results of his investigations there will be interesting.

Sammy also loves teaching. Although he is not at a university he is in great demand as a speaker. His presentations give him an opportunity to reach out to those interested in his favorite insect, the honey bee. Another aspect of his teaching is giving presentations on “How to Give Engaging Scientific Presentations.” Everyone who has heard him speak at meetings will agree that his presentations certainly qualify him for teaching that topic! Although he does not have any beehives at his home, he calls his research hives his “bae-bees.” They are very fortunate – he sings to them!

Today he is still singing – to his bees, in his church, to his students, at events and if you attend beekeeper meetings where he is a speaker you may be fortunate to hear him sing there as well.

Bee Culture recently did a podcast with Sam and it is posted at www.beekeepingtodaypodcast.com. It contains even more information on this and other subjects Sam is involved in, including a gofundme campaign to help support his upcoming trip to Asia to do new research on the Tropilaelaps mite in Asia. This is truly the beekeeping community supporting beekeeping researchers. GoFundMe site for Dr. Ramsey https://www.gofundme.com/fundhoneybeeresearch.