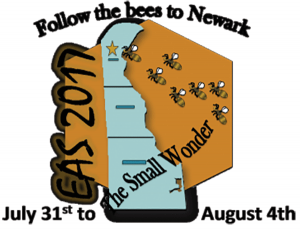 To help coordinate and make these experiences safe and educational, bee wranglers have supervised the EAS colonies. For the past 15+ years, Bill Troup and Don Hopkins have volunteered as EAS wranglers.

The 2017 EAS annual conference, this year July 31-August 4 starts with a Short Course. Bee colony inspections and live bee instruction once again will be a prominent feature of the Short Course and Conference.

The UD apiary normally consists of up to 30 colonies and includes a small building that holds smokers and bee items plus empty supers. There is additional storage and an extracting facility in a nearby barn. Each year, the spring beekeeping class establishes package bees, captures a swarm (conveniently hung the night before class in a low hanging black cherry), make divides as part of swarm control and prepares colonies for Summer pollination. 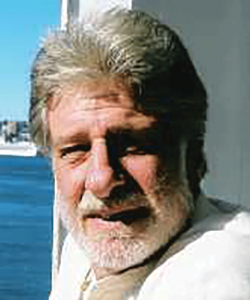 At the annual Short Course and Conference, EAS has designated Bee Wranglers to ensure colonies are ready for instructors. Wranglers gather bee equipment and help workshop presenters “read” the colonies. This year we honor past Bee Wrangler Bill Troup. Bill passed away in June of 2016, one day short of his 70th birthday.

Bill Troup took vacation each Summer from his State position with Weights & Measurements and, with retirement, from his part-time MD Apiary Inspector position, to attend EAS and wrangle the bees. Bill, along with wife Nancy, was owner/operator of HoneyField Apiaries of western Maryland. Both he and Nancy were EAS Master beekeepers and extremely active in training beekeepers in western MD.

Bill started bees in 1979 when a friend asked if he would like to help him move 12 colonies inherited from a family member. Bill continued his interest after his friend decided to quit bees. He moved a colony to the home site so he and Nancy could both work bees. And beekeepers know the rest of the story – that one colony grew and grew and grew until 150 + at one point. Fortunately, their two sons Bill and Dan also became involved with the bees.

In 1999, Bill retired to become part-time regional apiary Inspector with MD Dept Ag. Bill became associated with a MD program to train dogs and he handled several AFB sniffing dogs over the years. In their beekeeping, Bill and Nancy produced and sold nucs from their colonies each Spring. They began queen rearing and sought  to sell nucs with their own queen selected stock. They also sold Brushy Mountain bee equipment and used colonies to pollinate apples and pumpkins. Bill mastered production of honey in the comb and at one time almost exclusively produced this product. They sold their extracted honey to health outlets/resorts; most of the sales were in gallon or 50# buckets. 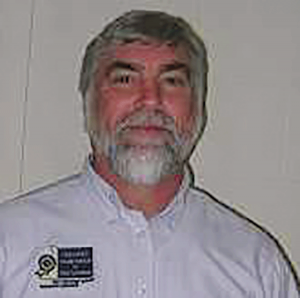 A second Honorary Bee Wrangler this year will be Bob Mitchell. Bob retired in 2016 after 30 years as DE Apiary Inspector. Prior to becoming Inspector, Bob started with bees to assist his dad on the family farm in Lewes DE (alongside coastal DE). The farm produced vegetables so when Bob learned bees belonging to a recently deceased beekeeper were for sale he took them over. He split those colonies which allowed for expansion of their fresh vegetable production. Honey was sold at the farm market, alongside other farm produce.

One year Bob got a call from a watermelon grower asking if he knew where he could rent colonies for pollination. Bob used his own colonies to provide the pollination service and increased colony numbers to try to fill the demand. At one time he had 150 colonies and currently continues to rent watermelon pollination bees. He is thinking of relocating to the mid-west, the family farm is currently being sold and plans to continue with bees in retirement. Bob will be judging the EAS honey show, in addition to bee wrangling.

Bob experienced his first Africanized bees in Panama with the award-winning DE-PNA beekeeping project. He said he found bees after watermelon pollination to sometimes be nearly as aggressive as Panama’s Africanized bees.

Our practiced bee wranglers at EAS 2017 will be Don Hopkins North Carolina State apiarist and Jennifer Keller, apiary lab technician at North Carolina  State University. Both have been our EAS Bee Wranglers since the 2007 EAS in Delaware.

Don as state apiarist of North Carolina supervises a staff of five full-time bee inspectors and a lab technician and personally inspects over 2000 colonies himself each year. He, like Bill and Bob, brings lots of teaching and beekeeper experience to the EAS attendees.

Don began keeping bees at age 10 in New Jersey. He credits long-time NJ bee inspector Jack Matthenius (a former EAS Board Chairman) for his early beekeeping education. When he moved from NJ to NC as an apiary inspector, he was not able to take his bees southward – this was during the time of tracheal mites and such movement was not permitted. Since NC does not permit it, he continues only with a few hobbyist colonies at present.

Inspection of NC beekeeping bees gives him plenty enough in-hive experiences to last each week. One of his favorite demonstrations is of sugar shake for mite monitoring and discussing AFB. Don was offering a workshop in Bolivia and gathering material for the activity when he detected the AFB odor in the hive he was checking. It turned out to be the initial AFB discovery in the county. Don also found a colony moved to the EAS meeting site with AFB one year.

Don takes his vacations most years to go overseas with bee development projects. He and I went to Haiti (one of four or five visits) and we have had shared projects in Bolivia; Don has visited over 10 different times. Don has also visited and conducted disease workshops in Kazakhstan.  He has been an officer and long-time member of AIA. 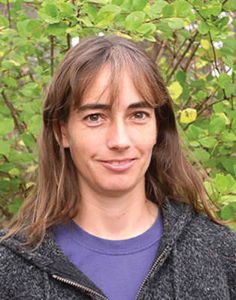 Our second NC Bee wrangler, Jennifer Keller has been an EAS Bee Wrangler the past nine years. When not in the EAS Apiary, she can be found in one of several North Carolina State University apiaries in and about Raleigh NC. She became interested in beekeeping while serving as a Peace Corps volunteer in Paraguay when her forestry project was not progressing. She learned beekeeping with Africanized honey bees and then spent her time helping members of her rural community in the south of the country.

Apiary technician responsibilities include setting up and maintaining the 100-200 colonies in on and off campus apiaries. She helps coordinate various graduate and research projects of Dr Dave Tarpy. The bees have to be ready for students and for a beekeeping and graduate level course. She is particularly adept at assisting graduate students and post docs with their necessary bee work and with their projects. Queen rearing and artificial insemination are a regular part of Summer research.

Jennifer also gives presentations and teaches beekeeping classes at several of the NC county bee associations and well as the state association meetings. She (with Don) has a major function at the honey show at the NC State Fair each Fall.

In addition to their skills in disease diagnosis and Varroa mites, all three wranglers bring a practical, down-to-earth approach to bee colony management. All are masters at hive inspection. It is a pleasure to merely watch them manipulate a colony as they “read” the bees so effortlessly. All three are real beekeeping artists.

EAS Bee Wranglers are a great resource to assist EAS Short Course and Conference attendees learn how and why to inspect bee colonies. The extensive bee sessions during the short course and our “walk in the apiary” arranged for every workshop period, utilizes different experts, assisted by the EAS Bee Wrangler, to help make each bee colony visit an invaluable training experience. EAS is fortunate to have such skilled and highly effective bee wranglers. Come visit them – we invite you to come and experience colony inspection with the best. EAS will be held July 31 – August 4 at University of DE.