Dogs are an interesting group of animals. With appropriate rewards they can be trained to do many things. Some breeds inherently do things. The retriever wants to carry something (mine felt it his job to carry the mail up the long farm drive). A beagle will intently follow the trail of a rabbit, for miles, and then forget how to get home. The Border collie is dedicated to herding, normally sheep, but lacking those will herd children, horses, chickens, cows. However, a large group of dogs prefer to snooze in the sun, soaking up the warm rays.

Well, dogs, in general do not get along with bees. However I thought about their attributes when the East Cupcake Beekeepers Association was getting ready to hold the annual elections. The President had served two terms and was required to step down. Now a new President needs to be nominated and elected. Frequently a Vice-president was elected to that position in order to step into the Presidency. Sometimes they do and sometimes they don’t. Usually there is no term limit on Secretary and Treasurer. So those two officers, once elected, can continue for years and years. Actually in some small clubs, not being regulated by Bylaws, the President and Vice-president can continue for years and years also.

In many clubs, especially today, new beekeepers arrive from classes given and the club grows. Yes, some members move away, some lose interest in beekeeping and drop out and some decide a particular club no longer offers very much. The new beekeepers are eager to continue learning but seem to feel they do not know enough to contribute to the organization. Some of these newbees could be the club’s leaders in a few years.

Let’s have a look at the various activities of a club, small or large, and how these activities actually get done. Over the year a bee association will have meetings, some with speakers, others with movies, a Q&A session, a field day with open hives, a queen rearing activity, a holiday potluck, a picnic, a field trip, participation in a local event, a honey and hive products show, a bee craft demo, a joint meeting with a neighboring club, and anything else I have not thought of. Some of those topics are wishful thinking in a number of clubs. Everyone hopes for variety but nobody steps forward to make the wishes come true. 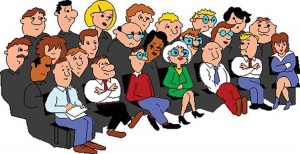 Perhaps it would be better to say who gets things done. So often an organization stagnates because too many members ‘snooze in the sun.’ These members come to almost every meeting, help put a few chairs away at the end and disappear. When asked today to do something, to be an officer, everyone is ‘busy.’ That can mean with work, caring for children, gardening, appointments, family responsibilities, other organization meetings, teaching, hobbies, television, volunteering, and anything else I have not thought of.
Ordinarily members of a bee club consider the main officers to be the ones who generate and organize the activities – the ones who ‘get things done.’ However, one small committee, usually active only once a year, may actually be the real key to the success of a bee association. I’ll bet you never thought of it that way.
Whether a bee club is large or small, the Nominating Committee, frequently three people, has an important task – searching the roster of members for ones to ask to run for an office. Actually, finding three people for the Nominating Committee is the first hurdle. The first excuse heard is ‘I don’t know anybody.’ However that person seems to be busy talking to other members before and after the meeting, and during refreshments. Yes, everyone is talking about bees. Any clues about a possible committee member or potential officer could be found in those conversations. In a way, the Nominating Committee is the very important part of the future of the club. The actual time spent during the year by the Nominating Committee is quite small. But the members chosen to be on the election slate will be the guiding ones for the next year or two. If you are not happy with the direction the club is going, then perhaps you need to say ‘yes’ to being on the Nominating Committee.

Most clubs have the basic four officers. However some associations may have two Vice-Presidents, giving an odd number of five, better for voting. Some clubs may have two Secretaries – a Recording Secretary to take the minutes, and a Corresponding Secretary to take care of communications. For a large number of members a Membership Coordinator could help the Treasurer keep track of the roster, address changes, delinquent dues. So an Executive Board could actually have as many as seven people. Seven! Where, how is a club going to find all these volunteers? Even a small club could have five on the Board. Imagine the task of the Nominating Committee! Imagine the task of asking someone to be on the Nominating Committee.

One small suggestion to help the Nominating Committee could be having members wear nametags at meetings. For very small clubs it might not be necessary but in a club with 100 members being able to associate a name with a face could be very helpful.

Are the duties of the officers described in the Bylaws? If so, then it may make it easier to ask a member to run for an office. Does your local club have a newsletter? If so, before the Nominating Committee starts asking members to run for office, put the duties of each office in the newsletter. Then the members will have seen what each officer does. Perhaps it will make the Nominating Committee’s task a bit easier.

Do not forget the newbees. Do you realize that no knowledge of bees or beekeeping is necessary to write a check or make a bank deposit of dues money? No knowledge either to take the minutes of a meeting. So a newbee could certainly be elected Secretary or Treasurer. The Nominating Committee needs to keep that in mind and go ahead and approach the newbees. ‘I don’t know anything about bees yet’ just does not fit with being Secretary or Treasurer.
How about those members who suggest ‘Let’s have a potluck instead of a December meeting with a speaker.’ Great Idea. Now is the member who made the suggestion willing to be the coordinator? That’s also the problem with other Great Ideas, such as an open-hive field day, a summer picnic, a joint meeting with a neighboring club, and other such activities. It is easy to suggest something that would be of interest and assume that someone else would organize it. Ask the person who made the suggestion to be the coordinator. Variety in programs and activities of a club is vital to the continuing success of the club. But all too often nobody steps up to make the activity a reality.

Go ahead and volunteer for the activity you just suggested. Then don’t be afraid to ask other members to work with you. Ask someone to bring plates, eating utensils and Christmas napkins. The club will reimburse the expense. Ask someone to help clean up at the end. Ask someone else to help receive the potlucks. All of these helps are short and simple, but necessary. And it does get a few more members involved. Ask to make a short announcement and thank your helpers.

Perhaps they will continue helping at activities.
Yes, bee clubs, large and small, are staffed by beekeepers who can be considered volunteers—receiving no pay but are compensated for expenses. For some people, being a volunteer is a reward. Satisfaction comes from just doing a good job and realizing that a better bee association benefits everyone. However, all too often the outgoing President welcomes the new officers and the meeting continues. Has anyone thanked the outgoing officers? Has anyone thanked the Nominating Committee? What about the Secretary who has been in that position longer than anyone can remember?
Recognition can be done in many ways and lets the volunteers know that their time and efforts were valued by the club members. Let’s see how a club can say ‘thank you.’

How about a Certificate of Appreciation? This blank certificate can be found at office supply stores. Or you can choose from a vast array of bordered blank certificates and with the magic of a computer create such a certificate for the bee association. Choose different borders for different officers. How about giving an appreciation certificate to the beekeeper who has invited the club for a field day for many years. Yes, someone other than the officers please volunteer to do the certificates! It does not take that much time.

So the Secretary is leaving after eight years of taking minutes. Yes, a certificate of thanks is called for. However, the club can certainly afford a gift – a bouquet of flowers, a pair of beeswax candles made by the club’s beeswax crafter, a box of golf balls, a gift certificate for a queen bee. Think of something appropriate and make it a surprise at the Secretary’s final meeting.
Although refreshments have either been coffee or soft drinks and cookies, consider making the meeting where the outgoing officers welcome the incoming officers a bit more special than just saying a few words. Get a cake! Get two cakes—one saying Thanks! And another saying Welcome! Everyone gets a piece of cake.

You can have hive tools engraved. Shops that sell trophies usually can arrange this. Start a tradition by presenting every outgoing President with one. The message can be simple; just ‘thanks for being President (or other officer) of (name of club).

By the way, when you were at a meeting of your bee club, did you happen to see the retriever, the beagle, the Border collie? I know you’ve met those who prefer to ‘snooze in the sun.’ For the success of your club, don’t be the snoozer!

Ann Harman has been keeping bees and being involved with bee clubs for many years at her home in Flint Hill, Virginia.