This may be the May issue, but here in Medina County, Northeast Ohio it has been a Winter-like week. We’ve had snow, rain, wind and COLD. We came home today to a downed pine tree – one that Kim figures is probably close to 75 years old. We’ve been luckier than some folks around us who have lost power because of the wind and downed wires. It’s been an interesting Spring so far. We had almost no Winter, but now it has arrived.

I think it’s a good thing we decided not to get any babies (chicks or ducks) this Spring. We would have had a hard time keeping them warm. 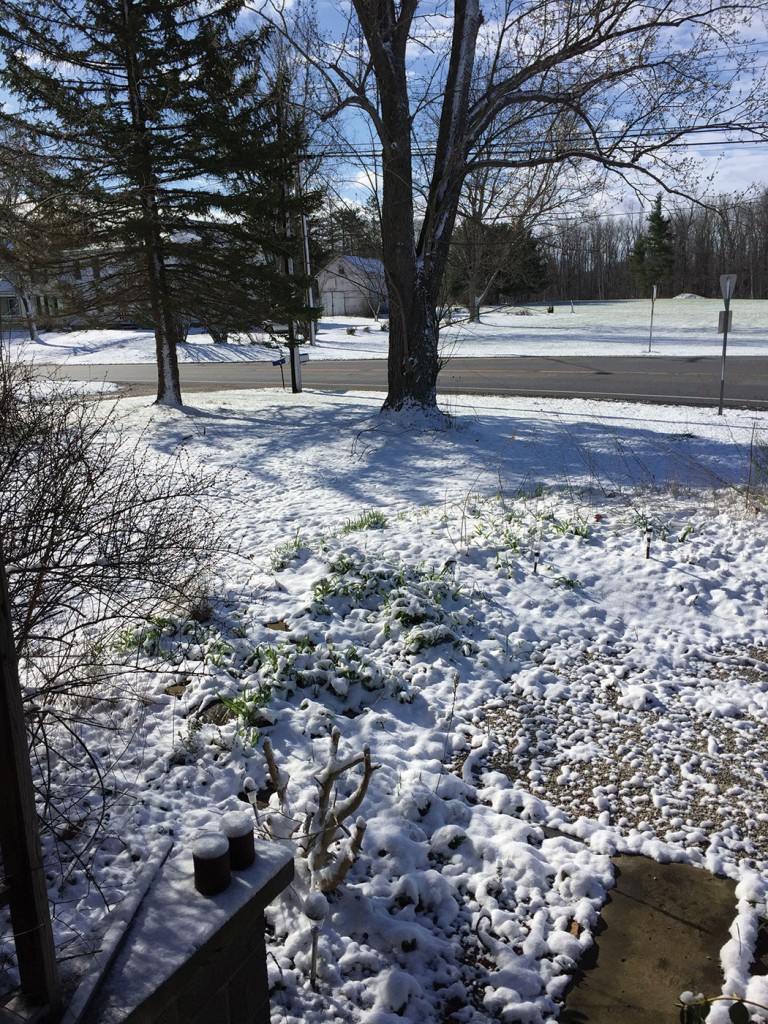 I read a statistic that said 85% of the chicks and baby ducks bought for Easter don’t make it through that first year. How sad! Last Spring we were in the feed store right at the time that the chicks and ducks were on display. And they are so darn cute. A young mom came in with her two kids, I think to by dog food. Well the little boy saw the chicks and he was in love. So after a very short chat with the store employee, the young family left with four or five chicks. I’ve often wondered if those chicks made it. She did not come there to buy chicks – no preparation, no planning, no getting ready had taken place.

It’s not so hard to get a puppy or a kitten on a whim. They’re pretty flexible and you and your family can adjust. But chickens and ducks – there should be some planning and some research. You can only stick them in the bathtub for a little while. Before you know it they are basically adult chickens and they need room to move around, and a roost to sit on at night, and lots of clean water, and they make a big mess. This is why those poor little Easter chicks and ducks don’t make it very long. Please, if you’re going to get chickens, read a book, do some research, build or purchase a coop – have a plan.

Chickens are a lot like bees – maybe that’s why a lot of folks have both – they’re fun and fairly simple to care for, as long as you are prepared. And both give us the nice benefits of fresh eggs and honey.

If you decide to venture into the poultry world be aware that they are extremely vulnerable. As Kim says, everything likes chicken. I think this is our fourth Summer with our birds and we’ve actually been pretty lucky compared to friends that I’ve talked to. But we’ve lost a few chickens to predators over the years.

The first Summer something actually got into the coop and got three chickens – pretty sure it was a raccoon. That was my fault – didn’t get home until late to close the door. The others have gotten out of the pen into the wide open spaces and that’s when they’ve gotten captured, probably by a hawk.

We’ve not been so lucky with those ducks, but we’ll try again next Spring. This Spring was way to busy and too cold. We’re expanding the coop and the penned in area, getting ready for next year. We still have the male – haven’t found a friend or another home for him at this point. I have a couple of leads. He seems content, but how can you really tell how a duck feels?

Our local feed store is selling bee equipment and this Spring is selling package bees. An Ohio package dealer is going to show up with a truckload of packages that people have ordered ahead of time. In talking to the young lady who manages the store she told us she knows nothing, absolutely nothing about bees – this decision was made farther up the ladder than her. She knows we’re beekeepers and asked if we might be of some help to her on the day they arrive. We said yes, but as of today she has not contacted us with any details.

You have to wonder how many of the folks getting packages that day are like the young mom who came in to buy dog food and went home with a bunch of baby chicks. Hopefully they’ve done some research, gone to a class, or at least read a book or talked to a beekeeper.

We had about 75 people in our beginning beekeeping class this Spring. We never have a good way to know how many continue after a couple of years. Taking the class gets you a year’s membership in the Medina County Beekeepers, but after that we seem to lose a bunch. Maybe they’re still keeping bees, just not coming to meetings. No way to really tell. But Kim gives them as much information as he can cram into those five or six evenings.

We also have a half hour every month before our regular meeting just for beginners to come and ask the questions they don’t want to ask in front of the whole crowd. Our bee club also has a working, teaching beeyard where we hold field days as often as the weather and our time allows. Medina does a pretty good job of supporting our new beekeepers. What about your bee club? Is there more you could be doing to help these new people stay committed until they feel comfortable on their own?

As we publish this May issue of Bee Culture, it is mid-April and we have snow in the forecast for tonight and over the weekend. Kim and I are headed to Asheville, NC tomorrow – if we can get out of Cleveland – to the Mother Earth News Fair. Kim and Shane from Brushy Mountain are supposed to do a live bee demo on Saturday. The forecast for Asheville Saturday is 46° and windy. We’ll see how it goes.

I hope your Spring weather is being a little nicer to you and your bees. Good luck this year!