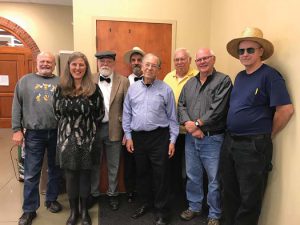 Once again another year has gone zooming by. As I write this it is early November and tomorrow night here in northeast Ohio we have a forecast of snow and 12°F. – a little extreme so early in the season. The wooly bear caterpillars that have been spotted have been mostly black which says cold, hard Winter ahead. So it looks like we better get those birds hunkered down and warm.

We had a great time at Bee Culture’s October Event, celebrating The History of Beekeeping and the 150th Anniversary of the A.I. Root Company. There were about 75 of us and it was loads of fun. 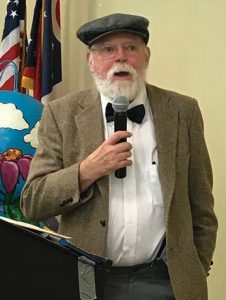 We had A.I. Root (Kim Flottum), L.L. Langstroth (Marc Hoffman) and C.P. Dadant (Jerry Hayes) on board to educate and entertain us. These guys did a great job. In fact, such a good job that there was talk of them going on the road. And Kim has already been asked to do his performance as A.I. at one of the local bee association Christmas dinners. Who knows, Kim may add this to his post retirement activities.

As has become our tradition the weekend started with Friday afternoon tours of the Root Candle factory. If you have had the chance in the past for one of Kim’s tours you know what a treat it is. This is a very cool place to have spent a large chunk of our lives.

All of our speakers have written for Bee Culture over the years. Jim Tew was writing for the magazine before Kim started. You can read about that in his article in this issue. Jim Thompson is a somewhat regular writer for us and actually worked at the Root Company some years ago. So it felt like family with all of them here. 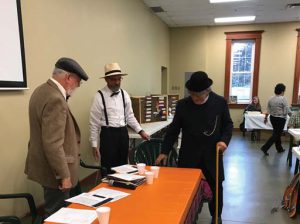 Amos Ives Root, C.P. Dadant and the Reverand L.L. Langstroth settling in for a chat about what’s going on in the bee world.

Brad Root was with us all weekend and opened up our event welcoming everyone to the Root Company. Sunday ended on a bit of an emotional note as Brad officially announced Kim’s retirement as Editor of Bee Culture. Brad also officially welcomed our new Editor, Jerry Hayes to Bee Culture. 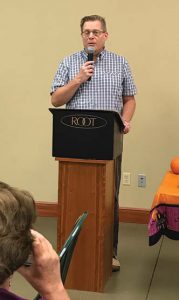 Brad Root welcoming everyone to
our event.

This is a little difficult, no it’s really hard to write about Kim retiring. Actually, I’m very excited for him because he has some very interesting projects that will be taking up his time. But we’ve been doing this together for over 30 years now, so life will be different – not bad, but just very different.

As you know if you’ve been reading this column from the beginning, Kim and I live just about seven miles down the road, so it’s not like he’s going very far. And, if you know me at all, you know I’ve never quite gotten over my fear of driving in snow and on ice. So I’m guessing there will be a lot of mornings when he’ll be bringing me to work. At least that’s my plan.

You’ll still be seeing a lot of Kim, I suspect. He already has several speaking trips lined up for the beginning of next year. And he and Jim Tew will continue the KIM&JIM show webinars. And he’s got big plans to expand the Beekeeping Today Podcasts with Jeff Ott. And I think there are a couple of more books spinning around in his head. And he’s sticking around part time to help me finish up ABC & XYZ. 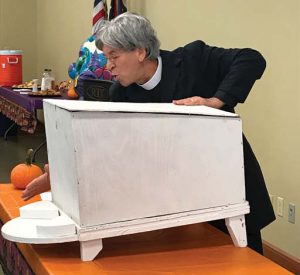 L.L. Langstroth demonstrating to all how his hive works.

So here we go – starting the newest part of this life journey that we are on. Over the years a lot of people have asked how we do this dance that we’ve been doing for so long. They’ll say ‘Oh I couldn’t go to work with my spouse everyday.’ But for Kim and I it has worked beautifully. That’s not to say that we haven’t banged heads a few times along the way. But for the most part it’s been wonderful. I can’t imagine any other way, although I never imagined this way before it just sort of crept up on us.

And now let’s talk about the new guy – Jerry Hayes. We’ve known Jerry for a lot of years – Kim certainly more years than I have. So, he’s been a familiar face for a while and more recently a good friend. He’s been in this industry for as long as we have, so he knows a lot of people and a lot of stuff about beekeeping and beekeepers. And this is a big change for him also. He’s moving to Ohio from St. Louis – selling a house, packing, moving, buying a new house, being the boss. Welcome to Bee Culture, Jerry. We – Kim, Jean, Amanda and myself will do all that we can to make this change easy for you. 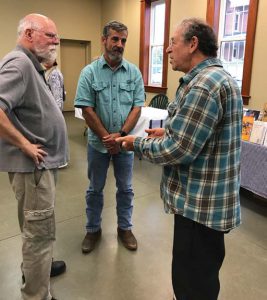 Kim, Jerry and Marc talking over their strategy for the next day’s performance. Great job guys! Thanks.

So that’s the scoop folks! Please wish us luck and be patient with us as we run head first into this next episode. We’ll do our best to keep on task!

This is our Interview issue and we have a bunch of amazing stories about amazing people. We hope you enjoy it. Take your time and learn about some people you haven’t heard of before.

Now let’s wrap it up with a little bit about the birds. This past week we actually had a couple of nights of frost. And Kim was out of town, so it became my chore to let the birds out in the morning – usually he does that while I pack lunch and make breakfast. The funniest thing was the ducks on their very first morning of the iced over pool. This is their first Winter being not even a year old yet. There’s one female that heads right for the pool every morning and jumps right in. Surprise! The pool water was frozen solid, so she landed with a bit of a thump and just stood there looking very confused. I wished I had my phone so I could’ve gotten a picture. 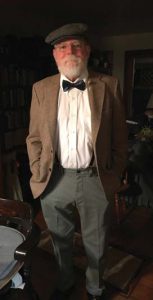 The holiday season is creeeping up fast and will be upon us as you get this issue. I wish you all a peaceful, and Happy Thanksgiving. And whatever your family looks like, I hope you are surrounded by them for a Wonderfully, Merry Christmas.