Although the calendar says it’s Fall, in Northeast Ohio it’s still very Summer like. It’s approaching mid October as I write this and it has been uncomfortably warm this past week – mid 80s. I know for some of you that’s tolerable, but here we’re not so accustomed to this warm weather this time of year. Although, October can be all over the map when it comes to predictable weather. I do remember taking my children out for Halloween and not needing a jacket and I do remember having all of our Winter garb on some years and only going up and down our block. 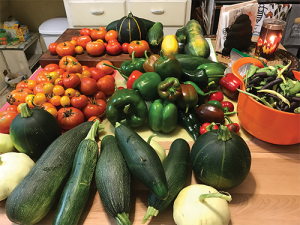 In mid October we have a Fall Foliage Tour that highlights a different part of Medina County each year. It’s a self-guided tour with a published map that takes you on a route where different farms and businesses are open and featuring activities such as hayrides, mazes, lots of apple cider and other activities. There are alpaca farms in the county that will have things going on, several apple orchards, farm stands with lots of apples and fall crops for sale. This is coming up this weekend and the temperature is actually supposed to drop a bit, so it will actually seem a bit Fall like.

The chickens are in that molting season, so not many eggs right now. We lost one this past month, so holding at 19 right now. She wasn’t one of the oldest ones, but not young either. It’s sometimes very dramatic when they die, but this was very quiet and subtle. We noticed for two or three days that she wasn’t moving around a lot and would sit right in the feed shoot that we have, so no one else could get to the food. On about the third or fourth day we found her in that spot not breathing. 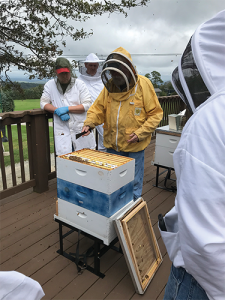 We had a great time, as usual, at Mother Earth News Fair at Seven Springs Resort in PA. The Friday before the Fair got into full swing, Kim, Shane Gebauer and Toni Burnham taught a Beekeeping Institute for Beginners. It was literally held on top of a mountain right on a lake – a beautiful setting. And we made it through most of the day before it started to rain. I think I might be the only one who got stung while I was busy taking pictures. The bees were nice and calm for the beginners.

The beekeeping industry lost another friend to cancer in September. Jack Thomas, owner of Mann Lake Ltd. passed away. If you’ve been in the business for any length of time you know of and probably have met Jack at some time at some meeting, somewhere.

I first met Jack at the 1994 EAS meeting which was held in Lancaster, PA. I had been doing my job of layout and design for about four years and that was the first big meeting I had the opportunity to attend.

I was a little ‘star struck’ to say the least. I knew of all of the important people in the industry, because many of them wrote for us and so I saw their pictures and read their words each month. But this was the first chance I had to meet many of the big names in the Bee World. That was also the year I met Jim Tew, Ann Harman, Richard Taylor, Roger Morse and so many more.

But my meeting Jack was memorable because he was the first person I had tell me that he really liked what we do here at Bee Culture. I didn’t know who he was until Kim told me. I had not experienced that until that moment. I just came to work each day and did my job. I already knew that I loved this job, but it makes a difference when someone, especially someone important, tells you that they like what you do.

I’ve never taken that for granted. Now I go to lots of meetings, have spoken at meetings, have organized meetings and there still is nothing better than having someone tell you that they appreciate and love what you do.

Kim and I also lost another friend to cancer in September. His name was Dr. Ricci and he was our dentist. But he was more than just our dentist, he was a very cool guy and was very important to our Medina community. He did a lot of good things. I knew him before I knew Kim, even before I knew my children. He had been my dentist for more than 30 years. He had a very large practice, saw lots of people, but always seemed to remember my boys’ names when I would run into him in the grocery store and he would ask how they were doing. Dr. Ricci will be greatly missed by a lot of folks here in Medina.

I don’t know what your Thanksgiving looks like, but I hope it is a peacful, happy event at your house. Ours looks a little different each year. Sometimes it is just Kim and I, or we have it on Friday instead of Thursday so more of our children (biological and extra) can make it. Sometimes it’s meatloaf or pot roast instead of turkey, but it’s always one of my favorite times. It’s the calm before the crazy holiday stuff starts. It’s the week I take some vacation and put up the Christmas tree!