Kim and I have been home most of the Summer of 2018. Now that doesn’t mean we have slowed down any, we’ve just been trying to tackle some of the projects around home. It’s amazing though, how quickly the time gets away from you. We were late with the garden mostly because of weather, but partly because of being too busy last Summer to finish up the garden and prepare for this year. Hopefully, we’ll do better this year.

We’ve had a few tomatoes, but waiting on everything else and hoping the weather holds and we have a nice long, hot end to the Summer. Lots of beans are coming up and lots of squash and lots of peppers – both hot and mild.

We both are crazy about plants of all kinds, so that’s taken up a lot of our time at home – working on getting the different flower beds in shape.

Being home has also allowed us to participate in some of the activities going on right here in Medina. For a number of years in a row Medina has been voted by Ohio Magazine one of the best cities in Ohio to live in. It’s a great place. I fell in love with it almost 40 years ago when I first moved here.

On a bright sunny Saturday morning in late July Kim and I attended a ceremony to dedicate Medina’s 9/11 Memorial. It was a nine-year project that was spear headed by a past mayor who did not live to see it complete. It sits right next to our Fire Station – very appropriate, don’t you think. 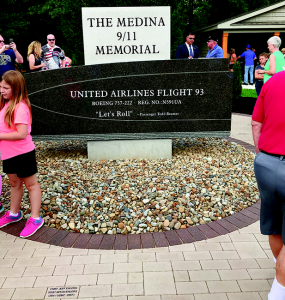 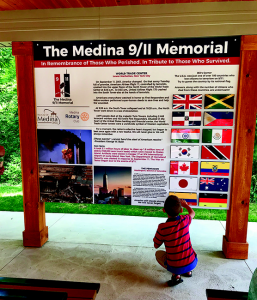 There are several of these information boards at the Memorial – good for teaching our children about the history.

The setting for the memorial is beautiful. It also honors the 40 that died in the plane crash in PA. There are 40 boxwoods planted around the memorial itself which contains a piece of the towers. There are picnic tables, beautiful plants and a shelter perfect for spending some quiet time.

In our yard are lots of milkweed plants and they’re not very attractive – to me they look like big weeds. So every year we compromise. I take out a few that show up in my perennial bed that I’m working on and leave most of them. So, this year Kim actually spotted one Monarch larva and capture it. We fed it the milkweed leaves and after a few days it spun its chrysalis and then one day there was a monarch on the dining room floor. Two cats were sitting there watching it and at first I was afraid they might have damaged it. But we put back in the jar with the lid, gave it a bit of time and a bit of sugar syrup and shortly after that off it went. 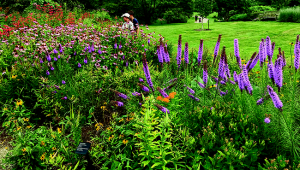 The first week of August Kim and I went to Holden Arboretum in Kirtland, Ohio and spent a day learning about Pollinator Habitats. This workshop was sponsored by Pollinator Partnership. We listened to several speakers talk about how to set up pollinator habitats – what is needed, what works best, large and small scale. After lunch we took an hour long walk around a very small portion of the grounds. It’s huge! We’ll be going back when we can spend a whole day just walking around. 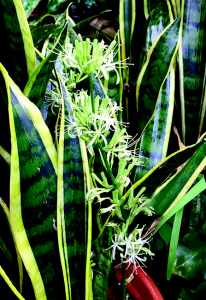 Another cool thing that happened at home. Kim has a plant called “Mother-In-Law Tongue” – Sansevieria. I’ve heard it called other names. In fact we have a bunch of them and they are all blooming. Now Kim says that in all his years of being a plant guy he’s never had one bloom. This plant has a history. The original plant came from one that his mother had. She’s been gone almost 40 years now and Kim has transplanted hundreds of plants from that one. We’ve given them away to everyone we know. So we like to think that a little piece of his mother has traveled the country.

September has snuck up on us again. The month that is part Summer, part Fall here in the midwest. All of the children are back in school, the leaves will very soon start to turn and fall, cooler nights – and don’t forget it’s National Honey Month.

We’re lucky here in northeast Ohio to have the dramatic season changes. Enjoy your Fall, whatever it looks like.