Chickens, Summer and The Garden

We are in the midst of a really hot Summer here in Northeast Ohio, and from what we see in the news it’s been strange and extreme weather in a lot of places. It’s mid-July as I write and we’ve had over 10 days in the 90s which is usually our whole Summer’s worth of 90° days.

Fortunately our chickens have a nice shady spot in the pen that they can go to and an extra shelter made out of old pallets, that allows them to get out of the hot sun. Water has been challenging. They go through a lot on a hot Summer day. We’ve been home most of the Summer – unusal for us – so we’re able to keep up with it. But we still haven’t found the perfect watering system, short of hooking into our plumbing system. I’m pretty sure we’ve tried almost every new watering device that has come on the market.

We’re still holding steady at 20 chickens. There are four of the ‘old’ girls who are over six years old now. I don’t know if they are laying anymore because we have all different colors, no white, of eggs. But they are enjoying life and that’s okay if they’re not pulling their weight anymore. They’re just fun to have.

Early on we had lots of rain, so we are very late getting the garden in. We have a young friend, Jeremy who was finally able to get in the garden to till it for us. But, like I said, it’s mid-July and we don’t have everything planted yet. We’re hoping for a nice long, mild Fall so things can keep growing. We resorted to having lots of peppers and tomatoes in pots on the deck, so we do have a garden of sorts.

We took a couple of days last week and headed to Amish country. Friday we took our time and took country roads working our way to Wilmot, Ohio where we spent the night. Ohio is the home of Smuckers in Orrville, Ohio – less than an hour away from us. They have the factory and warehouse there, but just outside of town they have a store, with a cafe. It’s fun to go to because you can find things that haven’t hit the grocery shelves yet. So we stopped there, stopped at an orchard, Jake’s Amish furniture in search of a bench and then made our way to Breitenbach Winery. 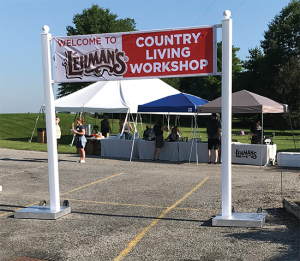 The main goal of the journey was the next day, Saturday at Lehman’s Hardware. They held an all-day Country Living workshop, with Joel Salatin being the keynote speaker for the day. Joel is an author, speaker, farmer and entertainer with a goal of getting all of us to pay attention to sustainable living. He’s written many books. I encourage you to ‘google’ him and learn more about him.

I’m not sure how well known Lehman’s hardware is in other states, but here in Northeast Ohio they are one of the go-to places. It’s a cool, somewhat old fashioned hardware store with everything you can imagine and lots of things you would never have imagined. This is the first bigscale, outside workshop they’ve held and aside from being in outside in tents when it hit 95° that day, it was a good day. When you got too hot you could go inside and roam around the store for awhile. The other talks included topics like all about herbs, chickens, even a talk on beginning beekeeping by a local beekeeper.

On the rare occasions when we just go to a workshop or meeting and not have any responsibilities, it is a treat. Sometime, though I have a hard time just sitting still for a whole talk.

We’re home until mid-August and then we head to Charlotte, NC for the Cabarrus County Beekeepers Event on August 11 and from there head immediately to Virginia for EAS. I hope we see a bunch of you there. Kim is speaking a couple of times and we’ll have our Bee Culture booth in the vendor area – selling books and subscriptions to both Bee Culture and BEEKeeping.

I hope you are enjoying the Summer. Christmas will be here before you know it.