The Garden, New Neighbors and Oregon. 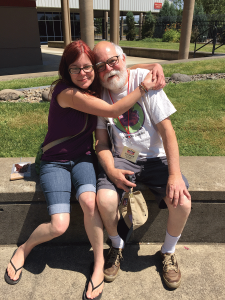 I hope you all had a great Memorial Day Weekend. Our city and county do a good job of reminding us what that day is really about. Medina has a big parade and a weekend of activities and most of the small townships have their own parade.

It was the first weekend home for Kim and I in a while. We took a couple of extra days on either side and worked on our yard, got the garden in and did some beekeeping also.

Around here the old guys will tell you to never count on the weather until after Memorial Day for putting in your garden. So I guess we were right on schedule. We did things a little different this year – not as much, spread out a little more and lots of cardboard and straw between rows and plants to keep down the weeds. I also planted a lot of flowers in the garden – partly because I went overboard on buying flower seeds. As is customary for us we planted mostly tomatoes. But we’ve also got different kinds of beans, lots of squash and some eggplant. I don’t really like eggplant much, but it’s a fun plant to grow and we can always find someone to share it with.

We like growing peppers too, but we mostly put those in pots around the deck. Lots of hot peppers this year for my son and friends. Kim doesn’t like any degree of hot pepper. I like hot, but not as hot as some of these are.

Then we were off again on another trip. We were anxious to see how things were doing. It’s amazing how fast plants will grow given all the right conditions. I was really surprised at the beans and the squash which were all planted from seed. Things are looking good right now. I got some of the tomato cages on last night. This weekend we’re supposed to have 90° weather and lots of rain.

We have new neighbors. We only have neighbors on one side, so we have been without for over a year. I think Kim was actually hoping for another Summer of not having to worry about anybody next door. But I think we got some good ones. They have chickens and ducks, extra points for that. As soon as she saw our beehives she decided not to spray all of the weeds in her yard, so that’s a good start. I quickly gave her a nice big jar of honey.

Keep a good thought. It always helps to have good neighbors.

Our last trip was last weekend to Albany, Oregon for the Mother Earth News Fair. It was hovering around 100° the whole weekend and bright sunshine.

Kim gave three talks – two outside in tents and one inside where it was nice and cool. But folks didn’t seem to mind the heat – the tents were pretty full each time. Kim and Shane Gebauer, from Brushy Mountain Bee Farm did a live demonstration with Shane inside the tent – in a beesuit – and Kim outside. This was the second time they’ve done this for Mother Earth and it works very well. They are a good team.

Shane opens up a hive and goes through the frames as Kim is outside answering questions and walking through the crowd with different pieces of equipment. 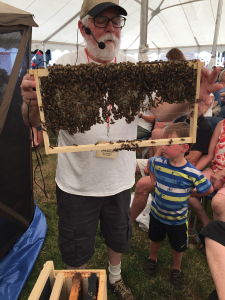 This time they got braver and Shane actually handed a frame full of bees out to Kim, who walked through the crowd. Nobody ran away screaming and nobody got stung.

The best part of the trip – we got to see Jessica, Kim’s daughter. She lives about three hours away but made the drive up to see us. So we had her for a day and night.

We’re home for a bit now. The new deck is done and we’re planning a July 4th get together with a few friends.

I hope you are having a great Summer and have a great holiday. If you have any good eggplant recipes, please send them my way and I’ll give this vegetable another try.