Kim and I spent last week (August 1-4) at the University of Delaware attending EAS 2017. We had not been to an EAS Conference for several years, so it was good to get to visit with old friends we hadn’t seen for a while. We had a book table in the vendor area. That’s always the best spot in the house if you want to know who is at the conference, because everyone visits the vendor area at least once.

There were three beautiful yellow Labs there during the week – all service dogs. In my opinion this is one of the best dogs around. I had a female yellow Lab when my boys were little. She lived almost 16 years and was the sweetest dog ever. The one male service dog at EAS was never on a leash. He stayed close to his lady and was always watching her to see what her next move was. Great dogs!

As has always been typical it was really hot in Delaware the week we were there. But the folks running the beeyard got lucky with no rain – maybe an afternoon shower one day.

It was a good week. Several of our writers were there. It’s always nice to get to see them in person. They’re all excited about coming to Medina in September for the ‘Voices of Bee Culture’ event. We hope to see you there. There’s still time to sign up. Check it out in this issue and sign up on our web page. 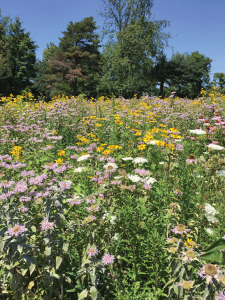 Our Root Pollinator Gardens were in full bloom for our Pollinator Day in mid-July. If you’re every passing through Medina stop by. We’d be happy to show you the gardens.

EAS 2018 will be held in Virginia next year, so watch for details. This organization has been around for over 60 years and there were just over 600 attendees there this year. They offer a Short Course at the beginning of the week, then a three-day conference, a Master Beekeeper course and a working beeyard each year.

So, the young rooster I told you about last month had to go away. He didn’t go far – just to live at the neighbor’s house. I know some of you are thinking you would have made a nice pot pie or soup out of him. But that’s not me – I can’t eat animals that I’ve known personally. I do like chicken but I want it to come in a nice package from the market. We gave him every chance to just be nice and get along. I guess that wasn’t in his nature because he started to get very bossy and nasty. So off he went and the ladies – young and old – are calm and happy. The young girls have not started laying as of this writing. They’re about three and a half months old, but they have adjusted nicely to living among the older girls. So we’re holding at 20 hens right now – four that are five years old, eight that are two years old and eight that are babies.

This week we took off eight medium supers (eight frame) of honey. They’re sitting in the garage tightly covered waiting for someone to get time to extract them. I think we’re at about eight hives right now. We have one really nasty one that we need to deal with. It’s probably going to go away this weekend. They chase me when I go by on the lawn mower and always seem to be just waiting for us when we take off the top – not fun! 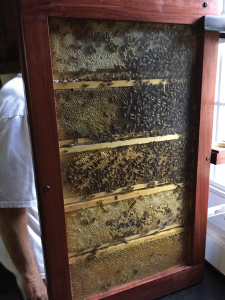 The new observaton hive inside the Root Candle Store in Medina.

We have a new observation hive in the Root Candle store here in Medina. We had Peter Sieling redesign it and it is beautiful. A local carpenter came in and made sure everything matched up as far as the hole and the pipe for the bees to get in and out – and not end up in the store with the customers. He built a beautiful platform for the hive to sit on which is also nice and secure from any curious young hands wanting to mess with it. We started a nuc on our front porch and then when the observation hive was ready we switched them over. They have a good queen and seem quite happy. Hopefully they’ll make it through Winter. That’s always the most difficult part for us.

Well, Fall is almost upon us. Bee Culture has two great events coming up right here in Medina. It’s pretty nice here in NE Ohio in the Fall. Take a look in the issue for information on our “Voices of Bee Culture” event September 22-24, and a one day class called the Hardest Season taking place in October. There is still time to sign up for both.

Hope to see you this Fall in beautiful downtown Medina, Ohio.