Sometimes you see things that are very funny and you break out laughing even when it is really a serious situation.

I was at a beekeepers field day and there were so many people there that we were divided into three groups. I was listening to what the speaker of our group was saying when I received a nudge from a friend standing next to me. He pointed to one of the other groups. What did I see? There was a beekeeper putting on his “new” veil. The veil was one of the slip-on jackets with the veil attached. The beekeeper had slipped on the veil, but had gotten it backwards. Here he was starring at the white protection backing that would keep the bees from stinging him in the back of neck. I can imagine that what he was seeing would be like looking at a blank movie screen. He had discovered that the veil was on backwards and so was tugging at one side of the veil and it just wouldn’t move. After three or four tugs and changing sides of the veil, he decided that he should take the veil off and put it back on because his arms were preventing the veil in turning. So he attempted to correct the situation, only to get the veil back on in the backward position. He then attempted a third time to get the veil right and was successful. However there were about a half a dozen or more of us in the other group that were amused. In fact, I had a friend in our group that always has a camera with him and he sent me a picture of the situation. However over the years that photo has gotten lost and it wasn’t that clear as it was taken from about a half block away. 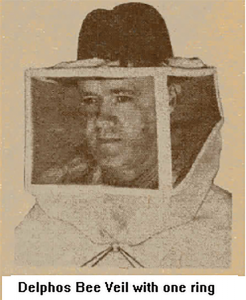 I don’t know if slip-on bee jackets have a little tag that is similar to the one used by the shirt manufacturers. The tag is sewn on the inside left seam. But if they do, it lets you know when the garment is inside out and the front is oriented correctly. Otherwise, you may find it difficult to put anything in your vest pocket. When you see that tag, remember left is right. If you have a zipper model, it is very difficult to get those on backwards.

If you asked my opinion, that beekeeper had purchased the right type of veil. There are no drawstrings to come loose and when you lift heavy supers, they can rest on the jacket instead of messing up your shirt.

Many companies try to sell you entire bee suits. The suits are available in an assortment of fabrics and colors. You might even try on a suit while you are in the store. Yep, yep you normally would wear a large and the large suit fits nicely over your clothes. You buy it and go home a happy camper. The nice warm day when you first try out your new suit comes and you discover that, golly it gets hot in there. It is not hard at all to work up a sweat, so maybe unzipping the suit a little will cool you off. In the back of your mind you think, Maybe next time, I’ll wear just underwear under the suit. Then a little bit of reality sinks in. Where are you going to change? When you get home and try to get out of the suit, it seems to have shrunk or it is stuck to your clothing. Gosh this is hard to get out of. You wish that you were double jointed. Perhaps you should have purchased a larger size.

There are tie down veils that a person can buy. Did you ever notice that the people that make veils now days must have never been beekeepers? Some veils have a taper to them so you can tell which side is front. Likewise the skirt has a taper to it so that it is even at the bottom. On the bottom of the skirt the fabric is folded over making a tube for the draw string.  The drawstring is fastened at the rear of the veil and the ends come out at the front of the veil. Oh, it looks nice! How in the world are you going to tie it down to keep the bees out of your face? You could pull on the drawstring and close the gap, but that is like tightening a tourniquet on your neck. Some manufactures put elastic along the bottom of the skirt. 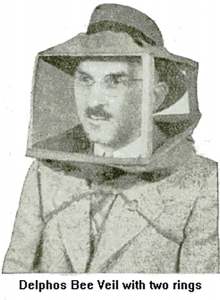 It wasn’t always like this. As early as 1918, the Indestructible Veil had the tie down with two rings on an elastic strap. By 1924, the Tulle Veil, Alexander Veil, and the Delphos Veil had the double rings. But in 1973, someone changed it to a single ring.  Perhaps it is it was cheaper to have only one ring or maybe it is more fashionable. Beekeepers don’t need to get samples to their mouths anyway. The veil manufacturers aren’t wearing the veils anyway and running the risk of having puffy or swollen eyelids.

In order to wear a tie down veil, most of them will need to be modified back to the early standards. The tie down string needs to anchor at the rear of the veil’s skirt. The length of the string depends upon the stature of the beekeeper. I like to use two rings on a short piece of elastic. This allows the veil to stretch for honey samples without taking off the veil.  The length of each string is figured as coming from the anchoring point down to a belt loop or around the belt and up to the front ring. From the front ring, the string goes to the beekeepers back and ties with the other string from the other side.  Too much string gets in the way and a short string means that you have to figure out a different way to anchor the veil. If you can’t find two small rings, a safety pin will work but it frays the string.

Of course you could work your bees without a veil, but I would not recommend it. An unhappy bee usually gives you a couple of warnings before she stings you.  The first warning is where she flies back and forth in front of your face making all kinds of buzzing sounds. The reason that she flies there is that she is zeroing in on the carbon dioxide that you exhale.  If you ignore that warning, the next one is where she flies and bumps in to you as though she was blind.  She really isn’t blind; she was warning you that you are in her space. Failure to heed these two warnings, results in a quick sting.

Stings to the face can be painful and sometimes cause permanent damage. I believe that most painful sting that I ever had was between my nostrils.