Biologists, beekeepers and economists are all working together at the University of British Columbia (UBC) to help beekeepers deal with challenges being faced by the industry.

Leonard Foster, a professor at the Michael Smith Laboratories at UBC in Vancouver, Canada, is studying integrated pest management of honey bees.

“My research into honey bees focuses on understanding how bees are able to resist disease and then using that knowledge to try to provide tools to beekeepers that will allow them to select for bees that are disease resistant. An important consideration there is that we are not trying to genetically modify the bees to make them disease resistant. In part because the technology doesn’t really work for bees so we don’t know how to do that anyway,” said Foster.

“Instead, we’re trying to understand how the bees are able to resist disease and then amongst the natural variation within the bee population be most disease resistant.”

Its important research for the nearly 10,000 beekeepers in Canada. According to the Agriculture and Agri-Food Canada, there were 9,859 beekeepers across Canada in 2016 including 2,640 in B.C. alone.

There are also over 750,000 colonies across Canada, of which there were 39,885 colonies in B.C. Honey bees produce about 75 million pounds of honey in Canada annually.

According to information on the Foster Lab website, beekeepers in North America have lost about a third or more of their bees every year which is roughly three times the historical average. The project the lab is working on is trying to reverse the trend of colony losses by creating new integrated pest management tools and creating recommendations for the honey bee industry.

There are several tools and recommendations being created including protein markers to help with the selection of honey bee stocks that have natural disease resistance.

Another is “RNAi-based treatments for bee diseases” and a third is a best practices guidelines for integrated pest management.

“The obvious way is to let the bees go and have diseases and the ones that survive are going to be the ones that are disease resistant but that doesn’t work for a few reasons,” said Foster.

“One is beekeepers need bees year over year in order to run their business and the number of bees you would need to run that sort of natural selection process would be enormous and it’s not just feasible and there are also other considerations as to whether bees survive or not such as how harsh the Winter is and what type of predators might affect those bees,” he continued.

Losses in colonies are attributable to a variety of factors including bee specific infectious diseases. 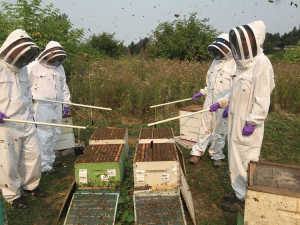 Although some diseases can be controlled using chemical pesticides, “many of the bacteria, viruses, fungi and mites responsible are becoming resistant.”

According to information about the Foster lab, “as consumers become more aware of what we eat, chemical residues in honey and bee pollinated crops are less accepted. Integrated pest management is the combination of a variety of approaches to control and manage agricultural pests and diseases; it can include biological, physical and chemical controls.”

According to Foster, another issue for bees and beekeepers is the way that bees producer.

“Another complication here for bees and beekeepers is that it’s not like cows or sheep where you can put a male and a female in a pen together and get them to mate. Bees have to mate naturally in the air, usually away from where the hives are and one Queen Bee will mate with usually 15 to 20 male or drone bees. So, in order to control that, you need to make sure that all the drones that your Queen might encounter are also from disease resistant colonies. One of the tricks that we’ve had to use is called a closed mating system where we go to Bowen Island and by being able to control all the bee colonies that are on the island, we can allow the Queens that we want to mate with the drones that we want.”

Ian Kennard is one of the beekeepers from Bowen Island that was involved in the study.

“About 2014 at the BC Honey producers AGM, Leonard had announced that they had come to the end of the research project for the protein marker selected research and they wanted to work with bee breeders that would be interested in going through the process of having their bees tested,” said Kennard.

He and another beekeeper suggested Bowen Island as a site for the research.

“(Bowen Island is) fairly close to the city (of Vancouver), fairly isolated in terms of we don’t have to worry about bees flying over to Bowen Island,” Kennard said.

Heather Higo was the project field manager for Bowen Island.

“They (the two Bowen Island beekeepers) have both worked with other beekeepers over there and helped coordinate that with us so that we can control to a great extent the population of drones on Bowen Island so that when we do isolated readings over there its with the desired mating stock that we want our Queens to mate with,” said Higo.

“We’ve been following Leonards research for a number of years. They were getting fairly close to being able to test bees from breeding stock and we had been following it because we felt this was a good way to improve our stock by having it tested for hygienic behavior,” said Kennard.

“At that time we were just looking at hygienic behavior. When they announced they wanted to do this, we jumped on board and offered to set up the nucleus colonies. They went around testing the drones and the Queens from other colonies around the Lower Mainland and other parts of the province. They would bring those over to Bowen Island and we would do the breeding it,” Kennard continued.

“So it was a three year project. They got funding for a three year project. That came to an end last Summer. We’re still waiting to see what’s going to happen going forward here. I think we’re speaking with Leonard near the end of January. He’s coming over to speak to the BOwen Island municipality as to what we’ve been doing here on the island for the last three years here. We’re hoping that some other aspect is going to go forward.”

“(We’ve) seen progressively hygienic in the Queens and offspring that we are producing. Its gone very well. Our methodology has improved a little but every year as well because we’ve learned from our mistakes,” she said.

For Kennard, working with the scientists was an eye opening experience in terms of the amount of protocol they have to follow.

“We had to do things I normally wouldn’t do but I see the reasons some of the stuff they have to follow like clipping the Queens wings and stuff like that, especially the project Queens so they don’t fly off into the natural environment, have control over where they go,” he said.

Foster is also co-leading a project titled BeeOMICS. Its aim is to develop protein biomarkers that will allow selective breeding honeybees for 12 economically valuable traits.

It will benefit beekeepers by gaining tools to select improved colonies that are pest free, disease resistant and produce more honey.