In case you haven’t noticed, Africanized honey bees have not gone away, have not gone back to Africa or Mexico, nor have they surrendered to the European Honey Bee Police and given up. They are still out there and still killing people when the opportunity comes up.

There are several things worth noting that are, as near as I can figure, more right than not that should accompany that first statement. The first is that beekeeping in the areas that are, or are suspected to be hosting African and Africanized bees has not gone away either. The second is that beekeepers in those areas, or at least some of them, tell me that the bees in their boxes are not the banshees from heck that will kill you in a heartbeat if they even suspect there’s a threat to home and hearth. Rather, they are working with – either normal European honey bees produced by a queen from some place other than where these bees normally reside, or, and this is the interesting note, the bees they have are a – take your pick – hybrid of the more docile European and nasty African bee that is not nearly as defensive as one side of its heritage is, or as gentle as the other side of that mating, because they are something in between and they are more manageable than not. And, they are quick to point out, the true-to-life meanies, or the ‘selected-for-gentle-but-still-Africans’, and even the hybrids mostly all laugh at any issues with Varroa mites. 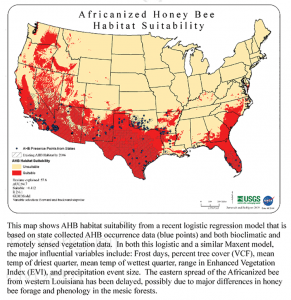 In fact, some of these good people routinely take me to task for not advocating that queen producers should be using the traits that reside in AHBs that allow them to resist, no, allow them to laugh at Varroa. And I’m not the only one they chastise. Pretty much anybody who isn’t keeping these bees is, by some standards, harboring second rate bees, keeping bees that need coddling, and are chemically dependent for both Varroa control and feeding. So there. Most of these folks, you have probably guessed, are on the treatment free side of the coin. Preferring bees that have managed to survive their local conditions without medications and without having to be fed, and sourced from local suppliers, cutouts and feral colonies. There are quite a few folks who make this work for them.

But what brought this to my attention was an email from somebody who is in this group that resides in the SW part of the country, where the bees that aren’t sourced from someone outside that area have some level of AHB blood in them. The mixed breed isn’t harsh enough to be unmanageable so beekeepers are content to use this local stock.

But the fact that there are still feral bees in the area that do have the worst of the worst behaviors, and routinely take control of  hives that aren’t AHB led, and that can and will defend a feral nest with the ferocity commonly assumed for Killer Bees remains. This is undisputed. Not common, but viable. I’ve included a map showing about where these bees are and will be relative to vegetation and climate in the southern U.S. and parts of the west coast.

And Killer Bees got the attention of at least three people in August in the SW. And they died. Two of these people were overwhelmed by thousands and thousands of defending bees, and one died because of allergy. But the bees were African, or Africanized. It still happens. It doesn’t make the national news anymore because it’s old news. And it’s not common. And that it happened again was because it was more than likely the person’s fault, not the bee’s. It will still make the local paper, often below the fold or even inside, but it will be there, with all the gruesome details. I really can’t imagine what that experience can be like. Not even close.

Most of these states, probably all of them have made available information on dealing with a Killer Bee finding and what to do if attacked. The University of Arizona provides the eight point information sheet next to the map and it is typical, and good. But I don’t think I’ve ever heard of anybody being killed by running into the road and being struck by a car, which is something I would not have thought of. So I learned something today. 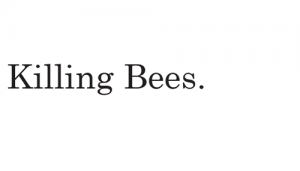 So what brought all this up, he says finally, is that I was recently in a position where a colony had to be controlled, right now. Not tomorrow, or next week. Not even later today. Now. The first thought that went through my head was the information I got from the Florida Inspectors on how to do this in an emergency. Their advice, because they encounter these bees on occasion, is to always have a very large lawn leaf litter bag or three in your apiary all the time, stuck under a colony or somewhere so it’s handy when you need it. And when you need it, you grab the bag, put it over the colony all the way to the bottom where the entrance is, tip the colony over, and tie the bag shut. That keeps the bees in immediately, and the heat from the Florida sun will kill the colony in minutes. A most perfect solution. Well, the bees seldom think so, but if you save a life that’s what counts. But it is a terrible loss because these colonies are seldom weak, diseased or in trouble. They tend to be strong, big and healthy. What a loss. What a shame.

Anyway, we weren’t in possession of a bag so we had to make it up as we went along. Years ago we did a video on how to handle honey bee emergencies for fire departments. It’s been used for years and is still pretty much accurate, though technology has upgraded fire trucks and fire truck chemistry so they do things somewhat differently now.  But the sure-fire way to stop a beehive then, and still, is to soak the bees with cold soapy water. And that’s what we did.

We had a good garden sprayer with lots of pressure and a wide angle nozzle that delivered quite an amazing amount of liquid when engaged. We suited up, two smokers lit, sprayer pumped and five gallon pails almost filled with cold soapy water and headed out. They met us, oh, probably 30 yards from the hive, bouncing off suits and veils like a hailstorm. We moved fast and got to the colony before it got too riled up and smoked the heck out of the front, driving everybody back in then closed it tight. Meanwhile I popped the top and inner cover and as soon as the front was closed dumped those two five gallon pails of cold soapy water down between every frame and slammed the top down hard and fast. As I was dumping the bees in the air were being sprayed, and, to quote the article I wrote the first time I had to do this, flying bees, when sprayed, dropped like cold, wet stones. Dead before they hit the ground.

We waited about 10 minutes, enough time to get two more pails, and did it again, nearly filling the bottom deep again. Then we moved the top box, sprayed anything moving on top bars or between frames, did the second and finished with the bottom box. We bagged up the boxes and removed them from the crime scene.

But it was daytime, and there were bees in the air, and bees far from home and bees stunned but not dead, and in a couple of hours they returned, calmed down and came to and soon realized home was no longer where it had been. Nothing remained except the wet bodies of thousands of sisters, a muddy spot, and the smell of death. So they gathered together, a grouping of, oh, maybe a pound of bees and clung to each other hanging on a tree limb that overhung the killing field. When it was dark we went out to finish them and they were still in a mood, waiting until we got very close and with only veils we paid the price of revenge, but in a few minutes finished off the rest. All gone but a few stragglers, bewildered and lost.

I share this not because I’m proud of having to do this, or succeeding, but because it’s a skill set you should have. Moving a nasty colony to a location where they will not harm people is always good and then requeening it so you get to keep the bees is the first best choice. But when lives are threatened people will look to you as the beekeeper and assume you know what to do. Now you do.

The University of Arizona provides the following information regarding bee stings.

All wild honey bees in Arizona are presumed to be Africanized.

If you encounter a hive or swarm, assume they are Africanized honey bees and do the following:

Be careful out there!