I like to think I have a green thumb. Actually, on a good day, I like to think I have 10 green fingers. Way back when, I accidently discovered the world of greenhouses, apple orchards, turf farms, home gardens and lawns and even more. Once discovered, I got good at it fast because to get the job that would give me all the experience and training I needed, and wanted I told the College Professor who hired me I actually had some experience and he could rest easy now. So I got good in a hurry.

In fact, I got so good the USDA noticed and offered me a job doing, what else, growing things. But to get that job I had to learn about bees. And that changed things. My green fingers got covered in honey and wax and life moved on. And here I am.

I still have 10 green fingers though. And, like I offered one of my bosses here a few years ago, I could grow petunias or cotton on your living room carpet if your wife didn’t mind the wet spot. So at home we have a lot of plants. The yard has lots of landscape plantings of shrubs and trees and vines and annuals and perennials and wild pollinator gardens, all native and all picked for bees or birds or both. And just because, there’s blackberries, raspberries, elderberries and asparagus, and until last summer a few apple trees. And then there’s the garden with all the garden things that should be there – peas and squash and melons and tomatoes (12 kinds), peppers (10 kinds), a bunch of different beans and herbs, cukes and even some flowers for bouquets. We grow way more than we can eat and give a lot of it to folks who have just regular fingers. 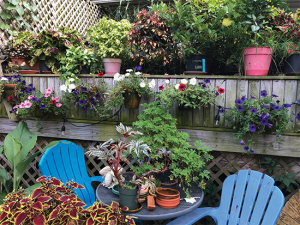 And then there’s the deck out back. It’s foot print is the same size as the foot print of our house. It’s on two levels, half and half for square feet. The upper deck walks out of the dining room and there’s a staircase on one side going down five steps to the lower level. There’s a firepit thing we use once-in-a-while on the lower deck, chairs, tables and plant stands and shelves for plants and lots and lots and lots of flowers and cuttings and herbs and the like on both. There’s walls and lath on two sides to keep the neighbors at bay, and we hang pots with special pot holders every place that’s empty and fill them with hanging flowers, and on top of all those walls and screens there’s more pots with flowers.

And when we do the garden seeds in late winter, we always do more than we need or have room for in the garden, just in case, you know. So when the garden is in, there are always leftovers, and it’s a crime to not plant those Sweet One Hundred cherry tomatoes somewhere, or those extra jalapeno or poblano or hot chili peppers somewhere else, so they go three in a great big pot and they, too, sit on the deck all around the edges, both inside and outside the lath, forming kind of a soft, green horticultural buffer enclosing us even more. So all summer long we can sit by the fire on warm summer evenings, munching on sweet cherry tomatoes, sweet peppers of some kind or a great big Mortgage Maker tomato all night long. All told, by the 4th of July there’s over 350 pots of all kinds of plants on or near the deck that give us food, color, shade, cut flowers, just flowers, or herbs or just plain leafy, frilly green plants. Is this an obsession?

I actually spend more time taking care of plants than I do bees in the summer, but not much, and it isn’t work. Watering, feeding, transplanting, pruning, moving – 10 green fingers.

The bee work is pretty much done by the end of October – harvesting, wrapping, wintering, screening. Then the Winter plant work starts.

Of course the veggies are done by November 1, but those Jade and philodendrons and cactus and begonias aren’t hardy, and aren’t done, so they all get brought inside. This year we have 245 pots in the house. Forty five on the first floor and the rest in the basement, under a couple dozen florescent and LED light fixtures.

There are two small rooms in the basement. One has the furnace and can be closed off, and the other was meant as storage and it, too can be closed off. The two rooms are on one side of the basement, with a brick wall separating them. The furnace room has 35’ of bench space 2’ wide with lights above, that hold most of the smaller plants, and there’s another bench in the open room that’s 8’ x 3’ wide that takes a bunch of medium plants, and there’s the sump pump corner that about a dozen really big plants sit around, and we have a kid’s swimming pool that all those hanging plants hang over. The single faucet in the basement is right next to the sump pump.

OK, why all this about plants? There’s a good reason, actually. To water all those plants some time ago I ran a hose from the sink in one corner near the sump, along one long wall, under the platform that holds the freezer and my antique extractors on the short wall, under the wall into the furnace room. The hose I chose long ago was chosen because it had been outside for a season, and it was a piece of crap. Both ends had some kind of plastic sleeve on it that made it impossible to attach it to anything – faucet, nozzle, sprinkler – easily, and then, it always, always leaked. On both ends. And it was too short to be really useful on a deck that had been enlarged that year. Being outside that wasn’t critical, but it was messy and inconvenient and heavy duty so difficult to. Get rid of it was the easy decision, even though it was expensive and almost new.

So I made two bad choices. I kept it, and instead of leaving it outside, I took it to the basement. Up to that Summer, all my water came from a cistern – rain water, or delivered in a truck. So water use was always frugal. Short showers, garden water only at night and then as little as possible, you know the game. But once city water was hooked up, water was essentially free (not quite, but it was easy), so instead of saving rain water all Summer in kitty litter jugs to be used all Winter in the basement, I could hook up a hose and do it all.

But that hose wasn’t any better inside than out, and leaks and mess were the name of the game. And it was too short in the basement to reach all the plants, so I still had to use a watering can for a lot of them. And I bought that hose to eliminate that exact task.

But, and this counts, the basement in this house had leaked since the day it was built, over 85 years ago. It was always damp. So a little damper, especially during the dryer Winter wasn’t really a problem. But that Summer we fixed that damp. My neighbor that Summer did some landscaping to his lawn to try and fix his wet basement, failed miserably (don’t ever hire an accountant to do drainage, like he did), but made my damp basement much, much worse (and his, too. Not a lot of pity from me on that). So I hired a drainage expert, he laid out a plan, I doubled it, and since that day, not a drop of water in the basement. Not one. Except for that hose.

The wrong tool for all the wrong reasons. I’d kept using it because it was too expensive to discard, I’d chosen it so there was this pride thing involved, and spending more to fix the problem was even more expensive. But at what cost? Frustration, time, time, frustration, and always a mess. Not sure how much frustration costs, but you can measure time by the dollar.

So that’s what this is about. For whatever reason, using the wrong tool costs you more than replacing it with the right tool. Think about what you do with bees every time you do bees. Smoker too small so you have to stop and refill. Dull hive tool. Truck too small so you have to make two trips. Bee suit with a hole in it. Extractor too small so you have to stop too many times to load and unload. Drain in the floor runs too slow. Only one light in the florescent fixture so can’t quite see to get everything really clean. Bee escape in the window plugged and bees can’t get out. Mirror on the passenger side busted so can’t see anymore. And the taillight is out. Six inches of gunk on the warehouse floor. That one beeyard that just doesn’t produce any more, but truck’s too small to move it just now. Gate lock broken so have to jury-rig it every time. Driveway into that new beeyard still too muddy and get stuck five times out of 10.

When you don’t have the right tool everything that can go wrong, will go wrong, sooner or later. Too often it is always going wrong, but it means money and time and work to make it right. Of course making it right saves money and time. Take an hour this month and take a look at everything you do, and have to do twice and how can that be fixed. The right tool for the job is the smarter way to go. but you knew that.

Take a look at the Monthly Honey Report this month. We went back and got the numbers from last December, like we always do, so you can compare what was a year ago to what is today. With only a couple of exceptions, prices are up just a tad, which is promising. However, note that though these prices are about even, what in your operation is as stable? Income the same, costs are – the same? I’d wager not. Stay tuned to next month’s International Honey Report, which will shed even more light on whats’s going on and why.

It’s Christmas and New Year’s Holiday. Take some time with family and friends. Bee Culture’s had a pretty good year after several with some amount of stress and churning. We hope you and yours are doing well and that next year is even better. Merry Christmas and Happy New Year!