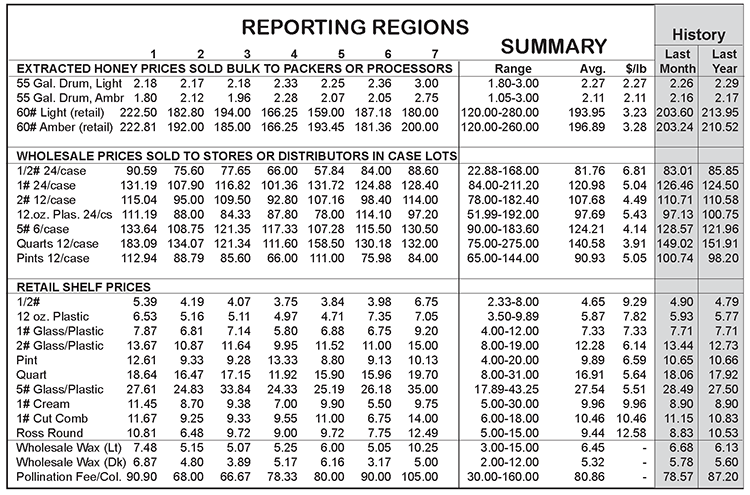 For the 8th time we went to our reporters to see what they sell that’s made by their bees. Because we get new reporters and lose some every year, and stuff happens from year to year these numbers don’t change a lot, but do change some and it’s instructive to see the evolution of these product sales.

Of note this year are several components. Selling honey wholesale isn’t surprising, but a 12% bump up from last year deserves attention. Region one was the reason, as now fully 75% or the reporters there sell at least some honey wholesale. Reporters who pollinate follows the trend as the numbers get back to where they were previously, and the same with chunk honey producers. Selling bulk wax is way up, but with a poor honey crop this year you have to wonder why. Some beekeepers simply sit on wax as income insurance – good honey and lots of wax last year offsets poor honey and no wax this year…it’s money in the bank.

Queen sellers are increasing, and we have to bet that means queen producers are increasing. This, too, is a trend in local queen production seen everywhere the past few years. A good trend to see. Interestingly, propolis sales are up this year by quite a bit, and pollen collection is heading back where it should be.

Reporters selling beekeeping supplies continues to erode, though slowly. Recent research here at Bee Culture, asking major suppliers how much affect have online sales from Amazon (though some sell direct from Amazon, there are lots of foreign manufacturers selling nearly identical equipment on there also) had on their businesses, and a 20% figure wasn’t uncommon. If you are a mom and pop operation this has to hurt so it’s not surprising to see more reporters selling queens and packages, and getting out of the smoker and beesuit business, which are very competitive areas.

Candles and wax blocks and lotions and potions and soap aren’t huge contributors to the cause but you can’t fault them because they are steady as a rock, every year. If you don’t have them in your inventory perhaps now is a good time to try making some. Solid performers, every year.