From pesticide detox to increased longevity, the pros of the sweet stuff go well beyond simply nourishing the hardworking insects in the hive 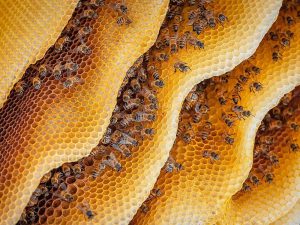 It should come as no surprise that bees know a lot about honey. They aren’t only honey producers, they are also consumers, and pretty sophisticated ones at that. Offer a sick bee different varieties of honey, for example, and it will choose the one that best fights off its infection.

People, on the other hand, have a lot of catching up to do when it comes to the nutritional nuances of honey. Just a few decades ago, most lists of “functional foods”— those that offer health benefits beyond basic nutrition — failed to mention it, says entomologist May Berenbaum. “Even beekeepers — and certainly bee scientists — considered it nothing more than sugar water.”

Since that time, a large body of research has revealed that honey is chock-full of plant chemicals that influence honeybee health. Components in honey can help bees live longer, boost their tolerance of harsh conditions such as intense cold and heighten their ability to fight off infections and heal wounds. The findings hint at ways to help bees, which have been hit hard in recent years by parasites, pesticide exposure and habitat loss.

“It’s just such a remarkable substance, and I think people maybe still don’t quite appreciate it,” says Berenbaum, of the University of Illinois at Urbana-Champaign. 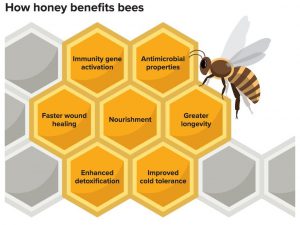 Honey, and the plant compounds within, impart all sorts of health benefits to bees. Reporting by B. McCoy / Knowable Magazine

A dive into the hive

It’s tasty on toast or stirred into tea, but honey is much more than a sweetener. Certainly, the viscous liquid is mostly sugar, which hive members use for sustenance, but it also harbors enzymes, vitamins, minerals and organic molecules that give each honey its uniqueness and confer a slew of health benefits to bees.

A variety of insects can produce honey — bumblebees, stingless bees, even honey wasps — but only honeybees (Apis species) produce enough to stock grocery store shelves. This ability didn’t happen overnight; it was millions of years in the making.