Honey Bees Show a Taste for Soybean in New Study 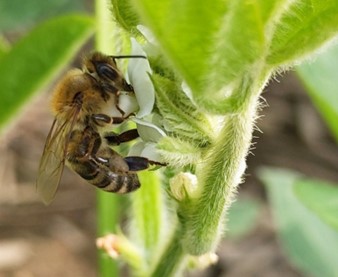 Soybean’s reputation as a poor source of nectar for honey bees may be undeserved, as a study of honey bee pollen samples and waggle dances shows a clear attraction to nearby soybean fields. Shown here is a honey bee (Apis mellifera) probing a soybean flower for nectar. (Photo by Sreelakshmi Suresh)

Among beekeepers, soybeans have been commonly viewed as a poor source of nectar for honey bees, but scientists at Ohio State University suggest this key crop does not deserve its bad rap.

That’s good news for honey bees (Apis mellifera) and for the people who raise them, because since the 1960s soybean production has increased by a factor of 13 worldwide, with almost 90 million acres cultivated in the United States alone.

“Future research efforts aimed at enhancing mutual interactions between soybeans and honey bees may represent an unexplored pathway for increasing soybean production while supporting honey bees and other pollinators in the surrounding landscape,” the researchers write in a study published in September in the Journal of Economic Entomology. “Beekeepers may be unknowingly harvesting a substantial amount of soybean honey.”

At first glance, say the researchers, soybean plants do not seem attractive to honey bees, which rarely are seen foraging among them. However, bees may actually be bustling undetected among the small, pink soybean flowers, hidden beneath a thick canopy of leaves. Moreover, the amount of nectar produced by different varieties of soybeans varies, so some are more productive than others.

“In this study, we found that honey bees actively forage in soybeans in Ohio, and that soybean blossoms play an important role in honey production,” says Chia-Hua Lin, Ph.D., a research scientist at Ohio State’s Rothenbuhler Honey Bee Lab and lead author of the study.

The Ohio State team reached its conclusion after a two-pronged approach to determine the value of soybean agriculture to honey bees. The team analyzed pollen in honey samples from apiaries near Ohio soybean fields on a microscopic and molecular level. The researchers paired these results with observations of honey bees’ waggle dances in two experimental colonies near soybean crops at the Molly Caren Agricultural Center near London, Ohio. The waggle behavior is an instinctively choreographed dance by which honey bees tell their hive mates the location of nectar sources. The length of a line along which a bee waggles indicates the distance from the hive. The angle from a line perpendicular to the ground, taken in flight away from the position of the sun, shows the direction.

Results showed soybean pollen in the honey that increased in proportion during the July-August blooming period. Overall, say the researchers, “Soybean pollen was detected … in 17 (55 percent) of the 31 samples analyzed.”

The strong preference of honey bees for soybeans was striking. Honey bees studied “preferred soybean fields over other foraging habitats between 0.5 and 1.5 kilometers from the hive,” according to the research. Outside of those parameters, whether bees foraged among soybeans or other sources of nectar was a toss-up, with the proportion of soybean nectar depending on its availability. At no distance did bees show a preference for non-soybean habitats over soybean fields.

Waggle dancers were videoed and analyzed with special software. In general, bees preferred soybean fields for foraging over other habitat types. The closer to the hive bees foraged, the more likely they were to home in on soybeans.

In the long run, the value of soybean nectar to honey bee populations will have a payback for soybean growers. Greater pollination by bees will considerably increase soybean yield.

Says Lin, “There is no doubt that the extensive areas of flowering soybeans can supply a substantial nectar flow for bees in mid-summer. Our next big question is, how do we harness the pollination services provided by bees to increase soybean yield? We are currently working with soybean farmers and beekeepers to study management strategies that will benefit both stakeholders and improve sustainability in the corn-soybean agroecosystem.”

We are here to share current happenings in the bee industry. Bee Culture gathers and shares articles published by outside sources. For more information about this specific article, please visit the original publish source: Honey Bees Show a Taste for Soybean in New Study (entomologytoday.org)