Buzzing Biology: honey bee researcher joins the U of Alberta

Dr. Olav Rueppell says that it isn’t the bee populations that are diminishing, but rather their caretakers.

“The honey bee is not going to go extinct because it is so intensely managed, and a lot of beekeepers are putting a lot of effort into keeping their populations up,” Rueppell explained. “But we have to be somewhat worried about the extinction of the beekeeper.” 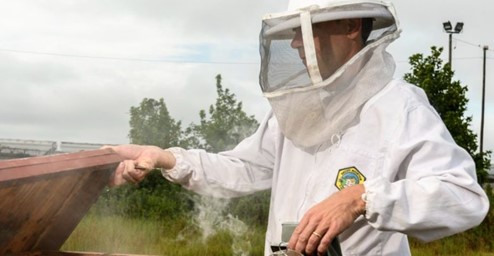 For Olav Rueppell, a biologist studying social insects, honey bees are much more than a friendly buzz heard overhead in the summer.

Rueppell joined the University of Alberta this past semester as a professor of Biology in the department of biological sciences. His research uses honey bees and other social insects as a model to help explain general biological questions, such as the phenomenon of ageing. A key aspect of his research focuses on finding sustainable solutions to maintain the health of these important pollinators.

With both parents working in the field, Rueppell was exposed to biology from a young age. Though initially intent on studying birds, Rueppell was drawn to the research of social insects by a professor in his undergraduate degree.

Rueppell’s research with honey bees is grounded in social biology theory, which examines the link between social organization and behaviours, and genetics.

“It’s an area of biology that has a relatively well-established theory behind it, but it also offers opportunities to do experiments and observations and empirical work, and this combination between theory and practical work attracted me,” Rueppell said.

“Social insects are really special because of their integrated colonies that function almost like a superorganism. They function as a unit where individuals are almost like the cells in our body contributing to one bigger outcome, and that’s the functioning of the colony.”

“It turns out that honey bees and other social insects are very good models because they are extremely plastic in their ageing rates,” Rueppell explained. “Some individuals age much faster than others even though they live in the same colony, they have the same genome, and so forth. The question is, how do they manage to age much slower in some instances?”

Honey bee health is also a research priority for Rueppell, due to their important role in pollinating our food production, as well as the functioning of ecosystems as a whole. Researching viruses, parasites, and other stressors on honey bees constitutes the bulk of Rueppell’s work.

“As humans are transforming our environment more and more through agriculture and other practices, we have to be careful to preserve the functionality of the ecosystem,” Rueppell said.

However, preserving plant and pollinator systems can be tricky due to a symbiotic relationship: flowers depend on pollinating insects to transport their pollen, while pollinating insects depend on pollen as a food source. This balance between plants and pollinators is also essential to food production to pollinate staple food crops, like blueberries and strawberries.

“If one partner falls away, then potentially the other partner in the symbioses will suffer, and potentially go extinct,” Rueppell explained.

But Rueppell says that it isn’t the bee populations that are diminishing, but rather their caretakers.

“The honey bee is not going to go extinct because it is so intensely managed, and a lot of beekeepers are putting a lot of effort into keeping their populations up,” Rueppell explained. “But, we have to be somewhat worried about the extinction of the beekeeper.”

Rueppell hopes his research into honey bee health will lead to an improvement in the beekeeping sector. Though Alberta’s landscape and long summer days make for ideal honey-producing conditions, beekeepers must contend with between 20 and 40 per cent of their honey bee colonies dying each year, which can be expensive to replace.

“I could never understand how so many people work on honey bees and still have new questions, and now I can’t understand how I didn’t see that many questions,” Rueppell exclaimed. “That’s what I love about it – to see how one experiment or answer opens up so many new and fascinating things that we can still learn about bees and insects.”

Rueppell is currently recruiting students of all levels to help him continue to ask questions about honey bees in his new lab at the U of A.

“I think that’s part of the fun of academic research, you work with people from very diverse and different backgrounds, and that’s what I’m trying to do in my lab as well.”

“I’m really happy to be here, and it feels like a great opportunity to start a new lab in such a great university.”

New Researcher at Univ. of Alberta