By: The Bee Informed Partnership

Our survey also asked what level of Winter loss would be acceptable by beekeepers. Interestingly, this revealed an increase from 20.6% last year to 22.2% this year, which is much greater than the 11-year average of 17%. This increased acceptable loss may indicate that beekeepers are more realistic or pragmatic in their expectations of colony losses. Even with a higher acceptable loss, sixty-two percent of responding beekeepers lost more colonies than the level deemed acceptable.

We note that loss rate for each period was estimated by identifying the total number of at-risk-colonies that died, and that annual loss rate was not estimated by summing the individual Summer and Winter loss rates. This year’s state-specific loss rates will be added to previous years’ results on the BIP website shortly (https://bip2.beeinformed.org/loss-map/). 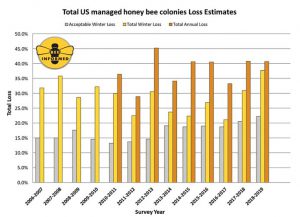