Through Houston-based nonprofit Hives for Heroes, veterans trade their uniforms for bee suits, work to save pollinators, and learn mindfulness. 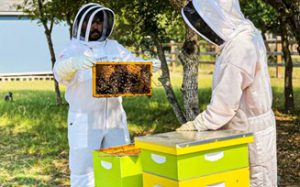 On a warm summer morning, Michael Moore and Charlie McMaster don their protective suits and veils to inspect the health of Moore’s four new beehives. The white boxes sit near the fence line of Moore’s fifteen acres outside Evant, a tiny hamlet northwest of Fort Hood. Here, on this undeveloped land, Moore plans to launch a second career in agriculture after his imminent retirement from the Army. A steady breeze sweeps across the treeless slope until it reaches a cluster of pecan trees near the hives. Overhead, flat-bottomed clouds stand motionless in the sky.

The pair approaches one hive, and McMaster, a retired Army colonel and a director for the Texas Beekeepers Association, removes its cover. With a gloved hand, he gently sets aside a Swiffer pad—a DIY defense against destructive hive beetles—and lifts one of the frames to reveal a bulge of golden comb. The bees have begun “drawing out,” depositing wax on the frame’s foundation and building it into cells. In the center of the frame, those hexagonal cells are a rich cinnamon color; they’re what beekeepers call capped brood, cells holding eggs laid by the queen and sealed with a top layer of wax. Nearby, golden cells hold capped honey. At the bottom, a clutch of cells are filled with fat white larvae.

Moore, a trim man with a narrow, tanned face, peers into the box. Behind his veil, his gaze is intense, an affect magnified by horn-rimmed spectacles. A novice beekeeper, he knows enough to interpret the capped brood and larvae as good signs. “So the queen is in there somewhere.”

A hum thickens the air. Alert to the intruders, bees begin to emerge, darting and whirring as McMaster and Moore work. A few curious explorers land on their suits and veils, but the men ignore them. They move slowly and methodically from hive to hive, assessing each for evidence that the queen is still laying and that pests haven’t invaded. The two have been paired together through Hives for Heroes, a Houston-based nonprofit that helps veterans take up beekeeping by matching them with experienced mentors. The project tackles two disparate problems: the mental health risks that veterans face when they separate from service and the declining population of honeybees. Launched in 2018 by Marine Corps veteran Steve Jimenez, a Houstonian whose rough transition back to civilian life was transformed by beekeeping, the project has expanded to every state and matched more than 1,200 veterans—“newbees,” in the group’s parlance—with beekeeping mentors. About a quarter are in Texas, tending hives in cities, including San Antonio and Houston, and in smaller towns, such as Stephenville and Blue, near Elgin. Another 276 newbee veterans have signed up and await mentors in their areas.

To read the complete article go to; These Veterans Have Found a Post-Service Mission: Beekeeping (texasmonthly.com)

We are here to share current happenings in the bee industry. Bee Culture gathers and shares articles published by outside sources. For more information about this specific article, please visit the original publish source: These Veterans Have Found a Post-Service Mission: Beekeeping (texasmonthly.com)