“Take a deep, calming breath and in your mind’s eye, image if you will, being led into a small clearing.

A gentle breeze is blowing in the trees, and the sun warms your skin. Ahead lies a quaint, cozy, tiny house. As you approach, you see a roped off yard with pollen laden honey bees seeming to fly in and out of the lower wall. You are drawn to a gathering of miniature stepping stumps that lead to a door. Pulling it open, the warm scent of fresh wood mixed with the sweet aroma of honey and beeswax greets your nose. The interior is bathed in sunlight from a large south facing window. Below the window is a chest-high cozy bench cushioned by a blanket and pillows at either end. The antique wicker chair invites you to sit and remove your shoes. A nap is sounding more and more inviting. You step onto a handmade wooden stool and climb up onto the bench and lie down. Now that you’ve settled in, your ears are greeted by a soothing sound not unlike a gentle tide. You suddenly realize it is bees under the bench. The deep thrumming sound resonates through your body. And could that actually be micro vibrations you almost sense rather than feel. Whatever it is, you find the scents, sounds, and feelings so relaxing your eyes drift closed. Slipping off to sleep you wonder, “What exactly is this enchanting place? Why do I feel so deeply relaxed? Who built this here?”

Most parents know that allowing a child to have a pet of their own often means that the furry friend may end up theirs for a while when the child leaves the nest for the first time. Whether it is off to college, an apartment and full time job, or a gap year of traveling, pets are often not part of that plan. However, not too many parents get left looking after thousands of animals. That is unless their child happened to be a beekeeper.  Luckily for me, I started the hobby with my father, and he had made it his own as well. Of course the liquid gold honey he became accustomed to helped to sweeten (pun intended) the deal of doing the work on his own!

For years after I left the nest, my father continued to tend his bees, learn the art of beekeeping, and enjoy a very solid flow of honey. Although I did none of the work, a jar of honey always seemed to make it into my home – even when I lived across the country! And then my father retired from his paying job as an educator of 30 + years. He is a man with a drive to learn, work, and share his knowledge with others. No taking it easy for him. So, when retirement meant relocating over 350 miles north to the Upper Peninsula of Michigan, his bees went with him. What he found were some interesting new challenges to spark his imagination and kick his interest in bees up a notch.

What followed is quite a list of experiences that I only highlight in order to get to the newest. I’ll give you a little spoiler: it’s an expansion to our current concept of apitherapy here in the United States. Let’s start at the beginning.  After one rather devastating episode, my father learned that electric fencing is a must if you want to keep bees in bear country. He also learned that the short season and long harsh winters of Skandia, Michigan, meant new overwintering techniques if he wanted to avoid 100% winter hive losses. Once he figured these things out, he shared them via videos with other beekeepers on his new website U.P. Michigan Bees. He learned that in his new location, with fewer acres of open farmland full of clover and buckwheat, his bees depended on the “bee pasture” along the roadsides and in yards that was getting mowed too often and too early in the season. He now shares a bee pasture preservation message with people far and wide when he presents at schools, bee conferences, and other events in the hopes that awareness will bring change in behavior. It was the spring of 2014, at the Michigan Beekeepers Association Conference, that he learned of a centuries old apitherapy structure.

At this conference, Anne Marie Fauvel presented a talk on her trip with Therese McCarthy to Apimodia in Kiev, Ukraine. From her talk, my father learned about the idea of creating an enclosed space over hives in which a person derived therapeutic effects from their nearness to the bees. When my dad shared this information with me, I was entirely intrigued. There was only one problem…information about these apitherapy houses was in short supply. So, the idea went to my father’s subconscious where it could be recalled at a later date.

After months of pondering, in the Winter of 2014, my father decided he would simply have to make his own version of the Ukranian apitherapy house. Having successfully built a number of structures over the years from woods harvested on his own property, he knew he would do the same with this project. Planning commenced. His determination brought out my own, and in the Spring of 2015 I was successful in my online search for information. Granted it wasn’t a lot, but I found some loosely translated information from the Ukraine and a video out of Canada where someone else had created one of these apitherapy houses. From there it was just a matter of time until the weather permitted a start on the physical structure. 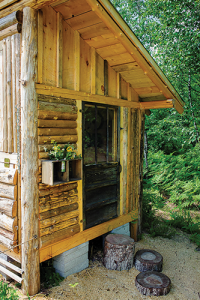 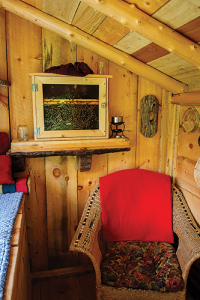 Ground breaking was April 20, 2015, although four handsome handmade Nucs (decided upon to make tending them easier) were constructed earlier in the month for later use in the “Hive House.” Yes, Hive House was the name we finally settled on as any time we used apitherapy in the description those we were talking to immediately thought we were talking about them getting stung. Not the pleasant and relaxing connotation we wanted to go along with this new venture! The Hive House quickly began to take shape with the help of my mother and his young grandchildren. The logs were cut and milled on the property, carried to the carefully chosen building site (close to the bee yard, backed by woods, and facing a small open field), and assembled from the plan in my father’s head. This worked out well most of the time and “mistakes” just meant innovative solutions. 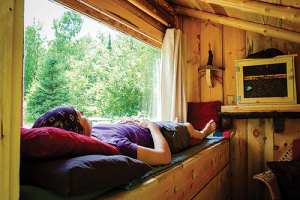 At first he planned to put a small window on the wall opposite the door. As the building progressed, he envisioned lying on the bench on a warm summer’s day and realized that he not only wanted to hear and smell the bees below, he wanted to watch them go about their fascinating work. The solution was a home-made observation hive with an entrance to the outside. Since he was milling his own lumber, he decided to highlight the various types of trees growing on the property.  Cherry, spalted white birch, popple, spruce, balsam, maple and hemlock make up the ceiling above the sleeping bench. As with the rest of the buildings on the property, his desire was to have things serve more than one purpose.  So, in went a comfy chair to create a spot for someone to relax with a cup of coffee or a glass of wine.  Top off the décor with pillows and a handmade afghan to cushion the sleeping bench, and on May 17th, less than a month after the initial groundbreaking, the Hive House was complete. Two days later it received its first snow with a late season storm! Now it was time for the bees. 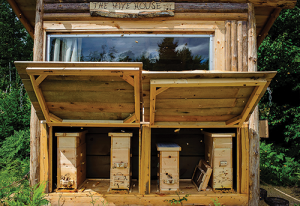 The Hive House was finally up and buzzing by mid June of 2015. It’s official reveal was Saturday, June 20th at the annual Meeting and Bee Social of the Superior Beekeeping Club. Along with the 40 + members who came to participate in hive inspections, enjoy a mead tasting, and socialize during the potluck, the group hosted a special guest, Terry Toland, President of the Michigan Bee Association. The buzz generated here only continued with the publishing of a short video explaining the Hive House on the UP Michigan Bees website, and finally the announcement of it’s existence at the July, Heartland Apiculture Society Conference held at Albion College in Michigan. The excitement generated there has already led to a special trip by one gentleman to take pictures of the Hive House and request by many for the plans.

Now all that is left to do is for the creator, his family, and his visitors to enjoy the many benefits of this “new” old form of apitherapy. Remember that imaginary trip you took at the beginning of this story? Well, all those scents, sounds, and vibrations are said to have a healing effect on emotional, physical, and psychological ills that many of us carry around. While no promise can be made about the claims to benefit pulmonary and respiratory function, blood composition and the body’s immunity (among many others) we do feel confident that, at the very least, peaceful sleep in the Hive House allows for the deep rest and rejuvenation that helps counter the stresses of our modern, fast-paced life. It sure is a great place to enjoy a glass of local mead!

My father and I would very much like to know of any other such apitherapy houses in the United States that are based on the Ukranian model. So far, our search for others has been unsuccessful.  Let us know at www.upbees.weebly.com if you are aware of others in existence.

Photos by David A. Vore