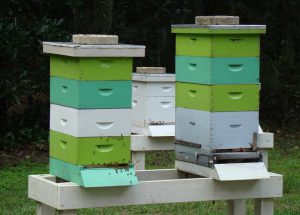 The classic wooden hive box used by beekeepers worldwide, first designed in the 1800s, is prone to temperature swings, according to a study by researchers at Queensland University of Technology in Australia. That’s bad news for the honey bees inside, who must expend energy to maintain their favored internal hive temperature. (Photo by Rebekah D. Wallace, University of Georgia, Bugwood.org)

European honey bees (Apis mellifera) suffer from an astonishing array of problems—Varroa mites, hive beetles, foulbrood, chalkbrood, stonebrood, deformed wing virus, 20-plus other viruses, poor diet, predation, pesticide exposure—it’s death by a thousand cuts. A new paper in the Journal of Economic Entomology adds another knife: the typical house beekeepers provide for honey bees. It’s a wooden box based on a nineteenth century design that leaks and gains heat just like you’d expect it would. And occasionally someone comes along and takes away part of the insulation (honey). Honey bees just can’t win.

Daniel Cook is a Ph.D. candidate at Queensland University of Technology in Australia and lead author on the study,  published in March in the Journal of Economic Entomology, which examined the thermal dynamics of the traditional managed honey bee hive box. Cook says via email that the commonly used wooden hive boxes “are designed for the human first, with the bee a vague afterthought.”

While studying industrial design as an undergraduate, Cook looked at how to build a better hive box. “I had a small bee yard peppered with sensors to determine how the bee hive itself behaves thermally,” he says. “From there, the design of the hive screamed of thermal inefficiencies.” Cook and colleagues’ research on the thermal properties of typical hive boxes quantifies their leakiness and highlights the potential impacts on the bees and their keepers.

Honey bees are persnickety about the temperature of their home. It needs to be between 34.5 and 35.5 degrees Celsius (approximately 94-96 degreesFahrenheit) or it adversely impacts the brood (eggs, larvae, and pupae), so the bees work to maintain that ideal temperature in various ways, such as fanning with their wings to cool or shivering to warm.

In their study, the researchers calculated the heat loss of the boxes along with the thermal impact of certain beekeeping practices. All the experiments looked at the heat loss only from the boxes and their non-living components (honey, wax, etc.). “The reason I left bees out of this study was that there are far too many behaviours that occur in the hive for thermoregulation,” Cook says. “It is not an easily applicable constant!”

The authors compared the heat loss of a standard wooden box to a polystyrene model where the internal temperature was a honey bee-idyllic 35 C and the outside temp was 25 C. The polystyrene version’s heat loss was 23 percent of the amount lost by the wooden box. Cook notes that about half the heat loss is through the lid; therefore, “a well insulated lid could reduce stress in the hive and increase forager availability.”