The National Honey Show grew from origins in 1921 of a joint honey show held by two county associations in south east England, Kent and Surrey.  It was first held at the famous Crystal Palace. 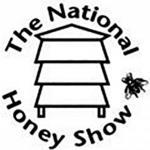 By 1932 the show was held regularly each autumn with the primary objectives to benefit the community at large by encouraging beekeeping, pollination, and so the production of fruit, seeds, vegetables, flowers and honey.

Secondary objectives covered any show or exhibition in connection with apiculture, and their awards and prizes, closer association of beekeepers and beekeeping associations, and to further education, lectures, classes, and examinations to advance the cause of apiculture.

Even before its first show, the trustees of Crystal Palace presented a very splendid trophy which featured on the cover of all schedules up to 1935.  Associations originally competed for the cup in a class for 12 sections, 12 jars each of light, medium, dark and granulated honey, and 1 lb beeswax is still awarded today. These days individuals compete for the cup in a class for nine jars and one shallow comb.

Over the years since then, the National Honey Show has been held almost every year, excepting a few years during the war, and at several different venues in south, fairly central, and west London. The requirement for an area for competitive exhibits, lecture rooms, a trade hall plus more recently workshop classrooms, as well as office and catering facilities, good access, and parking, has been a considerable challenge as the show has grown. Staging plus other display equipment has to be stored and transported to and from the show, and as the show is run entirely by volunteers, a reliable, experienced and willing team local to the venue is essential.

The show struggled financially in its early years, but now has an income from bequests, membership, show entry fees and support from the trade hall, plus occasional sponsorship from various organisations and charities. However each move to a larger venue has generated a considerable hike in costs, the latest in 2016 to Sandown Park Racecourse has brought all the aspects of the show under one roof and proved very popular.

By: Kim Flottum On the 10th of August we’re holding our second Pollinator Day here at the Root Company’s Pollinator Meadow, behind our…