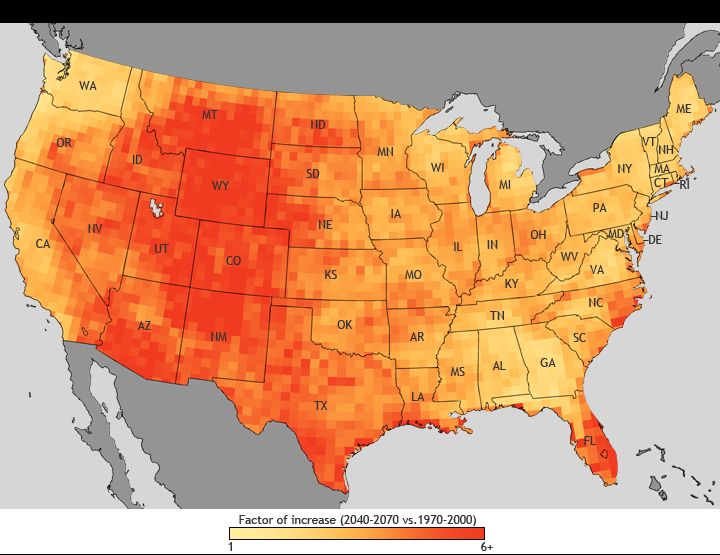 U.S. residents’ exposure to extreme heat could increase four- to six-fold by mid-century, due to both a warming climate and a population that’s growing especially fast in the hottest regions of the country.

Extreme heat kills more people in the U.S. than any other weather-related event, and scientists generally expect the number of deadly heat waves to increase as the climate warms.

A new study by researchers at the National Center for Atmospheric Research (NCAR) and the City University of New York (CUNY) finds that the overall exposure of Americans to these future heat waves would be vastly underestimated if the role of population changes were ignored.

“Both population change and climate change matter,” says NCAR scientist Brian O’Neill, one of the study’s co-authors. “If you want to know how heat waves will affect health in the future, you have to consider both.”

The study, published in the journal Nature Climate Change, finds that the overall exposure of Americans to these future heat waves would be vastly underestimated if the role of population changes were ignored.

The total number of people exposed to extreme heat is expected to increase the most in cities across the country’s southern reaches, including Atlanta, Charlotte, Dallas, Houston, Oklahoma City, Phoenix, Tampa, and San Antonio.

For the study, funded by the National Science Foundation and the U.S. Department of Energy, the research team used 11 different high-resolution simulations of future temperatures across the U.S. between 2041 and 2070, assuming no major reductions in greenhouse gas emissions. The simulations were produced with a suite of global and regional climate models as part of the North American Regional Climate Change Assessment Program.

Using a newly developed demographic model, the scientists also studied how the U.S. population is expected to grow and shift regionally during the same time period, assuming current migration trends within the country continue.

Total exposure to extreme heat was calculated in “person-days” by multiplying the number of days when the temperature is expected to hit at least 95° F by the number of people who are projected to live in the areas where extreme heat is occurring.

“We asked, ‘Where are the people moving? Where are the climate hot spots? How do those two things interact?’ ” says NCAR scientist Linda Mearns, also a study co-author.

“When we looked at the country as a whole, we found that each factor had relatively equal effect.”

In some areas of the country, climate change packs a bigger punch than population growth and vice versa.

In the U.S. Mountain region – defined by the Census Bureau as the area stretching from Montana and Idaho south to Arizona and New Mexico – the impact of a growing population significantly outstrips the impact of a warming climate.

The opposite is true in the South Atlantic region, encompassing the area from West Virginia and Maryland south through Florida.

The researchers say that regardless of the relative role that population or climate plays, some increase in total exposure to extreme heat is expected in every region of the continental U.S.

“Our study does not say how vulnerable or not people might be in the future,” O’Neill says. “We show that heat exposure will go up, but we don’t know how many of the people exposed will or won’t have air conditioners or easy access to public health centers, for example.”

Lead author Bryan Jones, a post-doctoral researcher at CUNY, says there has been much written regarding the potential impacts of climate change, particularly as they relate to physical climate extremes.

“However, it is how people experience these extremes that will ultimately shape the broader public perception of climate change,” Jones says.

The National Oceanic and Atmospheric Administration predicts punishing national heat will be more common and longer-lasting by the time today’s children are raising their own families. (NOAA graphic)