Deep into Gulf County an echo fills the trees and riverbank. A flash of black darts streak across the air.

Bullseye! The aviator strikes on a fresh snow-white blossom. As she shifts along the perimeter of the green ball, measuring the size of a BB, the honey bee extracts nectar.

Filled with elixir, the fieldworker flies her heart out back to the hive with a GPS that rivals drone aircraft. The deposit is liquid gold – one that is revered and sought out by honey connoisseurs worldwide.

A stone’s throw from Apalachicola’s Gibson Inn, Dan Tonsmeire launches his Whiteline boat from Ten Foot Hole into the Apalachicola River with a Florida State University film crew on board.

Tonsmeire, the riverkeeper, provides a running “Waterway 101” brief as he navigates. After the U.S. Army Corps of Engineers completed the last of five federal dams in Georgia in 1975, increasing stress caused by 10 privately-funded dams already in operation along the Chattahoochee and Flint Rivers, water flow diminished, and the Apalachicola River began fighting for its survival.

Manmade dams started to further manipulate water flow in response to Metro Atlanta’s frenzied buildup and expanding agricultural interests in southwest Georgia. Operations in Georgia were further tweaked in 1983, which held back additional water resources to the rivers, and dried up the floodplain even more along the Apalachicola River Basin.

As the Whiteline passes Brothers River, a tributary of the Apalachicola, tupelo blooms are spread out as far as the eye can see off the starboard side. Tonsmeire explains, “Wewa southward to Sumatra is the motherlode of the world’s white Ogeechee tupelo.” While it has many imitators, the only certified tupelo honey in the world – arguably the finest honey in the world – is produced in this area of the Florida Apalachicola River Basin, thanks to the Ogeechee tupelo.

Numbers from the 2006 U.S. Geological Survey (USGS) Report, “Water-Level Decline in the Apalachicola River Florida from 1954 to 2004 and Effects on Floodplain Habitats,” are compelling to the Florida-Georgia showdown. Citing this report Tonsmeire says, “We’ve lost 3.7 million white Ogeechee tupelo trees from reduction in water flow to our floodplain. This is a serious issue that has been going on for 30 years. Yet, Georgia has wanted to put its hands over its eyes and pretend that this water crisis never existed.” 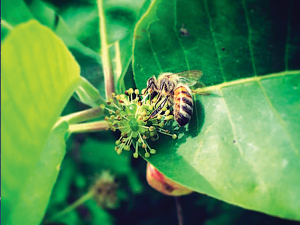 According to the U.S. Geological Survey Scientific Investigations Report 2008-5062 “Drier Forest Composition Associated With Hydrologic Change in the Apalachicola River Floodplain, Florida”, by Melanie R. Darst and Helen M. Light, from 1976 to 2004, “Ogeechee tupelo, the species valuable to the tupelo honey industry, has declined in number of trees by at least 44 percent.”

Water is the lifeblood of the Apalachicola River Basin. “It is the driver for the productivity of the river, the flood plain, the bay, and the eastern Gulf,” says Tonsmeire. “Beekeepers in this area are hanging on because they love what that they’re doing. It’s a tradition. One that they know and love. Yet, like the oyster harvesters, they see it disappearing before their eyes.”

Tonsmeire notes that small operator stands once vibrant around Apalachicola, Bristol, Blountstown, Carrabelle, Eastport, and Wewahitchka just 10 years ago have all disappeared. “Now the imposters are showing up. If the honey crystalizes, you ain’t got the real stuff!”

True tupelo has a 16 to 18 percent moisture level. Always raw, it also contains the sugar levulose. The presence of levulose and a lower moisture level ensure that tupelo does not crystalize. This non-crystallization, combined with a smooth and rich taste, make tupelo the Rolls Royce of American honeys.

A Disappearing Way Of Life

In 1923, Austrian scientist Rudolf Steiner predicted that in 80 to 100 years honey bees would collapse from the face of the earth. His prediction, based on the use of chemical and artificial fertilizers, seem true with Colony Collapse Disorder (CCD) – an occurrence in which bees are now disappearing in mass numbers from hives with no clear explanation. CCD and the lack of water flow threaten not only one of the world’s most sacred resources – white Ogeechee tupelo honey – but a way of life for a small Florida town.

Supplies of tupelo honey in the Apalachicola River Basin are dramatically down, and harvest numbers began dropping about five years ago – around the same time the legal fight began over water rights.

Buddy Parker is a third generation Gulf County beekeeper. As a boy, he watched as his father and other locals stood for hours harvesting honey from eight-and 10-foot scaffolds in the 1960s. Springtime was a tupelo rite of passage along the water’s edge.

A good year’s harvest with Buddy’s father and grandfather yielded an average of 100 pounds per hive. Today, Parker reports a five-year yield of 27 pounds per hive. Parker brought in 42,000 pounds of tupelo in 2016, compared to last year’s yield of only 455 pounds.

In addition to lower yields, today Parker and locals watch outsiders increasingly tread on sacred tupelo territory. Parker swats dirt from his veil, splattered with specks of beeswax, “Back in the day beekeepers respected the two-mile limit. Now we got more beekeepers than you can shake a stick at!”

Seven or eight years ago, George Watkins was riding a tupelo high. The 25-year veteran and second-generation Apalachicola beekeeper was featured in Garden & Gun and highlighted on the PBS series America’s Heartland and Culinary Travels with Dave Eckert.

Harvesting prime virgin terrain along Forbes Island, the apiarist supplied the local Piggly Wiggly grocery store with 2,500 pounds of tupelo a year. Customer call-ins numbered in the thousands, and requests for his honey were fulfilled as far away as Europe and Central America. Decades earlier, Watkins had worked as a consultant for the tupelo industry movie Ulee’s Gold. 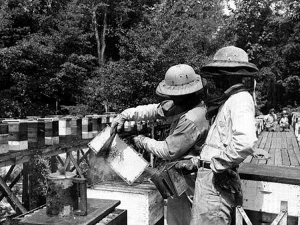 Beekeepers at work in the 1960s. (photo, FL State Archives)

That was then. This is now. “In a quarter century I would not believe what I’m seeing today,” says Watkins. “The trend started five years ago. We’re on a downhill slide. The trees are not producing. About the same time that the oysters began vanishing, the tupelo starting dropping below accepted levels.”

What Watkins once called “honey in the bank” is now becoming a hardship for beekeepers. GMOs, manmade chemicals, and demand for cheaper and faster farm produce are reasons cited by Watkins. “Pesticides and GMOs are what the French are blaming it on, too,” he says.

Colony collapse is a significant factor. International studies indicate that there may be a link between radiation from cell phones and towers that are contributing to CCD, and Watkins is a proponent of the theory. “I’ve seen a strong hive disappear within a month. Cell phones are a multi-billion dollar industry. Nobody can live today without computers and cell towers,” he says.

The liquid gold alchemist says with a drop in his voice, “This whole occurrence might be man-made and it might be too late.”

Festival of the bees

The third Saturday in May, the town of Wewahitchka, known as “Wewa” swells from just under 2,000 to more than 6,000 people. Now in its fifth decade, the Tupelo Honey Festival is the South’s celebration of all things honey.

Truck drivers, nurses, and lawyers stop by to sample the new yields. Among the crowd are Ingrid Courtney, a nurse originally from Montreal, now living in nearby Panama City, and Harry Haldeman. Both tout the health benefits of tupelo.

Beekeeper Jeremy Miles, who is employed as a lineman, projects his voice over the noise of the crowd. “Outsiders are takin’ over,” says Miles with a frown. From 2009 to 2014 Miles brought in a yearly average of six drums of tupelo. The 2016 harvest yielded zero. In 2017, Cypress Creek Apiaries did not produce a single drum. “What can we do? We’re just broke beekeepers,” he says squinting in the sun.

Harvest time and a future of uncertainty

The last two to three weeks in April are tupelo time. Beekeepers never return calls. The world shuts down – their only universe is the female honeybee and America’s most aromatic blossom.

“We beekeepers are on it!” says Buddy Parker. The minute white tupelo blooms, hives are stripped of other honey. This ensures that the new crop is as pure as possible. Timing is critical to producing the best tupelo.

Within these same rivers and swamps of the largest tupelo forest in the world beekeepers map out spots for this spring’s harvest. As they seek out prized tupelo blossoms, Parker and other beekeepers hope to make this season a hymn to the honey bee.

Reprinted with Permission From The

Off The Map Expeditions