Safe For Bees And Beekeepers?

As a beekeeper I used to make the mistake of blaming farmers and chemical researchers for our pesticide problems. However, over time I have learned that the real culprits for our pesticide woes are the pesticide manufacturers who are focused on profits over safety, and a fatally flawed government regulatory system.

Farmers put their trust in our governmental pesticide regulatory system and the salesman that pitch pesticides to them. The same is generally true when it comes to pesticide researchers. Sure there are the occasional bad actors that lie and cheat when it comes to chemical testing, but most testing labs and those who run them are above board, are committed, sincere folks who are doing their best to do things right within a system that can never determine true safety. Our pesticide regulatory system is designed in such a way that it guarantees no pesticide makes it to market with the complete testing and evaluation needed to ensure absolute safety when used according to the label simply because practically, it is impossible to do so. Instead, we get pesticide approval based upon a bunch of data that focuses on toxicity [e.g. the acute contact lethal dose that kills 50% (LD50), Residual Testing that kills no more than 25% (RT25), the Level of Concern (LOC) which represents the “acceptable” loss, etc.] all of which may appear to be a thorough evaluation but it isn’t.

It is commonly argued that large amounts of testing goes into each product approval, but this point ignores the fact that much more testing than is currently required, would actually be needed before we can really know with certainty that a product is safe to use as directed. (see my article in Bee Culture February 2018).

Instead of demanding true safety, we accept a compromise of what is economically achievable and extrapolate to infer safety, rather than do what would be necessary in order to actually prove safety. The situation I describe is proven out by our history which is littered with chemical pesticides that were deemed “safe” until they caused so much harm, death and misery that they were subsequently removed from the marketplace. Most people are not aware of this situation, or simply choose to forget, and instead put way too much faith in our flawed pesticide regulatory process and the science that that is used to justify claims of safety. 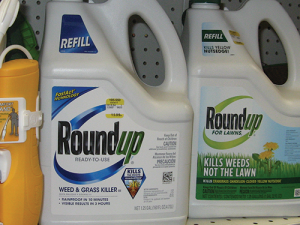 One of the reasons for Roundup’s commercial success is its alleged low toxicity for humans and animals. In actual fact, even before the International Agency for Research on Cancer (IARC) classified the product as ‘probably carcinogenic,’ many independent studies had demonstrated the harm it caused to human and animal health: neurotoxicity, DNA damage, disorders of the endocrine system and so on. Neither Roundup nor other glyphosate-based herbicides have been tested long enough to actually prove their safety for human or honey bee health.

While many beekeepers are focused on neonicotinoids, one pesticide that has not received enough attention in beekeeping circles is Roundup and its active ingredient glyphosate. Glyphosate in the form of Roundup is the most widely used herbicide in the world. (Benbrook 2016) Well-meaning researchers, regulators, beekeepers and members of the general public often mention glyphosate as an example of a pesticide that is mistakenly blamed as being unsafe. On closer inspection however, we see that the assertion that Roundup is safe is not supported by the evidence which continues to mount.

Part of the explanation offered that there is insufficient evidence to state glyphosate is carcinogenic is the fact that we humans do not absorb the chemical easily and we excrete it without metabolizing it. While this is true for glyphosate, the active ingredient in the herbicide Roundup, it is NOT true for the final formulation of Roundup that is sold to farmers and consumers world-wide, and this is what is creating confusion.

This distinction is important since researchers have long established that chemicals when combined can change and react differently. In fact, the synergistic properties of chemicals form the basis of chemistry. What we are seeing is growing evidence that strongly suggests that the 49.8% of inert ingredients that comprise the Roundup formulation, and includes 13% surfactants along with other chemicals, make the glyphosate it contains much more toxic and allows it to be absorbed much easier.

While there are plenty of studies that indicate glyphosate is not acutely toxic to honey bees, research published in the Journal of Experimental Biology has shown that “honeybees exposure to levels of glyphosate commonly found in agricultural settings (read: applied as Roundup) impairs the cognitive capacities needed to retrieve and integrate spatial information for a successful return to the hive.” (Balbuena et. al., 2015) This study also cites other studies that have found glyphosate can harm earthworms, fresh water snails, amphibians, and amphipods.

These findings have been supported by additional research which found that “GLY at concentrations found in agro-ecosystems as a result of standard spraying can reduce sensitivity to nectar reward and impair associative learning in honey bees.” (Herbert et.al., 2014)

These studies point to a common occurrence in the world of pesticides, that the focus on toxicity by our pesticide regulatory system overlooks the long-term and sub-lethal impacts that can weaken bees without killing them outright and make them more vulnerable to nutritional stress, pathogens and pests.

When it comes to the harmful effects of Roundup on human health, the evidence is much stronger and clearer. Last year, 17 of the world’s top cancer researchers unanimously voted to elevate the cancer profile of glyphosate on behalf of the World Health Organization. The WHO’s International Agency for Research on Cancer (IARC) now classifies the weed-killer as “probably carcinogenic to humans” after the panel of experts reviewed all of the publicly available research.

The IARC report concluded that the cancers most associated with glyphosate exposure through Roundup are non-Hodgkin lymphoma and other hematopoietic cancers, including lymphocytic lymphoma/chronic lymphocytic leukemia, B-cell lymphoma and multiple myeloma. The report also found that glyphosate exposure caused DNA and chromosomal damage in human cells, as well as genotoxic, hormonal and enzymatic effects in mammals. Since the action by the WHO, the state of California has listed glyphosate as a known human carcinogen under its Prop 65 law, despite court action by Monsanto the manufacturer of Roundup.

In September 2016, the U.S. EPA office of pesticide programs published a “Glyphosate Issue Paper: Evaluation of Carcinogenic Potential” that stated glyphosate was not a cancer hazard. It is important to note that in this paper, the EPA reviewed studies that looked at the health impacts of the chemical glyphosate in isolation, while the IARC based their classification of glyphosate as “probably carcinogenic to humans” on the final formulation of Roundup.

There are also documents that have been unsealed by a federal judge that suggest Monsanto worked directly with federal regulators to hide the health risks of and manipulate the science supporting the safety of Roundup. The documents reveal that Monsanto pressured EPA officials to not publicly release information on the cancer risks of glyphosate in Roundup. The company also ghostwrote research for the EPA and worked with a senior official at the agency to quash a federal review of the chemical. (Hakim 2017)

Meanwhile, industry and government regulators confuse the issue in the minds of many by referring to the studies that indicate the active ingredient, glyphosate, as relatively safe, while ignoring the damning evidence of the complete Roundup formulation sold in the marketplace. It has become a common practice for industries that rely on harmful products for their profits, to manufacture doubt in people’s minds about the potential harm of their wares as part of an overall strategy to keep sales flowing for as long as possible.

The clear indications of potential harm that the studies on Roundup suggest become all the more alarming with the recent announcement by the U.S. Food and Drug Administration that FDA researchers found glyphosate residues of 653 parts per billion (ppb) in honey samples – an amount that’s more than 10 times the European limit of 50 ppb.

Other honey samples tested contained residues ranging from 20 ppb to 123 ppb. Sadly, in an internal email obtained through a Freedom of Information Act request, another FDA researcher complained that no honey (even “organic mountain honey”) appeared to be free of glyphosate, as reported by The Huffington Post: “It is difficult to find blank honey that does not contain residue. I collect about 10 samples of honey in the market and they all contain glyphosate.”

The situation is similar for most of the grain grown in the U.S. It has become common for farmers to use Roundup to kill and dry down crops immediately prior to harvesting in order to reduce crop dry-off time and increase profitability. As a result the levels of glyphosate residue found in wheat, soy and other crops grown with Roundup has increased tremendously. Testing has found Glyphosate residues in 93% of the 131 urine samples from Americans tested at an average level of 3.096 parts per billion (PPB). Children had the highest levels with an average of 3.586 PPB. (Adams, et al. 2016) Unfortunately, most consumers are not aware of the glyphosate that is appearing in their food at higher and higher rates.

Earlier this year Monsanto appeared in court to defend Roundup against charges that it causes cancer. The case Dewayne Johnson v. Monsanto hinged on the fact that Mr. Johnson, who used Roundup almost daily in his job, contracted non-Hodgkin lymphoma. In August a jury looked at all the evidence and found that Monsanto was not only guilty of making and selling the product that caused Mr. Johnson’s cancer, but they also found clear indication that the company knew its product could cause cancer and that the company intentionally hid that information from Johnson and the public. In other words, they knew what they were doing was wrong, but they continued with reckless disregard for human life. Monsanto was fined $289 million as a result of its actions.

Leaving out pertinent information and not telling the whole truth is the equivalent of lying. Many people get away with this form of deception due to the extreme difficulty of proving that an omission was intentional and not simply a matter of ignorance. In Mr. Johnson’s case, the jury had enough evidence to see through the deception and justice was served. Keep all this in mind the next time somebody says the glyphosate is safe, or before deciding to use Roundup to control unwanted plants, like poison ivy, in the bee yard.