Let The Sonenshine In: New Ways To Control Mites

Efforts to control Varroa mites are expanding at the USDA-ARS Bee Research Lab, in part due to a lucky break. Many students follow their Professors to new places when jobs change but it is rare for a Professor to tag along with his student.  Professor Daniel Sonenshine’s excellent PhD. student Noble Egekwu was recruited by the Bee Lab’s Dr. Steven Cook to begin postdoctoral studies on the impacts of pesticides and mites on honey bees. While the paperwork unfolded for that move, Sonenshine had plenty of time to consider a move at the same time.  Following his retirement from Old Dominion University in 2002 after 40+ years, Sonenshine maintained a very active research program as an emeritus professor there. He has, in fact, received more grants after retiring than while a full-time professor and has continued to make great advances in tick biology and control. Tempted by the chance to make an impact on an entirely different problem, he let go of his University and active tick work to join the hunt for controls against bee mites. It did not hurt that Dr. Sonenshine had strong ties in Maryland and that he and his wife were open to a new venture closer to grandkids and family. As Sonenshine says, he did not plan this, but when doors open and you see new ways to be of service you go through. 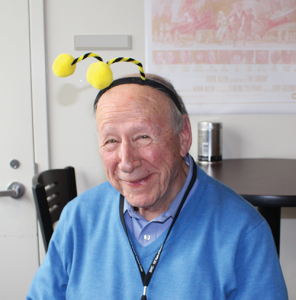 Prior to his recent arrival at the BRL, Sonenshine had never worked with Varroa mites although he does remember the name and story of these mites from his studies alongside tick and mite systematist George Wharton at Ohio State University. While he was late to the Varroa bandwagon, Sonenshine has had many noteworthy accomplishments studying the related ticks for over 50 years. For one, he collected the world’s knowledge of ticks into a key two-volume textbook (“The Biology of Ticks”, 1991 and 1993) and followed this with an expanded second addition co-edited with his friend and colleague Michael Roe.  Sonenshine’s research on dog ticks, deer ticks, and ‘soft’ ticks helped lay down many of the fundamentals of tick biology. He and his students described the key tick protein vitellogenin and then discovered the receptor for this protein, a ‘guide’ that helps the protein do it’s thing in the right places (eggs, for one). He then focused on the various ways amorous ticks meet up, leading to seven patents useful for controlling tick populations. In one success that only a scientist could brag about, he developed and attached a tick lure meant for the South end of cows headed North (https://link.springer.com/article/10.1007/BF00051475). This lure contains an aggregation pheromone for male ticks alongside an acaricide. Once attached (careful now!), this patch is successful in leading 95% of a cow’s ticks to their death under the cow’s tail. The location is key since it is one place not reachable by a grooming cow (unlike bees, cows rarely groom each other). More recently, he and his students designed and validated a ‘Tickbot’, a remote-controlled car designed to collect and kill ticks in nature (https://doi.org/10.1016/j.ttbdis.2014.11.004). After navigating with the help of an embedded wire for 60 minutes, the Tikbot effectively cleared mites from a public trail. Take that, Roomba! He continues to keep abreast of tick research and has helped lead efforts to sequence and understand the deer tick genome and to determine how these and other ticks recognize their animal hosts. In many ways, his breakthroughs in tick biology helped set the stage for some of the most promising new Varroa controls.

So what does Sonenshine have in mind for Varroa? A true scientists’ scientist, he arrives at the lab on most days of the week, dons his white lab coat and quietly gets to work. With Drs. Cook and Egekwu, along with University colleagues, he has been pursuing new ways to raise Varroa in the lab. This will enable better testing of control methods for mites, some of which are hard to work out in colonies. He has also focused on Varroa feeding behaviors, shedding light on how mites scrape and chew their bee hosts, feeding and transmitting deadly viruses. He continues to build on his past insights into mite love-talk and is complementing the lab skills of Egekwu and Cook by identifying key chemicals used by passionate or hungry mites. The plan is to use this knowledge to distract mites and lure them to their deaths. His former student Noble will leave soon to continue studies in the lab of Professor Jamie Ellis in Florida, but we are anticipating Dan will stay behind this time to help keep the local mite efforts going. Regardless, we should all be thankful for Sonenshine’s longtime dedication to the art of science and for continuing to try to make a difference, even as a volunteer.