Most teens favor dogs, cats, or maybe fish. Atreya Manaswi, a 9th grader from Orlando, Florida, prefers a very different creature: Apis mellifera, the honey bee. In fact, after two successful research projects, Atreya is determined to save the world’s honey bees from demise. “I think it can be easy to overlook such a small animal. But the truth is that we all need them,” claims Atreya. 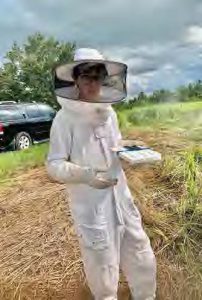 Manaswi can eloquently expound on how bees pollinate 80% of global crop supply and how important bees are to Earth’s ecosystems and biodiversity. “Bees are dying across the globe, and more attention needs to be drawn towards this crisis. We can’t afford to lose them,” he explains.

Captivated by honey bees, Atreya attended the South Florida Bee College where he met Dr. Jamie Ellis, a Professor at the University of Florida Honey Bee Research and Extension Laboratory who specializes in honey bee husbandry, ecology, and conservation.

Atreya conducted his first-year project on bee nutrition where he ran a choice-test on popular commercial protein (pollen) supplements to help commercial beekeepers determine a suitable replacement in times of pollen unavailability. His findings indicated that AP23 is the most preferred protein supplement brand for honey bees.

For his second-year project, he decided to tackle a devastating predator of the honey bee, the small hive beetle. Discovered in the U.S. only two decades ago, this pest species continues to spread across the globe. “One female hive beetle can deposit over 1000 to 2000 eggs upwards in a single lifetime,” notes Manaswi. Beetles wreak havoc once inside the hive and can destroy a colony in just a week’s time.
In his research, Manaswi tested organic agents to discover a new, affordable, and safe alternative to the current treatment options. The most common, EPA-approved chemical for in-hive treatment is coumaphos (organophosphate) that is sold in the form of CheckMite+ strips. Studies have shown that this compound is deadly to honey bees in certain exposure scenarios. Moreover, research has also confirmed chemical residues in beeswax, honey, propolis, and other hive products. 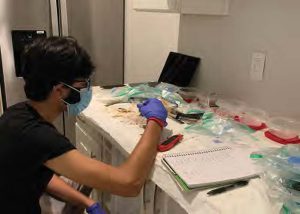 Well, this year, I actually couldn’t gain lab access due to the COVID-19 crisis, so I had to be creative. Using some household items I made a mini “home-lab” in my mother’s kitchen (though, she wasn’t too eager about it). This is where I did all my treatment formulation, beetle collections, and analysis.

In his experimentation, Atreya tested eight agents in beetle traps: apple cider vinegar with mineral oil (the natural currently used treatment), mango puree with boric acid, cantaloupe puree with boric acid, yeast, peanut oil, grapeseed oil, beer, and a control which had no treatment. Manaswi chose these agents because of their attractive odor compounds. The test was set up to determine which agent is most attractive to beetles in hive traps.

Through extensive testing and rigorous analysis, he discovered that beer was a clear winner. He concluded that beer was 33 times more effective for beetle treatment than apple cider vinegar. Manaswi claims his treatment is environmentally friendly and poses no adverse health risks to humans, wildlife populations, or bees. Beer provides cost benefits over the current chemical options, as well. It costs merely two cents for hive maintenance and a 12 pack of beer for five dollars is enough to treat over 215 whole hives.

Kenneth Griner, a Central Florida beekeeper, was extremely encouraging of Atreya’s research. “Mr. Griner was amiable and understanding. I was privileged to work with him. He even allowed me to run tests on 24 whole beehives! That’s over 1.2 million bees!” exclaimed Atreya.

Dr. Charles Stuhl, Ph.D., a Research Scientist at the USDA-ARS, Center for Medical and Veterinary Entomology, Gainesville, Florida mentored Atreya on his second-year project. “He educated me on how fatal hive beetles can be to a colony and informed me more about this ongoing global crisis,” stated Manaswi. Being a middle schooler, Atreya learned from Dr. Stuhl about academic research and how to present findings in a public setting.

Atreya soon came to realize the struggles of field work. “Last year, working in a lab, I was not exposed to the difficulties and harsh reality that beekeepers face daily. The heat and working conditions in the field were unbearable at times. Beekeepers are truly our unsung superheroes. And, during times of crisis, it’s even more important to appreciate the effort it takes for food to reach our dinner tables. Beekeepers and other agricultural workers alike toil endlessly to ensure we get food,” Manaswi affirms. 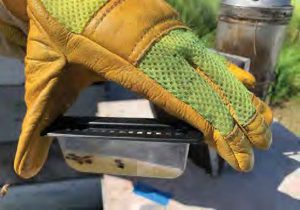 COVID-19 had a significant impact on Manaswi’s research. “It certainly did serve as a roadblock, but it taught me a lot. I had to be creative and find common household items to serve as lab tools for my work. I used items like aprons, scissors, paper towels, plastic bags, and even Tupperware. Because of the pandemic, I had to count beetles in my kitchen! My mother wasn’t all that eager about that idea, though!” he states. “Admittedly, there were countless instances when the beetles would go loose. My family and I would play tag, darting around the house with tiny fish nets in hand!”

Manaswi entered his research into the State Science and Engineering Fair of Florida. He was selected as the 1st place winner in the Animal Science category. Atreya was also presented the “Best in Fair” Grand Award for the Biological Sciences. Additionally, Manaswi was awarded other accolades for his work.

Although very appreciative, Atreya remarks, “the biggest prize for me is knowing that I am involved in something that could help save our bees.” Food is such a precious commodity and more than 80% of all plants are pollinated by bees. If these plants cease to exist, biodiversity, ecosystems, and the food chain would collapse. Manaswi states, “Bees are the key to stability on our planet. My greatest satisfaction lies in knowing that I am contributing towards their conservation.” He hopes to further his study of the honey bees in the future.

A youth researcher at heart, he believes everyone has the power to discover and learn. “Most kids find research boring or dull, but it’s really quite the opposite. I have fallen in love with the essence of learning about the unknown and exploring what our world has to offer,” Manaswi expresses, “I have come to understand the power of research and how, even as a kid, I can research ways to make life sustainable on our planet. I would tell anyone who wants to try something new to just look in their community and find the solution to an ongoing problem.” 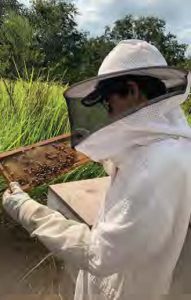 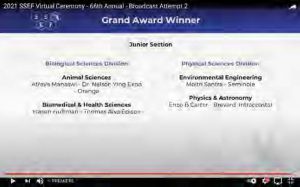