Bee hunting is the sport of finding wild colonies of honey bees. To pursue it, you usually start by capturing a half dozen or so worker bees that are on flowers, doing so with a small contraption called a “bee box” (Fig. 1). Next, you tuck a small square of comb filled with sugar syrup inside the bee box, along with the bees. Once the boxed-up bees have found your comb and have loaded up on your syrup, you release the bees to determine the compass bearing of their “bee line,” that is, the direction in which they fly to their home. Finally, you move the syrup-filled comb, along with some bees, step by step down their bee line until you find their home. The hunting of wild colonies of honey bees is a delightful outdoor pastime, and like most forms of hunting, it is a seasonal sport. There is no point in going bee hunting if you cannot find bees to establish a bee line, so usually you go bee hunting only at those times of year when you can find bees on flowers. 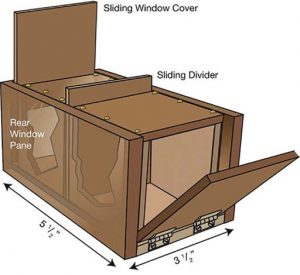 Figure 1. Diagram of the bee box that I use to introduce worker honey bees to a rich food source when I go bee hunting. It has a rear compartment in which I corral a half dozen foragers caught off flowers, and a front compartment in which I place a small square of beeswax comb loaded with sugar syrup. Once I have a group of foragers confined in the rear chamber, I place the syrup-filled comb in the front chamber, and then I raise the sliding divider so the captured bees can find and fill up on the syrup. After several minutes, I open the door to let the bees fly home and tell their nestmates about the treasure trove they have encountered.

I have almost always started my bee hunts by capturing bees on flowers, so I hesitated to say yes when I received an invitation last Spring to give a demonstration of bee hunting in Vermont on Saturday, October 19, 2019. This invitation came from Elise Tillinghast, the Director of the Center for Northern Woodlands Education, who was planning her organization’s Annual Conference. I knew that this conference would be held at the Hulbert Outdoor Center in the town of Fairlee, in central Vermont, and this meant that my chances of finding bees on flowers at the time of this conference would be slim. By the middle of October, heavy frosts have usually killed off the flowers in central Vermont. Heck, by the middle of October there can be heavy snowstorms in central Vermont. As Elise and I spoke on the phone, I recalled how, 50 years before, on 24 October 1969, my father and I had driven through snow-covered mountains in Vermont on our way to my interview for admission to Dartmouth College, which is 20 miles south of Fairlee, Vermont.

Despite my misgivings, I said yes to Elise’s request. I did so partly because I figured that I could always present an indoor talk about bee hunting if the weather prevented an outdoor demonstration of the craft, but also because I recalled reading in an old book on bee hunting about a method for establishing a bee line when nothing is in bloom. The book is a small, 72-page work called Bee Hunting. It was written by John R. Lockard and was published in 1908. In Chapter 7, Lockard describes how he is able to continue bee hunting “when all the flowers, by the laws of nature, cease to bloom” (p. 35). To do so, he would either build a small fire to heat a flat stone, and then put a chunk of honey comb on the hot stone. Or he would put a coal miner’s lamp in a pail with a vent cut in the side, and then would place over the burning lamp a pan holding some honey. “The spout of the lamp should come within about two inches of the bottom of the pan. The honey begins to boil immediately and sends its scent out over the mountains . . . [soon] bees may be heard darting through the air or seen hunting slowly through the bushes in search of something to eat.” 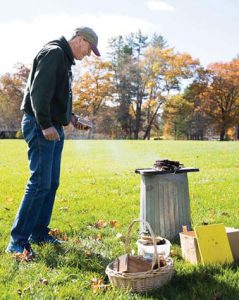 Figure 2. The author with his setup for testing the method of attracting bees to a feeding station by burning combs and heating honey in a small fire. The basket holds his standard bee hunter’s gear: bee box, jar of sugar syrup, paint pens, magnetic compass, and notebook. Photo credit: Tig Tillinghast.

Knowing how the mistake of leaving a frame of honeycomb outside a hive during a nectar dearth can give rise to a frenzy of robbing, I could see why Lockard’s method works: the aroma released by heating honey in the open must be a potent attractant of robbers from colonies nearby. So, my plan for the bee hunting workshop at the Northern Woodlands conference was to try out Lockard’s method of burning honeycombs to attract foragers (robbers) during a dearth, and if it worked, to then conduct a full-on bee hunt. Of course, this plan depended on Saturday, October 19, 2019 being a sufficiently warm and pleasant day in Fairlee, Vermont, so that colonies near the Conference Center (if any) would be fielding robber bees in search of plunder.

I was lucky that Saturday, for although the air temperature was 30°F at 6:30 AM, the sky was cloudless so the sun shone brightly and by the time I began my show-and-tell on bee hunting at 11:15, the air had warmed to nearly 60°F. Perfect! Step one was to explain the general process to my students, and then to light a little fire and start heating some beeswax comb and honey to cast forth their attractive scents. But instead of using a flat rock (which might explode) set over a fire, or a pan set in a pail containing an oil lamp, I built a little fire on an old, cast-iron griddle that I set atop an inverted trash can (Fig.2). This way, I was able to perform my demonstration without damaging the neat lawn in front of the Conference Center. Once I had my little fire burning briskly, I laid atop it two chunks of dark comb filled with crystallized honey (Fig. 3). Soon, these beeswax combs were melting and the honey they held was bubbling. Alluring aromas of beeswax and honey filled the air.

To my surprise and delight, this technique for attracting bees worked beautifully. Within five minutes of putting the chunks of old comb on the burning wood, a bumble bee flew upwind to my smoky cornucopia. This bee landed without hesitation on the palm-sized square of honey-filled comb that I had positioned on the cool end of the griddle, to give any bees attracted to the site a place that was safe—not too close to the fire – for stealing honey. The bumble bee’s rapid arrival showed me that Lockard’s advice was not just hot air. This was demonstrated again five minutes later when a honey bee cautiously approached my lure for robber bees. Like the bumble bee, she flew upwind to the fire, evidently attracted by the plume of scents coming from the heated combs, but she was more cautious than the bumble bee, perhaps because she sensed that she might soon be robbing, and she knew instinctively that robbing is dangerous work. Eventually, after about eight minutes of warily circling the tempting comb, she landed, inserted her tongue into an open cell of warm honey, and started to drink her fill. 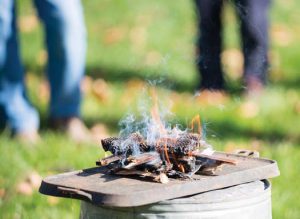 Figure 3. Close up of the old combs, containing crystallized honey, warming on the fire and starting to release the scents of beeswax and honey that are powerfully attractive to robber bees. Photo credit: Tig Tillinghast.

It was now about 12:30, so I popped inside the Conference Center to grab some lunch, and when I returned to the feeding station some 20 minutes later I was surprised to find a little crowd of 14 worker honey bees standing on the feeder comb, loading up on the warm honey. This told me it was time to start performing the standard operating procedures of a bee hunter: label with paint marks several bees for individual identification, note when the labeled individuals depart from and return to the feeder comb; and record (as well as possible) the compass directions in which the bees fly home. Within an hour, I knew that on average these bees were leaving for home on a bearing about 40° east of north, and that the hardest working bees were taking only about four minutes to fly home, unload, and return to my comb. Great! I knew from previous studies (discussed in Chapter 5 of my 2016 book Following the Wild Bees) that these four-minute “away times” indicated that the home of the bees busily visiting my feeding station was only about 300 meters away.

Knowing that the bees’ home was some 300 meters away in the direction 40° east of north, I knew that their bee-tree home was somewhere on the wooded hillside that rises steeply to the north of the cluster of cabins that house visitors to the Hulbert Outdoor Center. Fortunately, the trees on this hillside are mostly large oaks, maples, and white pines. This meant that we might need to inspect only several dozen (not several hundred) trees to find the one housing the colony. Fortunately, too, I had a team of a dozen beginner bee hunters who were, like me, eager to find “our” bees’ home. I explained that our procedure now was simple: scan slowly and carefully up and down each side of each tree’s trunk, and out along its major limbs, looking for the traffic of bees flying to and from the entrance of their nest. This tree-by-tree search work requires patience, but because the human visual system is extremely good at detecting small objects moving rapidly against a stationary background, it is usually easy to spot the bees when you are inspecting the tree that is their home. This is especially true in autumn, when the broad-leaved trees are shedding their leaves. After about 45 minutes of searching, I heard somebody shout “Found the bee tree!” Great!!! A beekeeper couple from Massachusetts had discovered “our” bees zipping in and out of knothole about 12 meters up on the south side of a handsome white oak.

Discovering this bee tree gave us all the feeling of triumph that comes from conducting a successful bee hunt. Indeed, we had conducted this hunt in an almost record time – barely three hours. What I will remember most vividly from this hunt, though, is seeing the first two bees – a bumble bee and a honey bee – mysteriously appear, without a flower in sight, lured by the irresistible scents of beeswax and honey swirling up from honeycombs warmed by a fire.