The quality of beeswax has become of increasing concern within apiculture. Residues of pesticides and varroacides affect the quality of wax and honey, and also bees’ health. Recently, wax adulteration has been blamed for many problems in brood rearing.

Various metals including aluminum, copper, iron and zinc can turn wax brown. Therefore these metals should never be used in wax processing equipment or in water used during wax processing. If wax is heated for too long and at too high temperatures (over 85°C), its color and aroma are changed.

Wax easily absorbs foreign odors. If wax is processed on an open fire it will smell of smoke. If it comes into contact with fermented honey its aroma also changes. Stored wax cakes also absorb odors from the environment: for example residues such as biocides (used for warehouse decontamination) can penetrate into the wax.

Hydrophilic substances (water soluble) including some varroacides (formic, lactic and oxalic acid) and certain pesticides cannot accumulate in wax or only to a minor degree. Amitraz rapidly degrades into its metabolites. They are detectable only in honey and not wax.

Lipophilic substances (fat soluble) are readily absorbed by beeswax, such as the varroacide Coumaphos; and synthetic pyrethroids including Flumethrin and Fluvalinate. Ethereal oils, for example thymol, produce a large amount of residues in wax immediately after application, but residue content will decrease with increased ventilation.

Examination of residues in wax

Since the first identification of Varroa in Europe, beeswax is regularly tested for residues. Based on the results, the country of origin of the wax can be determined from the Varroa treatments used there. Pesticide residues in wax indicate whether the bees collected nectar from intensive agriculture.

This is a worldwide problem, although beeswax from Africa usually has no varroacide residues, only pesticides: this was determined and published from a study of wax from different regions in Uganda. Residues in wax can be detected only in the laboratory using analytical methods.

In 2014 the University of Hohenheim examined comb foundation. Bromopropylate, a varroacide used over 20 years ago, was found and 76% of the samples contained Coumaphos. Both these substances often occur as residues in wax from Germany. The values found are so low that due to the “mobility” of the active ingredients no residues in the honey from these honey combs is expected. DEET (dimethyl-mtoluamide), an agent found in bee repellents was found in 13 wax batches.

In 50 samples analysed by the Bavarian Animal Health Service in 2015, thymol was the most common residue (37%). These high residue levels should be reduced if honey combs are left longer in the hive after treatment, and if both honey combs and comb foundation made from them are well ventilated. In 2017, the Julius Kiihn Institute examined 13 batches for residues and found the presence of 30 different substances. While the residues of the plant protection products were all below 0.1 mg/kg, high values of more than 8 mg/kg were found for the varroacides, thymol and the illegal use of tau-fluvalinate. Only rarely did high levels of the chemicals used to control wax moths (naphthalene, sulphur and the wood preservative parachlorophenol) appear.

Residues of pesticides and varroacides accrue in wax. These residues are especially concentrated in recycled wax, preventing the absorption of additional substances and possibly transferring into honey. Not only is the honey contaminated, but also the bees’ food. Sub-lethal doses in wax show an influence on reared brood and can cause insidious but also acute damage. Therefore, combs from the brood chamber should not be used for the production of foundation. Combs in the honey chamber can be contaminated by pesticides from the environment, especially after honey flow near or in intensive agriculture. 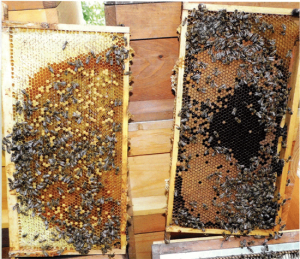 In the case of adulterants with synthetic waxes, mostly paraffin and stearin are found. However wax can be adulterated also with animal fat. Paraffin, a byproduct of petroleum production, is a composite of saturated hydrocarbons (alkanes). Stearin is a composite of palmitic and stearic acid obtained from animal and vegetable fats by saponification.

Various publications show that adulteration of wax is a worldwide problem, even though analyses started only recently. Since 2017 adulteration of wax has been discussed at various levels within the European Union to find solutions in new regulations.

Sensory examination Freshly produced wax is colorless. Absorption of flavonoids from propolis and/or carotenoids in pollen lead to a bright to dark yellow color. The typical scent of wax is enriched with aromatic substances from honey, pollen and propolis. It is almost impossible to identify adulteration from sensory examination alone.

General wax quality can be determined using simple, tests at 20°C. A chalk line is drawn on a wax bar. Cutting along this line the wax should be fine to granular, but not crystalline. When chewing or cutting the wax, it must not be sticky. Cutting along the wax surface should produce spiral-shaped shavings. When kneading the wax it should be elastic but not shiny.

A clear indication of adulteration can be concluded from the melting range (dripping point) of the wax. Heat the wax to 75°C. As it cools measure the temperature every 30 seconds. The collected data can be entered on a datasheet (Excel spreadsheet) to determine the point at which the temperature-time curve deviates from a straight line (upper point) and switches again to a straight line (lower point). For pure beeswax these points are between 61-65°C. If the beeswax is adulterated with, for example 20% paraffin, these points are at a lower range of 58-61°C. 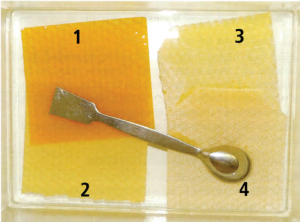 The water bath test is one way to obtain evidence of stearin
adulteration from the white precipitate (3 and 4). 1 and 2 do not appear to contain major amounts of stearin. The test will not detect adulteration with paraffin.

To test for large quantities of stearin adulteration wax plates are laid in a water bath at 37°C for 48 hours. After drying in the open air for one hour, adulterated wax will show a whitish cover: presumably the water dissolves the stearic acid out of the wax, and because it is only slightly soluble in water the stearic acid has sedimented on the wax. Paraffin is not soluble in water and therefore paraffin adulterated wax would show no reaction.

An exact determination of wax components and adulteration can be made only in the laboratory. Gas chromatography determines the total carbon coefficient and adulteration is immediately visible from the chromatogram. The fat acid spectrum can be determined also by this method, but it is complex and expensive. Wet chemical methods proving acid, ester and saponification values as well as paraffin and other wax additions are more favorable.

Current inspections of adulterations in Germany

In 2016 the Government Veterinary Institute at Aulendorf examined different suspicious comb foundation samples. The results showed severe adulteration with stearin in wax from China. By July 2017 the Bavarian Animal Health Service had analysed 172 suspicious samples. Paraffin was identified in 32%, stearin in 10% and in 6% both additives were present. Over 100 samples tested to July 2018 showed a similar result. The Ceralyse Institute in Celle examined 13 adulterated batches. In only two samples added paraffin exceeded 1%. However, four samples showed addition of stearin up to 21%.

Foundation adulterated with paraffin displays a lower melting point than pure beeswax foundation. In Summer heat, the foundation can begin to melt. Stearin can make the wax so hard that the brood cannot emerge.

On occasion bees will not adopt foundation made with adulterated wax. A Belgian research group investigated this with admixtures of 15%, 25% and 35% stearin to pure wax. The foundation was accepted by the bees and the queen laid eggs. However, significant numbers of young larvae died in the adulterated combs with survival rate decreasing from 51% to 29% compared with the control (100%). Not all brood damage can be blamed on wax adulteration. Often this is caused by diseases – especially during the second half of the year when a spotty brood pattern or dead brood can be the result of a heavy Varroa-Virus-Infection.