The following article summarizes my outlook for the 2020 almond pollination season in terms of estimated demand for colonies, pollination fees, and other information I believe beekeepers will find useful before making the trek to California. Where possible, information is based on research and data, however some of the outlook comes from my best educated guess given the information available. In 2020, approximately 1.2 million bearing acres of almonds will require roughly 2.4 million colonies for pollination services.

2019 Almond Pollination Market
According to the 2019 California Almond Objective Measurement Report, there were 1.17 million bearing acres of almonds in 2019. This brought in roughly 1.86 million colonies into California. This was down from shipments in 2018, which were 1.93 million.
Abnormally wet and cold weather in the Central Valley made pollination services challenging in 2019. Nut set per tree was down 18% from 2018, and total yield in pounds per acre is projected at 1,880, down 10% from 2019 (USDA NASS and CDFA, 2019). Not all of this was due to poor pollination, growers experienced less than ideal weather conditions throughout the rest of the growing season. I believe the recent memory of last year’s bloom-time weather will be a key factor in almond grower’s almond pollination decisions this year.

Almond Returns and Acreage Trends
As of October 15, 2019, almond prices were between $2.63 to $2.98 per pound depending on the variety. Prices have remained fairly steady in this range since 2016 (Champetier, Lee, and Sumner, 2019). Almond returns per acre have also remained fairly steady since 2016, though these returns seem small when compared with the 2013-2015 time period with almond prices well above $3 per pound. 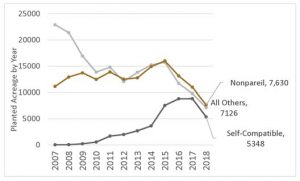 Figure 1 shows trends in planted almond acreage since 2007. Since 2015, Nonpareil, the largest planted variety, and other varieties have seen planted acreage decreasing. This slow in planted acreage corresponds with those decreasing almond prices. Additional concerns about available water going forward has likely contributed to this slowing in planted acreage.
Pollination expenses as a percentage of operating costs have increased from 6.7% in 1998 to 20% in 2016 (Champetier, Lee, and Sumner, 2019). Consequently, there has been a lot of discussion in recent years about self-compatible almond varieties (Independence and Shasta) as a way to alleviate some of the pollination expenses. Figure 1 shows the significant increase in self-compatible planted acreage from 2013-2016, however planted acreage has leveled off and decreased since 2016. This is likely due to a combination of lower almond returns in general, coupled with the Independence variety not receiving expected premiums in comparison to other varieties (Champetier, Lee, and Sumner, 2019). 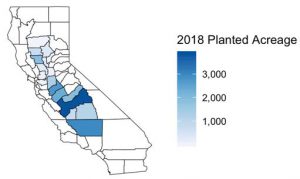 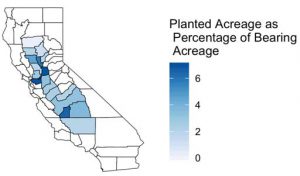 Colony Demand and Shipments into California

Idaho, North Dakota and Florida remained the top three states shipping colonies into California (Figure 5). As discussed by Hitaj, Smith and Hunt (2018), many honey bee colonies are transferred from the Northern Great Plains to the Pacific Northwest after honey production is finished to be stored until almonds bloom in California. So, even though Idaho looks like the top shipping state according to the California Department of Food and Agriculture (CDFA) border shipment data, many of those colonies in reality are coming from elsewhere. 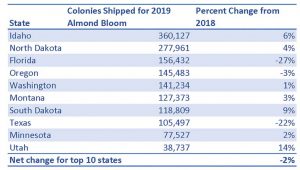 Table 1 displays the numbers of honey bee colony shipments from the top 10 states shipping colonies into California for the 2019 bloom, and the percentage change from 2018 shipments. Florida and Texas saw large decreases in the number of colonies shipped for almond bloom. This was fairly surprising, given that prior to 2019 almond bloom, Florida and Texas had seen some of the largest increases in colony shipments to almonds (Goodrich, Williams, and Goodhue, 2019). Texas beekeepers experienced losses of 46%, suggesting at least part of the decrease in colonies shipped from Texas can be attributed to high Winter losses. Florida beekeepers saw losses below the national average (17.6%) suggesting decreases were from something other than colony losses alone. Perhaps Florida (and possibly some Texas) beekeepers who participated in 2017 and/or 2018 almond pollination may have decided the costs participating in almond pollination were not worth the returns.

Almond Pollination Fees
Table 2 shows minimum and maximum reported almond pollination fees, and average almond pollination fees for the California State Beekeeper’s Association (CSBA) pollination fee survey for years 2017-2019. (Note: the 2019 results should be viewed as preliminary.) According to the CSBA survey, average almond pollination fees have gone up around $5 per colony per year since 2017. The range in fees seems to have grown over time, in 2019 there is more than a $60 difference per colony between the lowest and highest fee reported. From talking with others in the industry, the average fee of $195 in 2019 may be on the lower side. Fees for a majority of colonies likely ranged from $200 to $220 per colony in 2019.
The range in fees reported is likely due to differences in colony strength requirements. In a 2015 survey of almond growers, I found a 5.7% premium paid for colonies contracted above the industry standard (Goodrich and Goodhue, 2016). If we assume the 2019 CSBA average corresponds to an average fee for an 8-frame colony, that means a higher than industry standard colony would have rented for on average $206 in 2019.
CSBA asks their beekeepers about projected fees for the upcoming pollination season. Many beekeepers will have already made some of their contractual arrangements in advance by the time they respond to the survey, so these projections are fairly reliable. The average projected fee per colony for the 2020 pollination season is $204. Again, if we factor in the 5.7% premium, that means a projected average of $216 per colony for those contracted above the industry standard of 8 frames.

Supply Issues for 2020 Almond Bloom
Given that most of the colonies in the U.S. already participate in almond pollination, it is important to think about where additional colonies will come from for the 2020 pollination season. In a research article, co-authors and I thoroughly explore this issue, in short, we expect Florida, Texas, Georgia and Louisiana to supply a large amount of increased almond pollination going forward (Goodrich, Williams and Goodhue, 2019). Clearly, as seen in Table 1, Florida and Texas saw decreases in their supplies of colonies between 2018 and 2019. This suggests fees may have to increase even further to get sustained participation from beekeepers in these areas.
One issue that I foresee as a potential problem this year is the drought that has been occurring in parts of the south this fall. From September through the week of November 5, 2019, Georgia and Texas have been experiencing at least a moderate drought over 58% and 48% of each state, respectively (National Drought Mitigation Center, 2019). Florida and Louisiana have seen smaller, but still significant averages of 18% and 13% of the total area in each state experiencing at least moderate drought. These are states that beekeepers often place colonies in after honey flow in the Northern Great Plains (Hitaj, Smith and Hunt, 2018). The southern climate usually facilitates at least some pollen and nectar flow during the fall months. This year, southern beekeepers likely had to provide more food supplements than usual. This has the potential to impact the overall health of colonies coming out of these southern states.

BeeWhere Registration
As a reminder, beekeepers entering California for almond pollination are required by law to register colonies in the BeeWhere program. The registration cost is $10 per beekeeper, no matter how many colonies. The goal of this program is to help minimize pesticide exposure for honey bee colonies by alerting beekeepers when pesticide applicators plan to apply chemicals nearby. Additionally, this will provide better information on the true causes of bee kills when pesticide exposure does occur.
I have not heard if fines will be applied this year for noncompliance, however it is a possibility. Beekeepers may register colonies online at the following link: https://beewhere.calagpermits.org/

Conclusions
I believe the memory of last year’s cold and wet almond bloom period will be weighing heavily on grower’s minds going into this season, as will lower per-acre yields in 2019. To me this means almond growers will want many strong colonies to ensure adequate pollination, but smaller returns will have them wanting these colonies at a cheap price. For the business savvy beekeeper, this can provide opportunities. Are there any benefits you can request to provide your grower with a discount per colony? One thing that comes to my mind is asking for a portion of the payment up front in exchange for a lower per-colony fee. This can provide some working capital to use to pay transportation, treatment, or feeding costs required before almond bloom, in addition to providing additional security in your pollination agreement.
Best of luck with your almond pollination agreements, and wishing you a happy, healthy and prosperous year in 2020!