Dogs are famous for their sense of smell. A dog’s sense is so advanced they can smell disease in bees or a host of medical conditions in humans (cancer, diabetics, sleep apnea) and lots of other stuff (whale poop, firearms, toxic waste sites, child pornography and even covid 19). With about 220 million scent receptors – compared to five to 10 million in humans – dogs can detect odors 10,000 to 100,000 times that of humans. They can detect some odors in parts per trillion and they can detect countless subtleties in scents.

Dogs are being used in an ever-growing number of detection scenarios. A news story from Texas Tech and Virginia Tech announced a “$475,000 Agriculture and Food Research Initiative grant” to study whether dogs can detect agricultural pests and pathogens. This effort proposes to use dogs of several breeds to determine if they can be used for detection of spotted lanternfly (a cicada/aphid related plant pest) and spotted mildew in

agricultural crops. Nathan Hall, Texas Tech University assistant professor of Companion Animal Science, said “he hopes dogs eventually save farmers many millions of dollars in damage annually.” University of Penn Veterinary School currently has three dogs in training, a Labrador retriever, a German shepherd, and a Small Münsterländer searching for Spotted lanternfly egg infestations. The German Shepard, named Lucky, is already being used by the Penn Department of Ag in the field https://www.npr.org/2020/12/11/944185028/pennsylvania-turns-to-mans-best-friend-to-sniff-out-spotted-lanternfly-infestation.

Humans can train our noses to recognize bee colony disease conditions including the foulbroods and even PMS. American Foulbrood (AFB) is most easily distinguished, described variously as the odor of a chicken house, or an athlete’s locker, left uncleaned. Maryland, uniquely among states, has been training and using dogs to detect American foulbrood (AFB) since 1982. Training involves a rigorous training schedule lasting six months, a source of AFB (not just an infected colony), a close relationship of trainer with a well-disciplined animal, an indoor space for the training and for continuous reinforcement of the smell conditioning without contaminating the space and a great deal of patience. Safety protocols must be followed to avoid that dogs do not get stung. Defensive colonies, such as Africanized bees, kill and injure dogs and many other animals each year. If they get stung, most dogs would lose their concentration and not be useful for a period.

The use of dogs in detection of AFB for Maryland Apiary inspection was started by Maryann Frazier before her move to Penn State. Jerry Fischer, regional, then state apiary inspector, utilized two Labrador retrievers, Max then Byno and then regional apiary inspector Bill Troup trained a 3rd dog Thorn around 2000, followed by Klinker, also both Labs. Klinker and Bill retired in 2015. The 5th Maryland AFB dog, a yellow lab named Mack, went through his six-month training period as a two-year-old and began field work in 2017. He currently works alongside owner and handler, Cybil Preston, the chief apiary inspector for the Maryland Department of Agriculture (MDA). MDA uses AFB sniffing dogs in their regulatory authority for the certification of honey bee colonies as disease-free.

As with the previous dogs, Mack was enrolled in the scent training program with the Maryland Department of Public Safety and Correctional Services. This facility trains dogs for drug and contraband (especially cell phone) interdiction along with a few dogs for other purposes such as MDA dogs for foulbrood detection. Each group of dogs “are trained on scent detection through a series of drills and games,” says Preston. Training Mack, Cybil says involved “playing games with toys and training aides saturated in the AFB bacteria.” Cybil had to wear rubber gloves and training was done indoors so as not to contaminate or possibly transmit any AFB. According to Mark Flynn, K-9-unit commander at the state’s Department of Public Safety and Correctional Services, “when a dog is searching, he believes in his heart he’s trying to find his toy”. Although the dogs may play as a reward in targeted scent detection, the dogs are trained to “work” following commands and must be continuously retrained to keep their detection and working skills current.

After Mack was trained, a second dog was authorized for the Apiary inspection program. Cybil worked a year with a beagle-cross named Clark. Although Clark was smart and a good sniffer, he “did not work out”. One issue with beagles is they tend to prefer a food reward which is a “no-no” in scent training. During his training, Clark simply refused to take the tests. Cybil, by then attached to Clark, retired him to become part of her farm. The Preston farm raises chemical-free produce and provides a rescue service of senior animals (Cybil calls it their “Senior Equine retirement village”). Currently, besides dogs, the farm menagerie includes five donkeys and three goats.
When it became clear Clark was not going to cooperate, Cybil was offered Tukka. Tukka was part of a litter of springer spaniels bring trained to detect prison contraband. Although an excellent search and find dog, Tukka had one problem – he was scared of noises. The clanking of a jail cell door for example would result in his cowering along the wall, terminating his desire to work. Believing he was better suited as an outside than inside dog, Cybil took him on. Tukka trained from June to October and passed his final test without a single miss.

In the field, when Preston commands them to “find,” the dogs move from beehive to beehive, sniffing each one for the distinct odor of AFB. They work along the front of the colonies and then along the back of the same row. If Mack smells the disease, he sits to alert to his detection. Tukka is an aggressive alerter. He gets super excited, pulling at his leash trying to paw the ground to alert to the AFB scent. Mack works slow and steady while Tukka works faster and at a higher energy level. He is usually held on a leash because he wants to dart between and circle around and between colonies. If disease is detected the dogs are praised, get special loving, given water and rewarded with a special ball to chase that they do not get at any other time. They then are bedded in the state van.

Cybil then manually goes through the indicated colony. The colony is flagged, samples taken to be sent to the USDA Bee Lab at Beltsville, MD for AFB confirmation and the apiary is quarantined until results come back from the lab. Most often though the infestation is moved onto a burn pile right away by the beekeeper. Before the bees might be certified for movement to a pollination site or as clean for sale of nucs the dogs are put to work again – at a different section of the apiary. Cybil is not satisfied until they fail to alert this attempt.

Cybil says the dogs are “incredibly efficient – in a span of three weeks, Mack inspected over 1,600 bee colonies that were being sent to California for almond pollination. And he is accurate – in field testing, he correctly identified 100 percent of infected hives,” she says. “It would take us a year to work on that many colonies.” Cybil hopes to use Mack another year or so.

The dogs work November into March/April, mainly in the morning and only when temperatures are below 52 degrees. Mack does not like bees and if he hears them or there are bees at the entrance, he loses his concentration. Cybil believes he has been stung on her farm but never during work. It is just his gentile nature. Tukka is a bit more fearless but he too does not like bees on his fur. 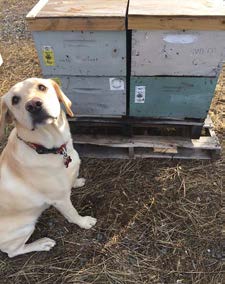 Both dogs must be continually reinforced. Inside her basement she uses boxes or takes the dogs to the state training facility where they train inside among crates and boxes. On her farm Cybil will use her own colonies as part of the training but not with the AFB for fear of contamination. Cybil says they are the best of friends at work and at home. And they get summers off to play on the farm. They especially like the swimming pool according to Cybil.

New Zealand also has a program to use dogs for AFB detection. Since foulbrood antibiotics are not permitted in New Zealand and queens and packages are shipped worldwide from New Zealand, including to Canada, they have recently refined their use of dogs for AFB detection. Their plan is to use just AFB scent to train, which Maryland is doing as well. Results in the past when dogs were trained just to infected colonies has apparently not worked as well as hoped for. https://beemission.com/blogs/news/new-zealand-sniffer-dogs-are-training-to-detect-afb

Mack was a feature of Disney+ show It’s a Dog’s Life. Check it out on Season One Episode Five Filmed November 2019, aired March 2020. A good article on Maryland’s use of dogs for AFB was published in the New York times: https://www.nytimes.com/2018/07/03/dining/dogs-bees-colonies-sniff-bacteria.html