This doesn’t happen often to a beekeeper, some guy with a gray fedora shading his darting eyes, standing in a heavy coat in the shadows between the almond trees. And it didn’t to me, but it might as well have.

Those who use plastic foundation can turn the page, as this does not apply to them. But for those who have become dyed in the wool organophilic beekeepers, those who think wax is what bees want and need and buy commercial wax foundation because of that leaning, this came as a surprise to me: Wax foundation is a low grade poison to bees. Moreover, we can replace it with – nothing.

Says who? For starters, says Steven Cook of the USDA bee lab at Beltsville, MD. Steven studies the effects of pesticide exposure on the metabolism of bees. He found in his testing that “if nurse bees are exposed via (physical) contact to a mix of two common miticides for one week, they lose nearly 30% of their basal metabolic budget (think “energy”) when cleaning these chemicals from their systems1.”1 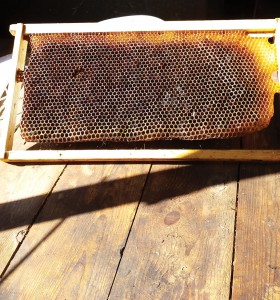 Both his test chemicals, coumaphos (e.g. CheckMite+) and fluvalinate (e.g. Apistan), are ubiquitous in commercial foundation primarily because commercial beekeepers used them in treatments against Varroa mites. The cappings from that commercial wax is made into standard wax foundation available from the major suppliers. These two miticides are not only chemically held by the wax, but their effect when mixed (as suppliers do when melting thousands of pounds of cappings wax together to make foundation) makes the combination even more toxic to bees. Beyond this, bees also are routinely exposed to other pesticides in their foods under normal foraging circumstances, so the metabolic debit only starts with the foundation. Steven also found that “nurse bees fed very low doses of the neonicotinoid Imidacloprid for one week lose over 50% of energetic budget.2”

Put the two together and, well, do the math. There is not much energy left to live on. These metabolic debits in bees are analogous to your liver cleaning last night’s wine from your system, but the bees lose a significant amount of their total energy income to do it. In effect, bees on wax foundation wake up every day with a big hangover. This lost energy is not available for health, growth, work, or reproduction. We are trying to do something about neonic exposure, but it is beyond our direct control. In the meantime, is there anything we beekeepers can do about the issue of the chemicals in commercial foundation?

This got me wondering, but the penny didn’t drop until Bill Castro, a thinking beekeeper in our club (Central Maryland Beekeepers Association, or CMBA), donated unused wax foundation to our club’s nascent nucleus hive project. “I don’t use it anymore”, he said, off-handedly. That got my attention. He showed me a frame of perfectly drawn comb that the bees had made themselves entirely from scratch. Always the engineer, I had to test it.

The frame Bill showed me was a deep frame with fully drawn, wall-to-wall comb that had started with a blank wedge-top frame, three tongue depressors and two bamboo skewers. After I got the hang if it, the frame takes 15 seconds to prepare, is organic, sustainable, and is a fraction of the cost of a frame with wax foundation. The bees draw the foundation as they would in a top bar hive, guided by the lower edge of the tongue depressor. I have seen frames that were inserted with no guide and no foundation. The bees do a reasonable job with those, too, but nowhere near as neat as with the tongue depressors in place. They eventually fill in the whole frame, leaving the needed bee space beyond the vertical sides of the frame. The completed frame can be manipulated normally, used in an extractor and a solar wax melter (unlike plastic frames). Don’t leave out the skewers (as I did in a test frame) or you risk the whole comb hinging out of the frame during an inspection. The bees do not appreciate that oversight. One CMBA member put 10 blank frames in a medium super and the bees drew them all straight and in line during a nectar flow. I staggered mine between normal foundation and the bees complied, drawing the comb straight and true. 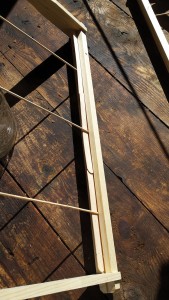 The best thing since bottled beer, you might say. Though our club has started to use these frames in a pilot project in our nuc yard, all is not perfection. When a super has 10 of these waxless frames in place, there has been some cross-frame building on hives that are not level. However, we saw no more than the amount often associated with the use of new plastic frames. As well, some beekeepers have been shocked to find a frame almost completely drawn as drone comb. We do not know yet whether this is a seasonal affectation or a factor of the position of the frame within the hive. Also, given that all the parts are assembled with a friction fit to hold them in place, they don’t manage rougher treatment until the bees cement the pieces together with beeswax. However, normal beeswax foundation is fragile as well, and frames with wax foundation must be kept vertical before insertion in the hive. Lastly, if using a wedge top bar, the wedge can break free (what it is supposed to do), and therefore should be nailed (staples are faster) in place before assembly. 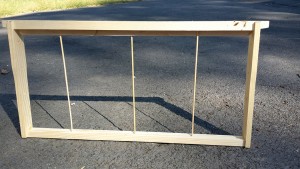 Getting a box of 500 non-sterile tongue depressors is as simple as an Amazon search. They are not expensive. Your local CVA or Rite-Aid will usually have only sterile, singly packaged pieces. And these are tongue depressors, not popsicle sticks. Similarly for the skewers, they are available in any super market usually in 12” length, but you can get them close to the length you need shopping online. I use sheet metal shears to cut them to length.