Conventional wisdom in commodity based agriculture has done more harm than good.

Many are looking for a component solution to bee die off. Control the Varroa mite; Ban pesticides; Grow more flowers, etc. All of these problems are symptoms of a simplified food system, and unless we reform how we produce food, the bees will continue to die. “If you want to save the honey bees, heal the soil”, Dr. Jonathan Lundgren coined this phrase based on his research in agroecology.

Additional articles will be focused on risk assessment of GM plants and pesticides, predators and how they reduce pests, and how insect communities function to avoid the use of pesticides. The articles will be of direct application in bee operations, but also allow the beekeepers to have some fodder when they discuss changing agriculture to their landowners and farmer friends. 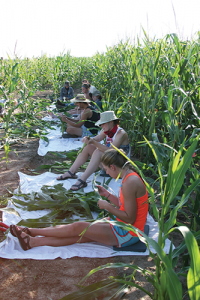 Our research team dissecting corn plants, searching for insects. We found that cornfields with higher insect
diversity had fewer pests.

As a young scientist, I swore I would never work in corn. So many of my peers had devoted their entire careers to studying the insect pests of corn, each carving out a narrow niche around which they could weave their identity. After 40 years, they would be world renowned for their encyclopedic knowledge of the corn rootworm mating system, or dispersal of the European corn borer, or what color or lures these pests see best. I don’t begrudge anyone their study focus: the world needs to know how beetles have sex. But there seemed to be a disconnect between the problems that farmers were facing and the solutions that were being provided. Looking back after 20 years in the field, I think that what I was sensing is that science in corn was in a rut. Indeed, science in agriculture feels like it was in a rut.

Where was the innovation going to come from that was going to advance food production? Currently, innovation in agriculture comes in the form of new ways to add value to a narrow suite of crop commodities (subsidized, fossil-fuel intensive, corn-based ethanol anyone?). Or in the new technologies that farmers could purchase that would help them to grow more of these same commodities (i.e., Bt corn, RNAi-based corn). The innovation was directed toward making a broken system work, rather than asking the more pressing question of whether the system itself was fundamentally flawed.

Despite my earlier proclamation of avoiding work in corn, it wasn’t long before I found myself immersed in a project on predatory insects in this crop. Over the course of several years and on two continents, we discovered that corn rootworm larvae were frequently consumed by predators in the soil; invertebrates like ground beetles, rove beetles, ants, crickets, spiders, centipedes and many others. This predator community is a functional unit rather than simply an assemblage of individual species, and that the predator community is dynamic and that it frequently changes over the day and growing season. And most importantly, the predator community in corn (and likely many agroecosystems) is depauperated in species, and only attains its potential for pest control when it is saturated with species. I was even so bold as to suggest that we can replace GM corn seed and insecticides with natural pest controls, if we change the habitat in cost-effective ways that positively affect predator communities.

Presenting this data to various conventional farming groups was discouraging at first; most farmers were not willing to listen to some scientist telling them to change their lifelong approach to farming when pesticides are so easy to use and readily available. Eventually, I encountered a growing number of farmers that had stopped using pesticides and seldom worried about pests. I didn’t know it at the time (and these farmers may not have known it at the time either), but these farmers were to define regenerative agriculture as it is practiced today. The motivation for changing their farms had little to do with insect pests: reduced pest populations were simply gravy over the meal made good through soil health and biodiversity promotion.

In a regenerative system, plant diversity (and the myriad other species it supports) and soil biology replaces many or all agrichemical inputs. The principles employed by these farmers are simple: stop tilling, never leave bare soil, more plant diversity on the farm is better than less, and livestock and crop production belong together. The practices that they use to support these principles vary substantially. From cover crops, to crop rotations, to intercropping, to managing field margins, to allowing pastures to rest from intense grazing pressure, the practices are adapted to the conditions and goals of a particular operation. Regenerative farms are knowledge intensive, not technology/input intensive. 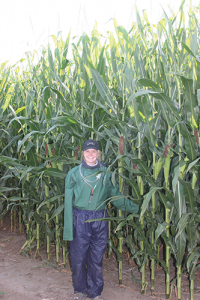 Claire LaCanne led a study that showed regenerative cornfields had fewer pests and were twice as profitable as their conventional neighbors.

Our team, led by Claire LaCanne (now at the University of Minnesota), decided to empirically test the claims of benefit made by regenerative corn farmers. The trouble with many similar systems-level studies is that they do not necessarily represent best management practices. For this study, we visited with regenerative farmers that were recognized as regional leaders in North and South Dakota, Minnesota, and Nebraska. We asked each to point us to their neighbors that were considered good farmers but using a conventional approach to farming. Thus, we evaluated the two corn production systems from a regional focus and allowed the farmers themselves to design the treatments based on experiential knowledge. While specific practices varied substantially among the different farms, some consistencies were that all of the conventional farms used Bt corn seed treated with neonicotinoid insecticides, and none of regenerative corn farms used insecticides of any kind (often, it was decades since the last insecticide application).

The results of this work should be nothing less than the basis of a revolution in how pests are managed. The insecticide-treated cornfields had 10 times more pests than the insecticide-free, regenerative cornfields. The key to this result is that the regenerative farmers did not simply abandon insecticides and GM corn; they replaced these inputs with practices like diverse rotations and winter cover crops. What these farmers showed is that they did not have to react to pest populations if they favored diversity and soil health on their operation.

The regenerative farms produced about 29% less grain than the conventional farms, but were nearly twice as profitable. The main reasons for this discrepancy is that the conventional farmers spent substantially more money on corn seed and fertilizers than their regenerative counterparts. Moreover, the regenerative farmers marketed their grain beyond just selling it to the local coop, and this increased their gross profits substantially.

When we looked at the relationships between profits and yields, another surprise presented itself. Yield did not correlate well with profits, in large part because of the increased costs associated with attaining high yields in a conventional farming system. In contrast, the amount of particulate organic matter in the soils of these cornfields was predictive of a cornfield’s profit.

In the end, this study overturned a number of preconceptions that are widely held about farming. Input-intensive corn production was not the best business decision: farming for yield was not necessarily farming for profit. Farmers that chose practices that fostered soil organic matter had higher profits than their neighbors who farmed for yields.

In entomology classes during graduate school, I was trained that pests were inevitable and the best we could hope for was to optimize our reaction to reduce their financial cost. Alternatives to pesticides are given some attention in coursework and research, with the unspoken knowledge that farms need pesticides to survive. On one level, this is true. Large monoculture farms that destroy the biology in their soil require pesticide inputs to replace the ecosystem functioning that the biota once gave the farmers for free. But this study shows that pests are not inevitable in a well designed system.

It was regenerative farmers that taught me that there was a better way. Conventional wisdom in commodity based agriculture has done more harm than good, and misguided science has been the basis of this conventional wisdom. Pests are a symptom, not the problem. And until we address the problem of a simplified food system, pests will continue to try to correct our imbalances.

I now know that my distaste for corn was misguided. I imposed my unhappiness for the state of agricultural science on a plant that has come to represent that system. It was only when my mind was ready to dispose of the untruths of agriculture that I could listen to the lessons that I learned in cornfields. The most striking of which is that we can solve planetary scale problems using our food system, and that regenerative agriculture opens that path.