Area beekeepers want to see studies done on varroa mites, which are to blame for an increase in bee deaths 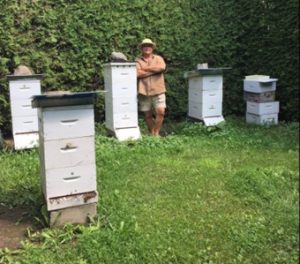 Beekeeping is more art than science, and that’s why recent die-offs of the insect are startling local apiaries.

In terms of hives, which can range from 10-20 for a backyard beekeeper, to hundreds for a commercial space, a typical over winter die-off is usually about 10-20 per cent.

That’s to be expected, and beekeepers plan ahead, including treating for mites.

“There’s only so much a beekeeper can do to keep the bees alive,” explains Bob Valcov, of Valcov’s Apiary, north of Aylmer, Quebec.

Valcov tells CityNews he was lucky this year, having only lost one out of 10 hives, but he’s heard that many others have lost much more.

He’s been an amateur beekeeper for 35 years, and has really noticed a huge increase in the presence of varroa mites across Canada in the past 15 years.

“On their own, varroa mites aren’t going to necessarily kill a hive, but they weaken the hive, but then (the bees) are susceptible to other things.”

Russell Gibbs is a third-generation beekeeper in Vankleek Hill and explains how the mites attack the bee.

“They attach themselves onto the back of a bee, everyone likens it to if you had a dinner plate on your back that was essentially on you since birth and it was feeding off of your blood and fat,” notes the owner of Gibbs Honey.

The treatments they are using are becoming less and less effective, and it led the Gibbs family to lose 40-45 per cent of their hives over the winter, although they’ve heard of losses that reached 90 per cent.

Andrea Gibbs would like to see some large scale studies done by the federal government, to determine the best way to combat the increased presence of varroa mites, since everyone can have their own opinion on how best to deal with them.

“We’re hoping that with this kind of year, this will be translated to a government level and a higher level to help really fund research, (such as) alternative treatments for mites, and funding those large scale studies in addition to really evaluating the impact that combinations of pesticides have and the habitat loss, is there ways that we can try to regulate that.”

She said it’s about getting the education out there on the importance of bees and pollination to our daily lives.

Bob Valcov with a simple way that you can help the bee population this spring; don’t mow the dandelions off your lawn right away.

Area beekeepers want to see studies done on varroa mites, which are to blame for an increase in bee deaths – CityNews Ottawa