Much has been said about most of the major challenges facing honey bees these days. I like to refer to these as the five “Ps” (Pathogens, Pests, Poor Nutrition, Progeny and Pesticides). The one major challenge facing bees that is too often overlooked however is climate change. Specifically, climate change induced anthropomorphically through the burning of fossil fuels. Thankfully, the evidence indicates that the farming practices of ecological agriculture can be harnessed to reverse the damage being caused by greenhouse gas (GHG) emissions.

The vast majority of scientists agree that the dramatic increase in atmospheric carbon-dioxide from around 280 parts per million (ppm) at the start of the industrial revolution to over 400 ppm of CO2 currently is caused by human activity, and a growing body of evidence indicates that this is playing a significant role in the numerous weather extremes and weather-related changes being observed globally.

For honey bees this includes the increased occurrences and severity of droughts. Not only do bees require some water in order to survive, but flowering plants are unable to grow when there is no moisture in the ground. On the other end of the spectrum is the increased risk of flooding which has the potential to not only destroy necessary pollinator forage, but may have the capacity to destroy the tree or structure housing a colony, and can easily sweep the typical beehive off its hive stand and send it downstream drowning the inhabitants.
The overall increase in the average global temperature is not just melting around 97 percent of the glaciers on the planet, but is causing noticeable shifts in the seasons and can cause plants to bloom at unusual times, severely impacting forage availability at critical times of year.

Because this situation has never occurred previously in our recorded history, we really don’t have a clear idea of what to expect as a result of our having increased the carbon dioxide levels in our atmosphere by at least 40 percent. Our climate which had been remarkably stable for all of human history has now become unpredictable. Here in Vermont’s Champlain Valley for example, Winters are getting milder, temperature-wise, with lows only getting down to 10-15°F below zero instead of the 20-25°F below zero that had been common place in the past. Some Winters are consistently cold and snow covered, while others are relatively mild with little snow cover all Winter long. This unpredictability makes it difficult to prepare hives for Winter. Is the Winter going to be a long cold one, requiring hives to have more than the typical amount of honey in order to survive (and thus requiring supplemental feeding in the Spring), or is the Winter going to be relatively mild, with colonies requiring just as much if not more honey than during a severe Winter since the bees will be more active in the warmer weather and will utilize their food stores at a faster pace than normal? 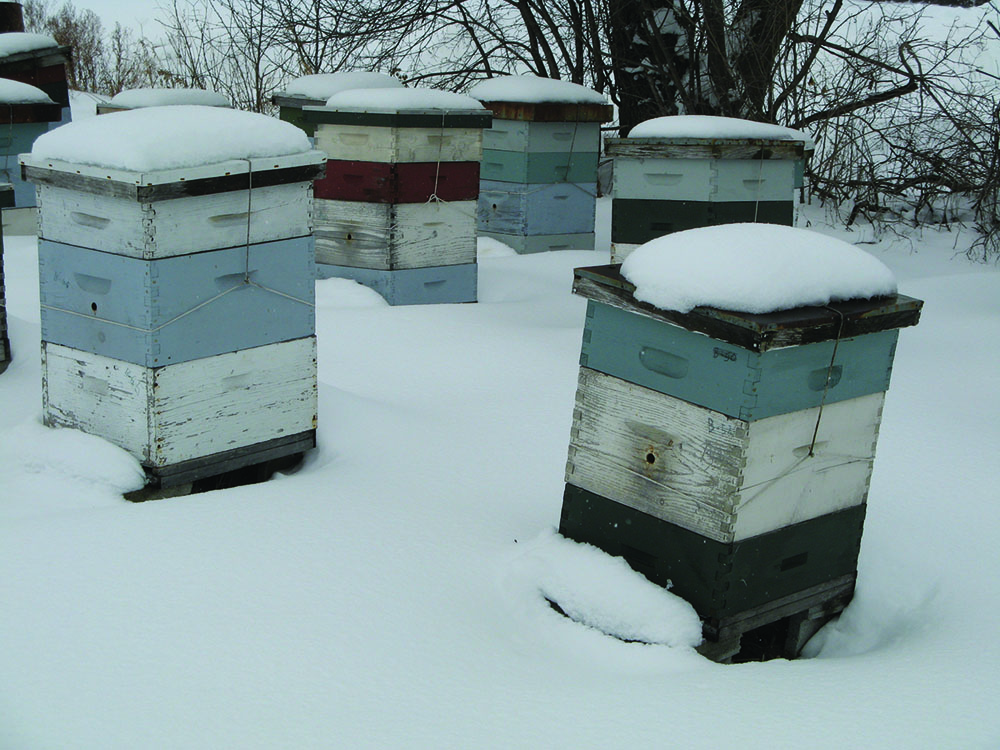 What is the Winter weather going to be like this year? Global climate change is making the weather increasingly difficult to predict, which in turn is making the job of safely seeing your bees through the Winter months more challenging.

With all due respect to the Farmer’s Almanac, I have changed my beekeeping practice to wintering hives with the equivalent of a full deep super of honey above the brood nest of every hive as insurance against starvation in either scenario. This is about twice as much honey as had been customary to leave on hives twenty years ago, but it typically relieves me of having to provide any type of supplemental feeding no matter what the winter weather is like.

How can we deal with greenhouse gas emissions, the resulting weather extremes and weather unpredictability that accompany them? It appears that we must transition to renewable energy sources (solar, wind, hydro, geothermal and biomass) and stop burning fossil fuels as soon as possible. This also means that we will likely need to cut back on our energy usage, particularly the vast amount of energy we simply waste as a result of inefficiency or laziness. Reducing our energy demand will make it easier to meet our energy needs with renewables alone. However, we also need to do something about all that additional carbon dioxide that is already in the air. While a number of geoengineering solutions have been proposed, there is only one practical solution that has already been proven to work without creating equally unbearable side effects and additional problems: the use of plants to sequester carbon in the soil.

A spoonful of healthy soil contains more micro-organisms (bacteria, fungi, nematodes, protozoa, algae, etc.), than there are humans on the planet and these organisms have a huge appetite for carbon (Hoorman, 2010). As a result, they quickly use up all the available carbon in the soil and to get more they work with plants who sequester carbon in the soil through photosynthesis. The chlorophyll molecules in plants allow them to use the energy from sunlight to break apart water molecules into water and hydrogen. Plants release the oxygen into the atmosphere and temporarily store the hydrogen. In the second stage of photosynthesis, the hydrogen is combined with carbon dioxide to create carbohydrates such as the simple sugar glucose.

Well made compost and especially humus is full of biological activity (and worms), as well as carbon in the form of organic matter. Plants grown in such soil tend to resist diseases, droughts and floods and are able to remove carbon dioxide from the atmosphere and sequester the carbon in the ground.

Not all of the carbohydrates manufactured by plants are consumed by the plant or inserted into the nectar they use to attract pollinators. When they produce carbohydrates through photosynthesis, plants will emit a significant amount of these carbon containing compounds into the soil. Micro-organisms in the soil quickly consume these root exudates and want the plant to produce more. In order to encourage the plant to produce more the micro-organisms work on behalf of the plant so that the plant will grow strong and healthy and exude a lot of carbon containing materials from its roots.

For example: fungi will transport water and nutrients to the roots of the plant; and bacteria will fix nitrogen, synthesis hormones, and even produce antibiotics or fungicides for the plant. Over the course of a year, an acre of wheat can take 8,900 pounds of carbon in the form of carbon dioxide in the atmosphere, combine it with water and make about 22,000 pounds of simple sugars. Estimates are that world-wide, 15 percent of all the carbon dioxide in the atmosphere is transformed by the process of photosynthesis each year (SAPS, 2015).

Of course we need to sequester carbon in a way that ensures soil micro-organisms won’t simply consume it all and release it as carbon dioxide back into the atmosphere once again. We know this is possible since the organic matter found in soils, such as throughout America’s fertile mid-west, were historically much higher than they generally are today with levels of 6-10 percent common, and documented levels of organic matter as high as 20 percent (LaSalle 2008).

What has prevented soil organisms from decomposing all the soil organic matter in the past? This is not fully understood, but we do know that the one form of carbon in soil that appears to remain stable for centuries is humus. Humus refers to the part of soil organic matter that is rather shapeless and formless without the “cellular structure characteristic of plants, micro-organisms or animals” (Whitehead, 1963). According to Wikipedia, “It is difficult to define humus precisely; it is a highly complex substance, which is still not fully understood. Humus should be differentiated from decomposing organic matter. The latter is rough-looking material and remains of the original plant are still visible. Fully humified organic matter, on the other hand, has a uniform dark, spongy, jelly-like appearance, and is amorphous. It may remain like this for millennia or more. It has no determinate shape, structure or character. However, humified organic matter, when examined under the microscope may reveal tiny plant, animal or microbial remains that have been mechanically, but not chemically, degraded. This suggests a fuzzy boundary between humus and organic matter. In most literature, humus is considered an integral part of soil organic matter.”

Until soil scientists learn more about humus and how it is formed we can only guess at how it is created. The evidence so far indicates that building soil organic matter and carbon levels that will create an abundance of soil micro-organisms that will help plants to thrive and sequesters carbon in the ground, requires more than simply adding organic matter to the soil. We now know that to build up the percentage of carbon in the soil over the long term (humus) there are certain agricultural practices that have proven themselves successful. Next month we will review these agricultural practices and explore what it will take to restore balance to our planet’s atmosphere, our struggling ecosystems, and give our honey bees a leg up.

Special thanks to the MA Chapter of the Northeast Organic Farming Association and Jack Kittredge for the white paper: Soil Carbon Restoration: Can Biology do the Job?, which formed the basis for this article series. http://www.nofamass.org/content/soil-carbon-restoration-can-biology-do-job

•SAPS (Science and Plants for Schools), Measuring the rate of photosynthesis, 2015 www.saps.org.uk/secondary/teaching-resources/157-measuring-the-rate-of-photosynthesis (accessed 11/1/2015)