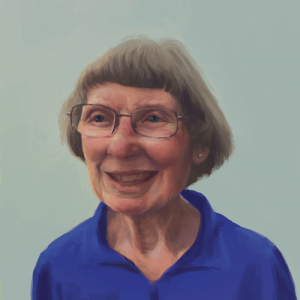 The East Cupcake Beekeepers Association usually meets on the 3rd Thursday of the month. But in December the date is too close to Christmas so members have decided not to hold that meeting. Instead they have been going to the West Gumshoe Beekeepers Association’s Christmas Party held earlier in the month. It is fun but it has become very predicable. The same people bring the same things every year. The fruitcake never gets eaten and the person who brings the punch always forgets the ice so it’s sort of warmish and too sweet. So this year The East Cupcake members decided to have their own party and actually invited the members of West Gumshoe but said that the party and its refreshments would be done entirely by members of East Cupcake. That was a brave move since the club members would really have to volunteer to do some decorations as well as bringing all the food. The West Gumshoe members thought it was about time they got invited to someone else’s party.

Now what? What should the members do first? Plan the party or get volunteers? In the end it turned out that both were done at the same time. One member had a huge box full of decorations left from some gala somewhere and offered to ask two other members to help decorate the meeting room. So that is taken care of. 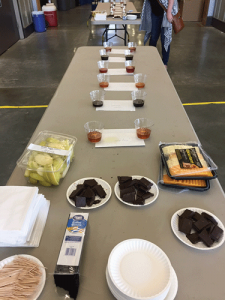 Have a honey tasting at your holiday party. Everyone likes tasting honey from other beekeepers.

Uh oh – what day is the party? Perhaps the first thing to do is find out when the meeting room would be available. If there will be decorations then those volunteers will have to do that in advance of the time set for the party to begin. They may be able to decorate the evening before. The decorators also need to know when the decorations must be taken down – right after the party ends or can they do it the next day? So meeting room coordination is at the top of the ToDo List.

It would be nice if the meeting room had a choice of available days. Then it would be possible to see how many of each club would attend. Having the approximate number of people would make it much easier to plan refreshments. Coordination between the two clubs will be necessary.

Refreshments next? Yes if you have an idea of approximately how many will attend. Since the West Gumshoe people will not be bringing any food, there’s no danger of having the unloved fruitcake. Refreshments do not have to be all cakes and cookies. Some savory meatballs in a sauce can be served. Suggest members visit www.honey.com and click on Recipes. Visit the different categories to find ones that would be suitable for the party. Since the members are already familiar with foods brought for club picnics and beeyard days, the refreshments for the Christmas party will be delicious. A Refreshments Coordinator could be useful so that there are enough beverages and a balance of dips, cheeses, cookies and other desserts. The club’s treasury can pay for plates, cups and utensils.

Are there enough volunteers? If not, just remind the members that the alternative to their party is the fruitcake.

How can the club’s Christmas party be both different and better? One thought is to call it a dessert-only party and only have items suitable for dessert. (Remember – it’s the season when diets can be officially ignored – just ask Santa Claus.) Or make it just the opposite – some hot dishes with meats, such as the savory meatballs mentioned above. Have salads, even a pot of hot soup. Various cheeses with an assortment of crackers. And, since it is to be more of a complete meal, of course there will be some Christmas-appropriate desserts. If some of the dishes are made with honey, then share those recipes with the members.

A honey tasting could be fun. Ask members to bring a small jar of their own honey. Have plastic coffee stirrers for tasting. Put out small paper bags for used stirrers and perhaps small paper cups and some water. Honey tastings have become very popular.

Although plant sources for the member’s bees may seem to result in similar honey, bees are able to find some plants somewhere to make a beekeeper’s honey different from the neighbor’s honey. You could have a Honey Exchange. Bring one jar with your nice label and receive one ticket. At the end of the party cash in your ticket and select a jar of honey to take home. If you don’t bring a jar, you don’t get a ticket.

As the year is coming to a close we are receiving many requests for donations to organizations of various kinds. Honey bee and pollinator themed organizations would appreciate receiving some of those donations, whether large or small. The club can choose one, or perhaps two, as recipients of a donation. Here is where you can find information about some of these. Pollinator Partnership (www.nappc.org), Project Apis m. (PAm) (www.ProjectApism.org), Honey Bee Health Coalition (www.honeybeehealthcoalition.org), Pollinator Stewardship Council (http://pollinatorstewardship.org) If one or more are chosen then both East Cupcake and West Gumshoe clubs must be mentioned as the donors. Perhaps the organization chosen can send some promotional literature for the members to read before contributing.

Another way to receive donations would be to hang up a Christmas stocking, along with some promotional material nearby, and simply ask members to put at least one dollar in the stocking. The club Treasurer can then write a check to the chosen organization.

Or the donation money could come from a raffle or an auction. See if one of the beekeeping supply companies would donate an item or a gift certificate. Explain to the company that the proceeds from the auction or raffle would go to one (or more) of the organizations.

I know what dish I would take to the Christmas party. It’s from the National Honey Board. If many beekeepers are coming I think I would double the recipe. It is easy and quick to make and very delicious. Small bite-size mushrooms work very well. Take some toothpicks to stab a mushroom. 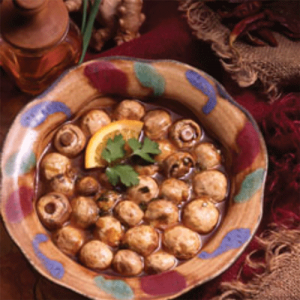 Combine all the ingredients except mushrooms and optional garnish in small saucepan. Cook mixture over low heat until hot. Place mushrooms in heatproof bowl; pour hot marinade over mushrooms. Cover and marinate three hours in refrigerator, stirring occasionally. Mushrooms can be transferred to a serving dish. Garnish with parsley sprigs and orange wedges, if desired.

(Makes four to six servings if used as a side dish.)

The host club decided to have a gift exchange – not the usual one, but it is truly an “exchange.” You may not end up with the one you originally chose. If you bring a gift – and it must be unwrapped – you draw a number from a container. Someone will have to make some small pieces of paper each with a number. The number indicates when it is your turn to go to the table and select a gift. The gifts are placed on a table for all to see. Someone in the club must bring a bottle of wine as the gift. Only one is really needed.

The party is over. At their next meeting the members of East Cupcake should take time to discuss the party – its successes and failures. Should the club do it again next December? If so, should any changes be made? Has there been any feedback from the West Gumshoe club? It is not necessary to make a definite decision about next December now but having a review of the club’s first attempt in having a party and being a host club is certainly important.

December is over. The New Year has begun for both clubs. It’s time to be thinking about honey bees!

Ann Harman plans parties and enjoys the holidays at her home in Flint Hill, Virginia.