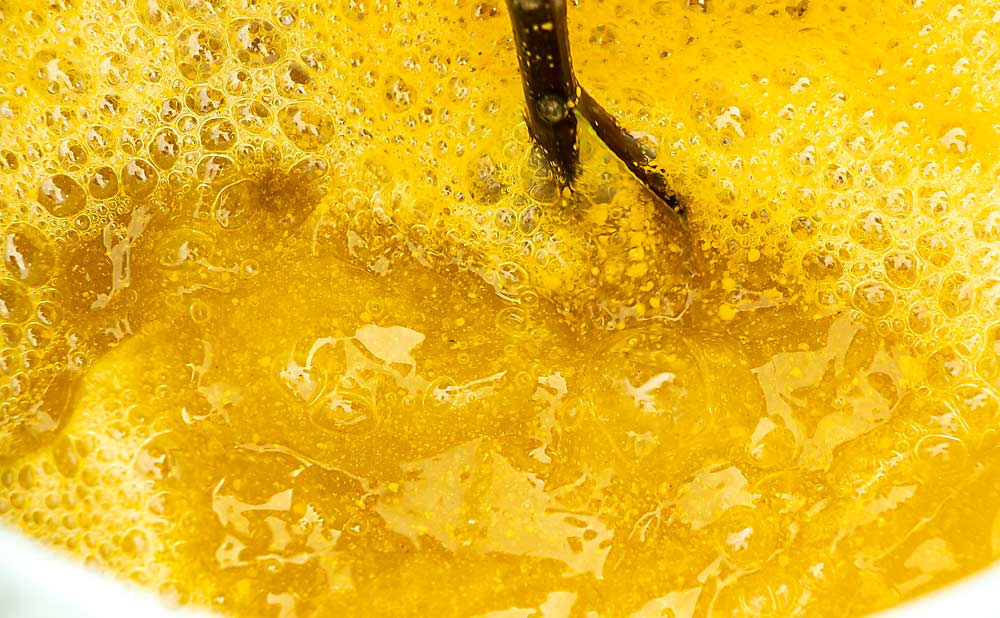 Pollen is stirred in a spray suspension during research trials in 2015 by Washington State University’s Matt Whiting in Prosser. Whiting has since improved the suspension and licensed it privately, while he continues his research into using it in a mechanical electrostatic pollination system under the banner of the University.(TJ Mullinax/Good Fruit Grower)

A Washington State University researcher trying to develop a mechanical electrostatic pollination sprayer is continuing his research while he has spun a portion of it into a private business.

Matt Whiting, a horticulturist at WSU’s Irrigated Agriculture Research and Extension Center in Prosser, has licensed the intellectual property for his pollen suspension and will make and sell it commercially.

He named his new company Peregrine Solutions but works through Firman Pollen Co. of Yakima, Washington, so customers may never see his name.

Meanwhile, portions of his research into the best ways to apply the slurry to budding trees will continue under the university with funding from the Washington Tree Fruit Research Commission and the California Cherry Board.

Since 2014, Whiting has been experimenting with how to best disperse his pollen suspension with an electrostatic chemical sprayer to boost fruit set beyond what natural pollinators, namely honeybees, can do alone. His ultimate goal is — in effect — to replace bees, which can be hindered by bad weather and poor bloom timing.

He is entering the final year of his most recent three-year, $150,000 funding cycle.

He admits results were iffy from his most recent trials, held on cherries in 2017 and 2018 throughout Washington and one in Angol, Chile. His work showed “no statistically significant effect” on fruit set for three of his four trial blocks.

He blames windy and rainy weather and tardy applications. In those four trials, his team applied the suspension past 70 percent bloom and at 94 percent at one point.

“We have data suggesting applications at earlier stages of flowering are more effective,” he said.

The outlier was a Regina block in Angol, where Whiting applied his pollen at between 60 percent and 70 percent bloom. The treatment boosted fruit set from 21 percent to 34 percent in some application rates — a 62 percent improvement.

In 2015 trials in cherry, pear and apple orchards throughout Washington, he boosted fruit set anywhere from 10 to 200 percent.
To avoid problems this year, Whiting plans to time spray applications at 50 percent to 60 percent of flowering. He also will continue to experiment with the rate of spray per acre.

As for the licensed suspension, Whiting believes he has the right combination of pollen, water and his proprietary mix. Artificial pollen has historically been applied as a dry dust using puffers, but Whiting and his team believe the suspension adheres better to flower stigmas. The trade-off is that pollen loses viability when it gets wet.

Besides Firman Pollen, Whiting has collaborated with On Target Spray Systems of Mt. Angel, Oregon, and with several growers. Some of those growers have begun using the electrostatic pollen system on their own, while Firman has planted an orchard near Yakima, strictly to produce pollen.