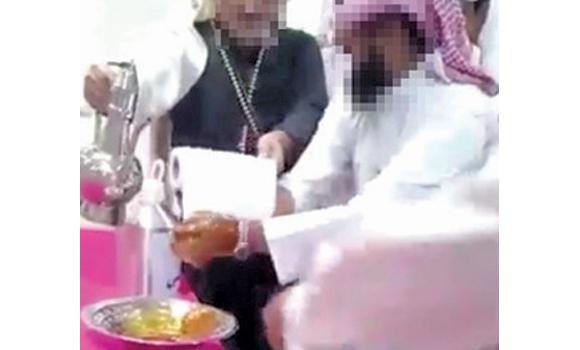 Scholars and tribal leaders have criticized citizens as extravagant and foolish who have been washing the hands of their guests with honey.

DAMMAM: The practice among some citizens of washing their guests’ hands with honey or oud perfume (Oud perfume is derived from the tropical agar tree, which is thought to originate in Assam in India. When the tree is infected by a mould known as Phialophora parasitica it reacts by producing a dense, dark and fragrant resin to protect itself. It is the resin-embedded heartwood of the tree that is the source of oud) has been slated as excessive and extravagant.

This comes in the wake of videos emerging on YouTube showing men at an event having honey poured onto their hands, which they then wash off with water. Some tribal chiefs and scholars have criticized this practice, saying it does not reflect traditional or religious customs, and should be discouraged.

Psychologist Sulaiman Al-Zaidi said that these people appear to be quite rich, which indicates this has not become common behavior in Saudi society. Some people also simply liked to record such events for public display even though there was no logic involved, he said.

Sheikh Saud Al-Phenasan described the people in the videos as foolish and extravagant. They should be reprimanded if they continue with this behavior because it can create discord in society, he said. Sheikh Oweidh bin Saeed, a tribal chief, said that these were not traditional acts. “We needed honey and oud in the past but people are now making use of them in a strange manner.”

In the May issue of this magazine (www.beeculture.com/bigger-picture-24/), Jessica Louque tells us about her day job, working as a research specialist, testing agricultural chemicals…